Do Fans Support the Zimmer-Cousins Combo? 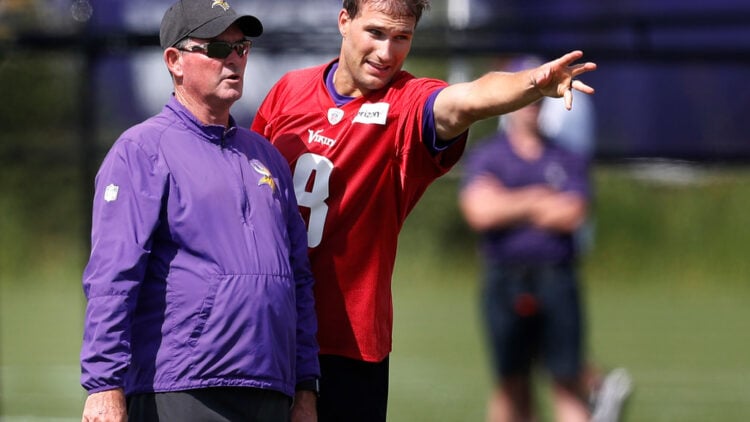 Image Courtesy of the Star Tribune.

The short answer is yes, a majority of Minnesota Vikings fans support the combination of head coach Mike Zimmer and quarterback Kirk Cousins. The duo does not equivocate an approval rating that Andy Reid and Patrick Mahomes would command, but the majority of Vikings enthusiasts for the three-years-running tandem of Zimmer and Cousins are in favor.

Generally speaking on the Vikings, which category are you?

I know many of you have kinda-sortas on this, and that's fine. But pick the one that most accurately describes you.

Two-thirds of Vikings fans – at least in an unscientific poll of Twitter respondents – stand by the current coach and quarterback. 1,631 folks opined. 6% oppose the Zimmer-Cousins grouping in totality. That is – they dislike both men and presumably prefer a “blow it up” strategy.

As evidenced by the commentary below the poll, many onlookers were flummoxed by the outcome. Discontentment regarding Zimmer-Cousins often feels rowdy and unremitting. Yet, in reality, the disapproval of the twosome is probably vocalized by those with the loudest voices or most time on their hands. For instance, it is significantly more fashionable to be disagreeable about the status quo than to go one out of the way to affirm support. The criticisms of Zimmer or Cousins are noisier than the consenting opinions.

Otherwise, this poll would appear utterly upside down. And on some Sunday afternoons or Monday mornings – generally after losses – it tangibly feels like a bulk of fans want change.

Evidently, that is false.

Majority Support for the Duo

67% support is noteworthy. There is no way to revisit what a Mike Tice-Daunte Culpepper or Brad Childress-Brett Favre approval rating would resemble, but percentages would likely vary.

Since Zimmer arrived in Minneapolis seven years ago, he has fostered a culture of defense – a revolution when compared to 2010-2013. In those four seasons, the Vikings ranked 29th in the NFL via points allowed. During the Zimmer era – 2014 to present – Minnesota ranks sixth in points allowed. That’s a 23-plank climb on the ladder. And, the “sixth” ranking was dragged to hell by the injury-riddled 2020 defense that ranked 29th leaguewide in points allowed. If 2020 is conveniently subtracted and the metric is 2014 to 2019, the Vikings were the league’s second-best defense in terms of points allowed. Only the New England Patriots were better defensively from 2014 to 2019.

Zimmer has inspired a winning culture in Minnesota. From the time he arrived to present day, the Vikings are the NFL’s eighth-best team via win percentage – 64-47-1 (.546). The teams with these acronyms have won more [in order of great to good]: NE, KC, SEA, PIT, GB, and NO. Of the Top 8, the Vikings, Steelers, Packers, and Saints are teams to not reach a Super Bowl during the seven-year window.

Higher on Cousins than Zimmer

If the poll is carved up by Cousins support-only, then 86.7% of respondents endorse the Vikings quarterback as the right man for the job. In the same vein, Zimmer draws 74.2% support. Perhaps fans are slightly souring on Zimmer more than Cousins. That is what the survey indicates.

It is understandable that the Vikings faithful enjoy Cousins. He has authored the fifth-most passing touchdowns in the business since donning a helmet with white horns. Cousins came to the Twin Cities in 2018, and only Patrick Mahomes, Russell Wilson, Aaron Rodgers, and Tom Brady have dimed more touchdown passes. And that grouping isn’t too terrible.

For more context, consider this. During the three seasons before Cousins joined the franchise – 2015 to 2017 – the Vikings collectively threw 59 touchdowns. That ranked 26th in the NFL or seventh-fewest. With Cousins in 2018 to 2020, the team [Cousins] has notched 91 touchdown passes or 7th–most in the industry.

Cousins took the franchise from seventh-worst to seventh-best in touchdown passes in a three-year span. Sometimes – it seems nobody cares. The poll disagrees.

2021 as the Almighty Judgment Day

High approval rating or low approval rating, 2021 is a pendulous season for the franchise. Zimmer will not be able to survive a year with a ho-hum win-loss record. The Vikings must win a playoff game or get damn close to it. The honeymoon for Zimmer arguably ended when the 2018 season ceased. It was Cousins’ maiden voyage in purple, and he was theorized as the missing link. The defense took a step back that season, Dalvin Cook was lost for the year early on, and Cousins did not perform well down the stretch.

Then, the team stunned the Saints in a road playoff game the following season. But it has not been enough to provide Zimmer with wholesale job security.