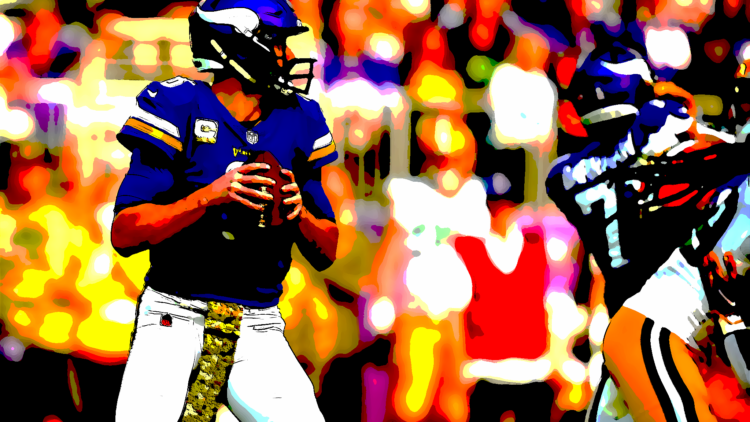 Before the Minnesota Vikings game versus the Green Bay Packers commenced in Week 11, news trickled out that Aaron Rodgers was dealing with a bad toe. Add that nugget of knowledge to an already lengthy Packers injury report, and perhaps a diminished, tame version of Green Bay would show up at U.S. Bank Stadium.

Rodgers was magnificent — especially in the 2nd Half — tabulating 385 passing yards and a cool four touchdowns on a wild afternoon in Minneapolis. The man is 38 years old, which is elderly by non-Brady NFL standards. But on Sunday in Minnesota, the Packers signal-caller was vintage Rodgers.

However, it wasn’t quite good enough.

The Vikings quarterback, Kirk Cousins, dazzled too, accruing 341 passing yards of his own with three touchdowns as a complement. Cousins is infamous for a sizable contract — of which many folks believe he isn’t worthy — yet the man earned his money in a game that dragged the Vikings back to a 5-5 record.

For roughly ten straight seasons, 2010-2020, the Vikings were an unabashed run-first franchise. Ever so gradually, that philosophy is changing, probably because Cousins is accountable for 22 touchdowns to just three turnovers in 2021. You’ll have to close your ears for this one: Those are budding MVP numbers despite the narratives that prosecute Cousins as a mediocre quarterback.

The men and women who chide Cousins for mediocrity really have one major grievance — he is paid to play elite, so he should perform as such when the game is on the line. And in nearly every game of the 2021 season, Cousins has placed the Vikings in a position to win, particularly late in games.

Rodgers was arguably a bit more polished on Sunday — likely because he is, indeed, a better football player than Cousins — but the Vikings quarterback showed the grit necessary to guide a team to the postseason.

When Rodgers connected with Marquez Valdes-Scantling on a 75-yard touchdown with two minutes to go trailing by seven, Vikings fans’ eyeballs rolled to the base of their skulls. The Hall of Fame Packers quarterback had done it again.

Yet, in a mind-boggling twist of fate, Rodgers did to the Vikings what NFL fans frequently say about him: “He left too much time on the clock for (insert QB name here).”

At U.S. Bank Stadium this weekend, the name was Cousins in that sentence. Cousins methodically drove Minnesota down the field, connecting on cold-blooded 3rd Down conversions time after time.

Cousins’ theatrics were good enough to win the day, 34-31, after the redemptive Greg Joseph tossed another game-winning field goal onto his ledger. Disappointingly, the Vikings defense tried to gift the game away to the opposition — like they’ve done several times in 2021 — but Cousins was clutch enough to change the course of the Vikings topsy-turvy season.

You don’t read it often (anywhere, really), but a Vikings quarterback got the best of Aaron Rodgers in mano a mano fashion this time.

A mighty sequel for January 2, 2022, is therefore established at Lambeau Field.