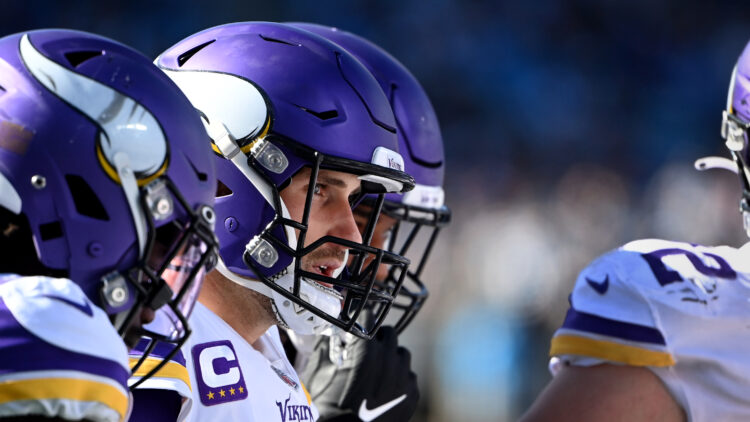 This Vikings season has been as topsy-turvy as riding the Wild Thing.

Yet after a massive victory over the Packers, the Vikings find themselves at 5-5 and in possession of the #6 seed in the NFC with a relatively smooth schedule ahead. However, they now face a massive game this week against the 49ers, who are also 5-5 and in the wild card hunt.

The NFC has been wide open, and at this point, there appear to be five teams fighting for the final two spots in the NFC playoff field: the Vikings, 49ers, Philadelphia Eagles, New Orleans Saints, and Carolina Panthers. Each of these teams has found winding roads to get to where they currently are, and each team has its own sets of faults and strengths.

Here, I will size up the Vikings chances in comparison to the other four teams vying for playoff spots.

Looking at the remaining games for each of these teams, it seems like the Eagles appear primed to find a spot in the wild card. Although they began with a rough start in large part due to injuries, the Eagles only have one remaining game against a team with a winning record, which is in Week 18 against the Cowboys.

The Eagles, after going through some rough spots offensively, found their identity as they have evolved into a team that runs the ball heavily. They have leaned towards the strengths of their quarterback Jalen Hurts, employing a large portion of their offense to the running game.

They were without starting running back Miles Sanders for the past several weeks. Because of that, Philadelphia leaned mostly on veteran Jordan Howard and rookie Kenneth Gainwell, but with the return of Sanders, exploded offensively on Sunday vs. the Saints, scoring 40 points.

Their defense has also come alive thanks to the contributions of former Viking killer Darius Slay. Fortunately for the Vikings, they will not play the Eagles head to head. However, of the potential competitors with the Vikings, the Eagles have the most compelling case.

The San Francisco 49ers find themselves in a similar position as both the Eagles and Vikings in that they have a roster full of good players.

Still, partially due to injuries and partially due to some lapses in big moments, they struggled early, only to find their stride now. Sunday afternoon’s game in Santa Clara between the Vikings and 49ers could be pivotal for the NFC wildcard chase, maybe even more so than last week’s matchup between the Eagles and Saints.

Although the 49ers offense struggled mightily early on, they came alive in the past two games due to the return to health for George Kittle and the danger Deebo Samuel poses to opposing defenses.

Even if they to lose on Sunday, the 49ers still would have a chance at the third wild card spot with games against the reeling Seahawks and Falcons upcoming — although they have three remaining road games against teams with winning records (Bengals, Titans, Rams).

I will go as far as to say that whoever wins this Sunday’s game at Levi’s Stadium is in prime position for not only a wild card spot but potentially still have a chance at the #5 seed, whereas the loser will need to avoid any further slip-ups to stay in the race. I won’t go as far into the 49ers as other articles are upcoming this week from VikingsTerritory on this all-important game, but the 49ers, at this point, remain a threat to the Vikings playoff hopes.

Two other teams that entered Week 11 were seemingly in the driver’s seat for the NFC wildcard but are now on the outside looking: the Saints and Panthers.

Both teams structurally are in similar situations. Both teams lost their starting quarterback to injury and were forced to rely on backups: Carolina sent a Superman signal for Cam Newton, while New Orleans now depends on former Vikings backup Trevor Siemian to lead them.

Each team is still in the hunt, with the Panthers at 5-6 and the Saints at 5-5. Both teams have very stout defenses, but due to their many injuries and deficiencies, could be anywhere from still in the playoffs to possibly fading away.

The Panthers have a more manageable schedule, although both teams still have games with the Bills on their schedules. Carolina, compared to the Vikings, doesn’t seem as significant a threat as with Sam Darnold at quarterback. They struggled almost the entire game against the Vikings until the fourth quarter.

The Saints passing game has been up and down, partially due to the lack of talent at WR and due to the ever-changing quarterback situation. Both teams have strong enough defenses to win games, but their offenses don’t strike me as scary enough to go on massive runs throughout their final six or seven games.

It seems that both the Panthers and Saints are fragile enough for the Vikings not to be as concerned about either jumping them. However, both the Saints and Panthers have beaten teams they weren’t supposed to, and if either team is healthier than they currently are, that could change the outlook of this playoff race.

The issue will be if they can outdo the other four teams they are battling. It will be a stressful yet exhilarating next seven weeks for Vikings fans to be scoreboard-watching and to be examining who will be in the NFC playoff picture. But Vikings fans are accustomed to stress.