6 Things To Watch for in Vikings-Seahawks 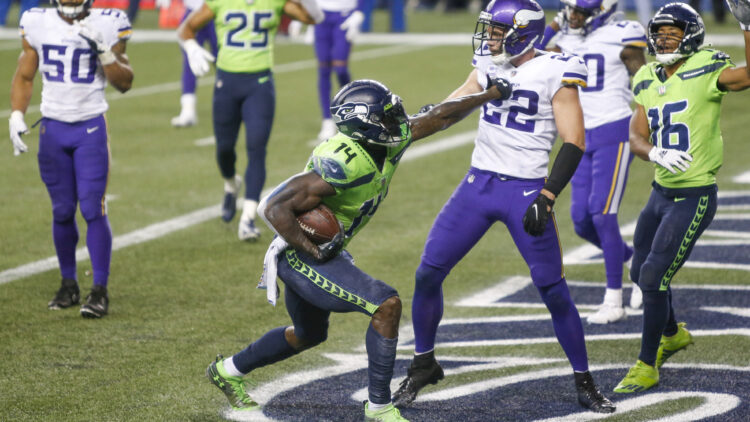 The time is finally here. After 636 long, excruciating days, fans are allowed back in The Bank. Fans will be loud. Fans will be raucous, and fans finally get Seattle at home. To say payback is long overdue would be an understatement. The fans want blood.

Whether it was Dalvin Cook exiting in 2020 with an injury just before being able to deal the final blows, Seahawks linebacker Bobby Wagner illegally launching himself off of teammates in 2018 to block a field goal attempt, or Blair Walsh hooking the game-winning field goal in the 2015 playoffs (viewer discretion advised). The Vikings are due.

Oh, and don’t forget the sweet sound of the Gjallarhorn.

On Friday, it was announced that Seattle’s starting RT Brandon Shell would be out on Sunday with an injury. His backup, Jamarco Jones, is a third-year pro out of Ohio State. Jones has received game action each season in the league, usually starting a few games a year. This is an advantageous matchup Danielle Hunter should exploit — and exploit often. Look for Hunter to add to the four sacks he has on the season so far.

While Hunter appears to have returned to his 2019 form, the defensive line as a whole has not lived up to expectations yet. The defensive line was arguably the worst unit on the 2020 team, and numerous high-profile players were signed as free agents or returned from injury/opt-out. So far this season, they are matching the 2020 output. Unfortunately, that is not going to get it done for a team that has playoff aspirations and the rest of the defensive functions on the front four being stout.

During the first half of the Week 2 contest against Arizona, Cook injured his ankle. He would return before halftime and appeared to be the same Dalvin. Early in the 4th quarter, Arizona defensive end JJ Watt hit Cook low and hobbled him further. Cook is the engine of the offense and is critical to what the Vikings do on offense. RB2 Alexander Mattison is serviceable but doesn’t bring all the intangibles that Dalvin employs. Cook is currently tied for the league lead with 14 missed tackles on runs. He is vital for a victory, rest assured.

The similarities between these two quarterbacks are eerie, to say the least. Both Cousins and Wilson are experiencing excellent starts to the season. Both are worthy candidates for MVP votes. Since the start of 2019, each has had 20 games with a 100-plus passer rating, the best in the NFL over the timeframe. The longest active streaks of pass attempts without an INT? You guessed it, Cousins (162) and Wilson (124). They rank 2nd (Wilson, 91.3) and 3rd (Cousins, 88.3) with the highest passing grades when kept clean. And there is this tidbit too.

That's it, and they play each other Sunday.

MIN DBs vs. Lockett and Metcalf

Lockett has started the NFL season on an absolute tear. So far, he’s accumulated 278 yards on twelve receptions and three touchdowns. His counterpart, Metcalf, has 113 yards on ten receptions and one touchdown. The Vikings, meanwhile, have coughed up 588 yards on forty-nine receptions and five touchdowns over two games. Busted coverages and other errors manifested, typical of a group still attempting to get in sync with one another. One positive: Patrick Peterson appears to be the shutdown corner Vikings fans sought. Whoever he guards should have a relatively quiet day.

The missed field goals and PAT’s from Joseph are a given here. He’s got to hit them if, particularly when they are needed. To date this year, special teams, on the whole, have been very good. There were a few punts last week against Arizona that probably could have traveled a little farther in yardage. The blocking nearly broke down on the roughing penalty called against the Cardinals, too. The kick and punt coverages have been phenomenal, though, as has the kick and punt returns. With rookie Ihmir Smith-Marsette fielding kick returns, he has yet to get happy feet and return a deep kick for negative gain. Dede Westbrook rebounded from a muffed punt to have a few nice returns as well. What was once a weak link of the team is suddenly becoming a strength. Kicks for points aside. Sorry, Greg.