The Vikings Trenches Are Controversial. Again. 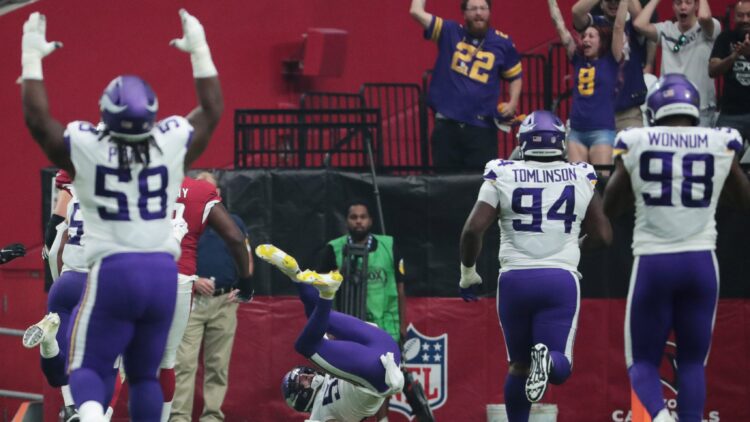 It seems like the Vikings do this every year. They spend all off-season making moves to improve a unit that has been deficient the year prior. Money is spent on high-profile free agents, as is draft capital. Sometimes it pans out. Sometimes it doesn’t — and it’s back to the drawing board.

For the first time since 2015, the Vikings may finally have a competent offensive line.

The defensive line, not so much, but we’ll get there.

Through two games, the offensive line has performed at a spectacular pace. For a unit that was borderline dismal last year, this is very welcome news. This group was so excited about protecting quarterback Kirk Cousins that they accumulated numerous false start penalties to start the season.

They also posted the 5th-highest team run blocking grade so far this week.

Once Darrisaw takes over for Rashod Hill, this OL has exciting potential.

Cousins is the largest benefactor of this success. Pro Football Focus has Cousins ranked as the most accurate quarterback with a clean pocket this season. Want more? *Somewhere, Kylo Ren is shouting for more.* Over his past 16 games, Cousins has recorded a passer rating of 90+ or better, ranking him second in NFL history while tucked in between some Manning fellow. Protecting a quarterback, one who is primarily a pocket passer, works — go figure.

The defensive line has been underwhelming so far this season. This is disappointing, especially after finishing 2020 ranking towards the bottom of the league and getting utterly embarrassed to the tune of six rushing touchdowns surrendered on Christmas Day. Nothing quite like rounding out a mystifying 2020 with a giant lump of coal.

The Vikings' defensive line ranks 29th in pass rush win rate (35%) and 31st in run stop win rate (25%), per ESPN. The corners haven't been great, but if you're wondering why Minnesota has given up 913 gross yards of offense and 61 points in two games, don't overlook the trenches.

The Vikings started free agency by signing defensive tackle Dalvin Tomlinson to a two-year, $22 million contract. He was acquired one year after the team signed defensive tackle Michael Pierce to a three-year, $27 million contract. Pierce sat out 2020 via the NFL’s covid opt-out, so 2021 is technically his first season with the team. Factor in the return of All-World defensive end Danielle Hunter — and this unit should be keeping opposing offensive lines up at night. One missing ingredient to this defensive unit, the absence of Anthony Barr, could prove more important than one might realize. Barr does his work in the shadows of a defense.

One thing that has remained consistent over the years — Super Bowl teams typically rank within the top-15 of offensive line play. It’s just science.

Are their outliers any given year? Sure. You typically do not see a team with an offensive line ranking worse than 20th overall. The same is attributable to defensive units. Having a top-15 defensive unit is critical to postseason success. Ironically, the top-10 offenses in NFL history have paltry Super Bowl success.

Minnesota will need to first win a handful of games before even being considered a postseason contestant, let alone a Super Bowl contender. The blueprint for success is there for them, should they decide to take it. Continued growth along the offensive line and cleaning up whatever the hell is going on with Zimmer’s treasured defense will help vault this team into the upper echelon conversation.