Vikings Season Isn’t Quite Over 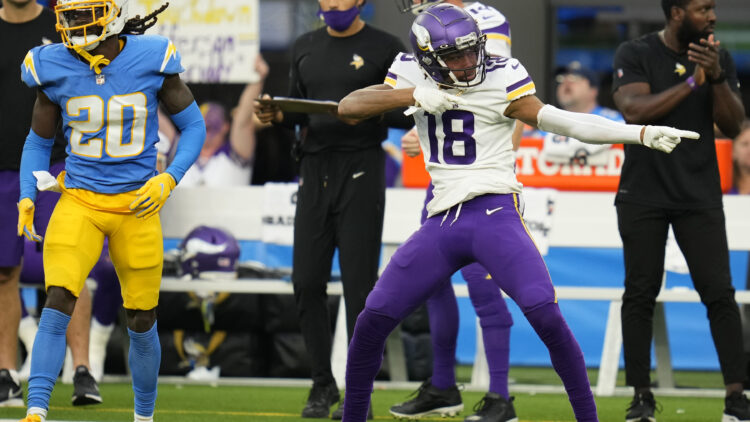 The Minnesota Vikings headed out to California in a difficult spot, needing a win to keep their season alive.

They did win, and the Vikings season is not over yet. The lack of strength in the NFC means hovering around .500 will keep this team in the playoff hunt. They should be better than that, but a catalog of close games with the Vikings coming out on the wrong side more often than not has led to where the Vikings find themselves now — a 4-5 record and four games behind the Green Bay Packers, though Green Bay still have their bye week to come. Unless the Packers season unravels drastically, the chances for an NFC North championship are dead.

If the Minnesota Vikings play the level of football they displayed on Sunday in Los Angeles consistently, they should comfortably take a wildcard place.

The big question is — can they?

It was by no means a flawless display. For once, there was no score on the opening drive, with both teams failing to trouble the scorers in the first quarter. The offense then put one touchdown on the board in each of the remaining quarters. That was key. We’ve seen this offense go through hot and cold spells all season, but on Sunday. It was a pretty even keel.

The importance of that is for the defense, a severely understaffed unit without Danielle Hunter, Michael Pierce, Anthony Barr, Harrison Smith, and Patrick Peterson. Other defensive players stepped up, notably Camryn Bynum again and, of course, the superb Eric Kendricks. Other than the Kirk Cousins fumble in the first quarter — which had us all thinking here we go again — the Vikings offense only went 3 and out twice in the game.

There were seven time-consuming drives of seven or more plays, giving them the time of possession edge of 36:15. Compare that to last week against the Ravens where the Vikings offense gave the ball straight back four times and only had a time of possession of 23:40. The defense started well last week. But if you put them under that much pressure against an elite quarterback like Lamar Jackson, they are going to crack.

This week they didn’t let Justin Herbert build that pressure, and a well-rested defense was sent out onto the field. Vitally, when it mattered, Kirk Cousins and his offense delivered. Justin Herbert was left to sit on the sideline as time expired, and the Vikings finally finished a game comfortably. We’ve never been so excited to see a succession on QB kneels.

To steal a quote from the Greek philosopher Aristotle; one swallow does not make a summer. Mike Zimmer and Klint Kubiak found a formula for success in California. Can they now repeat that formula consistently? Consistency has been this team’s Achilles heel, and time is running out.

What better way to prove themselves than a win over Aaron Rodgers and the Green Bay Packers?

A big win in Los Angeles brought green shoots of optimism back to the fan base. The Vikings season is not over, but for us to start to truly believe again, the Vikings must similarly slay the Green Bay Packers this coming Sunday.

Also Read: Why Diggs’ Exit Is Unlike Anything to Do with Justin Jefferson. For Now