Vikings Should Already Regret Not Signing a Free Agent Guard 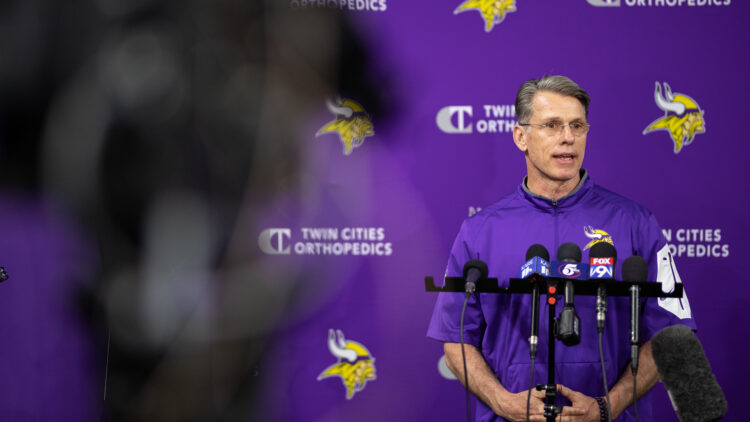 Success this season depends on how the offensive line holds up. It sounds like Groundhog Day, right? You would think after paying a quarterback who really needs a good offensive line to thrive a load of money after three years of atrocious pass protection, particularly from the interior, everything would have been done to fix the problem, right? Not so much. The sheer incompetence of last season’s defense needed attention, and Mike Zimmer went all in to fix it. It shouldn’t be a surprise. A defensive head coach needs his defense to be a Top 5 unit to make up for an almost inevitable turnover of successful offensive coordinators to promotions – Pat Shurmur, Kevin Stefanski.

The defense saw nine free agency signings, who all made the squad to start the season. For a long time, wide receiver Dede Westbrook was the only addition on the offensive side of the ball, as well as backup center Mason Cole, who was acquired via trade from the Arizona Cardinals. An unfortunate season-ending injury to tight end Irv Smith Jr led to the bolstering of that are with Chris Herndon via trade from the New York Jets and free agent Ben Ellefson.

The draft was used to bolster the offensive line. There weren’t too many complaints when left tackle Christian Darrisaw was drafted in the first round, followed by guard Wyatt Davis in the third. Darrisaw’s injury leading to him missing the start of the season wasn’t foreseen and has been unfortunate. With Mike Zimmers’s tendency to not play rookies straight away, I certainly expected us to address the O-line depth in free agency, and I’m still surprised we didn’t. Even more so once Darrisaw’s injury concerns surfaced.

As explained by Dustin Baker here, the only viable option to bring in at tackle now is Russell Okung. I think Ezra Cleveland isn’t built for the guard spot, and he should be the next man up at tackle. It just doesn’t feel like those options are going to be explored. Our first choice line comprises four tackles and a center. It just doesn’t feel right to me. The rest of the squad is rounded out by two more tackles, a center, and a rookie guard. One natural guard in the squad, adding a veteran presence to the mix, made sense to me, but that’s not the root we went took.

Post-draft, there was optimism for an improved O-line. What we saw this past Sunday was just about as bad as it gets. Penalty after penalty, pass blocking was as poor as ever, and pressure after pressure was allowed on quarterback Kirk Cousins. Many more performances like last Sunday, and something is going to have to happen before this season is over before it even got started.

Brian O Neill was his usual solid self and showed why it was so important for the Vikings to tie him down to his recently signed bumper contract. Oli Udoh had a reasonable game for a first start at a new position. He looks built to play guard, which gives me hope that this might be a tackle-guard conversion that could work.

One I’m not convinced is going to work is Ezra Cleveland. We were all pleased when he came in last season and was less horrible than Dru Samia. That doesn’t mean he was good. He wasn’t particularly good, and he wasn’t good either in Cincinnati. As previously stated, I’d like to see him at tackle until Darrisaw is ready because Rashod Hill facing off against last week’s NFC Defensive Player of the Week, Chandler Jones, is not going to end well.

Hill and Bradbury Are a Problem

Hill is fine as a backup swing tackle, but as your starting left tackle, he’s just not going to cut it. Then comes the biggest problem of them all. 2019 1st-Round pick Garrett Bradbury. I’ve tried to be patient, but when you pick a center in the first round, even just being good isn’t really enough. They need to be great. It’s Year Three, and Bradbury doesn’t look great, or good, or even average. He looks terrible. He can do some good things in the run game, but they don’t make up for just how bad he is in pass protection.

Add to that talk of bad communication and failing to identify fronts against Cincinnati. It’s not looking good. I don’t want to throw the towel in on Bradbury yet, but there needs to be immediate improvement this Sunday. There’s a backup center who we traded for from this week’s opponents waiting to step. Will he do better? I don’t know. I’m not sure he could do a whole lot worse, though.

It’s going to be tough on Sunday in Glendale. The Cardinals are rightful favorites to win the game. It’s going to take a huge performance from the Minnesota Vikings to win this one, but anything is possible in sport. It’s that little bit of hope that keeps us fans going. To stand a chance against that Cardinals pass rush, we need some big performances. My fear is we just roll out with the same 5 guys and hope for the best.

I’d like to see that line sent out, with Mason Cole waiting in the wings if Bradbury struggles as much as last week. I’m not confident that’s what we’ll do, though. I do think we might see tight end Ben Ellefson active this week to help with blocking. Will that be enough? I’m not confident, but we will find out on Sunday.