If the Darrisaw Situation Worsens, Why Not Russell Okung at LT? 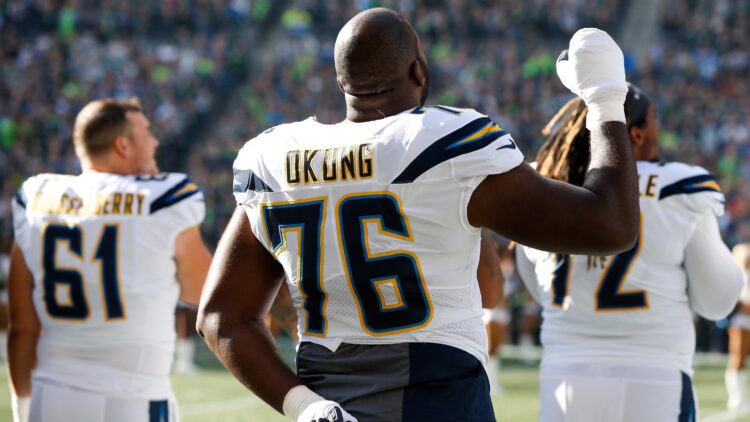 The offensive line performance by the Minnesota Vikings in Week 1 was lackluster, and the spirit of that sentence has been typed by this website almost weekly amid the last seven years.

The “difference” this season was supposed to be a revamped rendition of trenches, fortified with youth and homegrown commodities. While the youngsters and drafted-our-guys mentality may still come to fruition, nothing of the sort was on display versus the Bengals.

Riddled with penalties, the Vikings offensive line was not good, allowing quarterback Kirk Cousins to hit the ground via sack five times. Too, Cousins did hold the ball too long on a few plays, so he is not absolved from fault. But the onus – per usual – was more attributable to poor pass protection than Cousins’ play.

Christian Darrisaw was the exciting new solution, drafted from the 1st Round of the 2021 NFL Draft. To date, he’s made zero impact, opting for a surprise second surgery late in the summer. His timetable to see the field is up in the air. Darrisaw may play next week; he might play Week 1 of 2022.

So, Rashod Hill is the man tagged for left tackle duty. And he fired up a 49.7 Pro Football Focus grade in Cincinnati, with Chandler Jones — who record five sacks by himself in a single game on Sunday – on the menu for Week 2. Horror film screenplays are seldom scarier than that itinerary. In all likelihood, Darrisaw will not be ready – he hasn’t practiced much and needs proper conditioning – indicating Hill will get the LT1 nod yet again in Arizona.

What’s more, the whispers around the Twin Cities about Darrisaw’s outlook are cryptic and fear-inducing.

Local media members have been speculating on when Christian Darrisaw could see the field, and the outlook isn’t exactly bright https://t.co/EdPu3NJGCt

A sentence like that from the Sean Borman tweet is the last thing one wants to read pertaining to a left tackle who was slated to be the problem solver for an offensive line. If one is interested in knowing what the pathway to an IR trip resembles for a rookie, this is starting to feel like an example.

Now what? Roll with Hill and buy a prayer book? It might be the actual solution. Only Blake Brandel – an untested backup to the backup – is available to substitute for Hill at the moment.

Then, the free-agent wire is slim pickings. The only man who could “save the day” in the event of an extended Darrisaw absence is Russell Okung. His savior to the line should not be considered a sure thing, but it might just be an upgrade to the Hill-Brandel sandwich.

The Vikings have the money for it. General Manager Rick Spielman holds about $4.5 million in remaining cap space. In theory, that would be enough to sign Okung for the remainder of 2021.

Minnesota allegedly inquired about Okung in the past, and this might be a longshot. Yet, he is a noteworthy left tackle – and the Vikings will need one if Darrisaw misses more time.

Okung is 32 with two Pro Bowls and a Super Bowl ring to his name. If he’ll listen to the phone in the event of a Darrisaw-less season, the Vikings should explore his addition to the roster. Let’s face it – Minnesota will not make a serious playoff push with a flimsy left tackle situation. It just doesn’t work that way.