No, The Vikings Aren’t Tanking

In Portuguese, there is slang to describe when someone rushes into things or conclusions too fast. We usually use it when he or she falls in love way too quickly, but it can be used here as well. We say that the person is “emocionado.” Yes, after only one game, some people believe we should tank the season. I know it was a loss to the Bengals, a team that we should’ve beaten, but that’s the beauty of sports – it’s totally unpredictable. And, at the end of the day, the battle for the division crown starts with everyone 0-1, so no major losses. It’s also better to lose this type of game than to win and get a false sense of security.

Most of the problems we had during the game are fixable. Rashod Hill will be gone as soon as Darrisaw is healthy and ready – hopefully very soon. Hunter showed some flashes, but his rustiness is understandable, and Barr’s absence to the run game is probably bigger than we thought. The difficulty to run with 11 personnel was clear, and the offensive playcalling was bad. The lack of playing during the preseason is probably what led to the missed tackles, so hopefully, those will also be fixed. 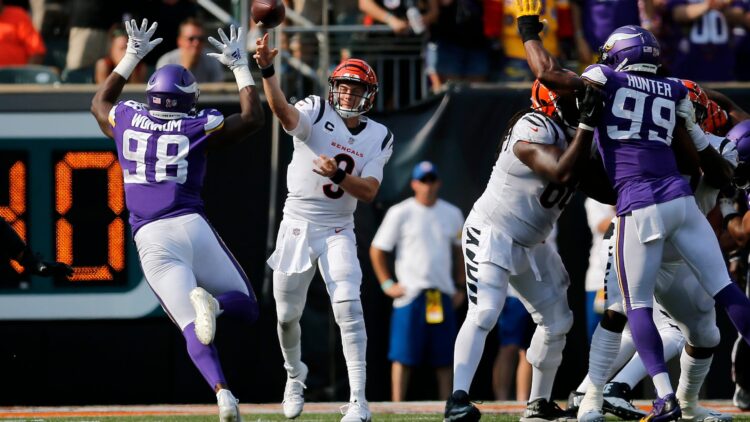 We have bigger problems to worry about – literally. Once again, our offensive line struggled, and that’s an understatement. Personally, I don’t like to use PFF grades as an argument. Nothing against them; I just don’t like it. However, when three of the offense’s five worst grades are linemen, it’s just impossible to ignore. Rashod Hill we expected to be bad, but Cleveland played poorly. Udoh struggled and had an unnecessary roughness call that I’m still trying to understand why he did it. Bradbury may have been our worst player Sunday, and he showed little improvement in pass pro during his 33 starts. O’Neill played well after signing a big contract, and I’m hopeful he can build on that.

The NFL season is a short one, but we can’t throw everything away after week 1. If the struggles go on, then we have reason to panic. Now, to the second part of this text.

Tanking in the NFL is a Stupid Idea

Don’t confuse tanking for rebuilding. They’re two different things. Rebuild is what the Lions are trying to do since the ’60s. Tanking doesn’t work in the NFL. First, because the playbook is really complex, teams usually won’t do a huge trade mid-season. When the 49ers traded for Garoppolo, it took him more than a month to start for a 1-10 team. Teams that are one or two pieces away from winning will address that during the off-season, not October.

Secondly, a 3-5 or 4-4 team at the trade deadline can still play for a playoff berth. So we have a low supply and demand for a tank to happen. If a team only has two or fewer wins at the deadline, they aren’t tanking. They’re just bad or having serious bad luck – like we last year with injuries.

It’s great for the fans to shout “Suck for Luck” or “Tank for Trevor,” but it leads us to my final point: Draft is as far away from being an exact science as possible. And the impact that one rookie has on a team is small, even if we’re talking about a QB. It’s extremely rare for a solid team to end up with the first overall pick, and even if there are college players worth sucking for, they are even rarer.

So let’s pump the brakes and see if the Vikings can improve. If they do, I promise not to say, “I told you so.” If they don’t, I’ll press the panic button.