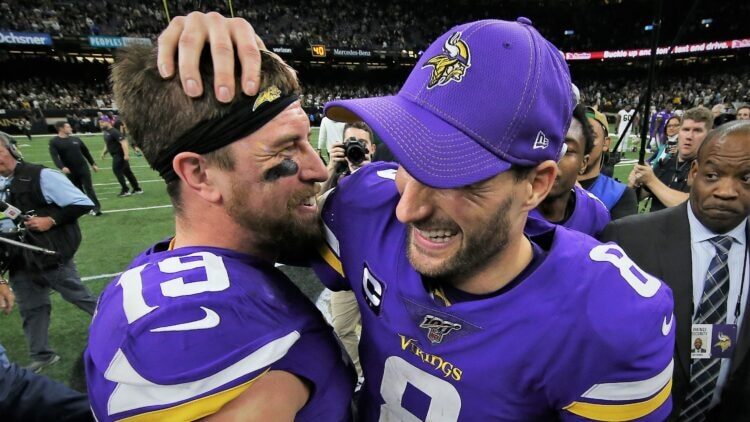 It’s been a rough few weeks for Vikings quarterback Kirk Cousins. Whether you find yourself in the “Pro Kirk” crowd or if you ascribe to the “Anti-Cousins” cabal, you cannot argue with the numbers. Sure, you can’t point blame wherever you’d like based on the narrative you’re interested in pushing, but whatever the cause, it’s been a struggle of late for the Vikings passing game.

A few weeks back we attempted to discuss what was going on with Cousins, After starting the season hot, and even entering the fringes of the M.V.P. conversation, “something” had changed. And that was the best way that we could put it at the time.

Truth be told, there were likely a bunch of things that factored into that “something” (fatigue, offensive line, offensive play-calling, opponents schemes, injuries, et al.), but stemming from the last two weeks one glaring deficiency rose to the surface that can no longer be ignored.

According to the last two weeks of Minnesota Vikings football, Kirk Cousins…mind you, the Kirk Cousins we have today, struggles to succeed without Adam Thielen on the football field.

In the past, we’ve seen Kirk overcome this particular obstacle. In one game apart from his friend Adam Thielen last season due to COVID, Cousins posted a fine day completing 34-of-45 passes against the Panthers and willing the Vikings to a win. Two years ago, over a six-game stretch without Thielen Cousins posted a passer rating of 109.7 and led the Vikings to a 4-2 record.

But this season, with this season’s version of Kirk Cousins and all of the factors from this team that are at play, it would appear as if Kirk Cousins NEEDS Adam Thielen as an option out on the field to get everything up and running properly.

The past two weeks, the Vikings and Cousins have been without Thielen who was suffering from an ankle injury. Cousins looked off, he failed to get the offense in any sort of a groove and only completed 47% of his passes. Over that two game stretch Cousins did manage 4 passing TDs but coupled that with 3 interceptions, and only 303 passing yards including the 87 yard stinker last week against the Bears.

Mind you, these two sub-par performances cam against two bottom third of the league defenses in the Bears and the Steelers. Furthermore, the Bears, who are the better of the two opponent defenses, were without their ENTIRE defensive secondary when matched up against Cousins and the Vikings due to COVID. So yes, that 87 yard stinker last week came against special teamers and practice squad players filling in at corner and safety.

So yes, it would then appear that having Adam Thielen on the field is an important tool to have in the arsenal for Kirk Cousins’ success. And today he gets him back.

According to multiple reports Sunday morning, the Vikings are expected to get wide receiver Adam Thielen back on the field after he missed the last two games with an ankle injury.

This should come as little surprise as Thielen was considered a game-time decision last week in Chicago. He worked out before the game and was deemed not healthy enough to give it a full-go, but another week of rehab looks to have him back on the field.

So Thielen brings his 64 receptions, nearly 700 receiving yards and 10 touchdowns, but more importantly he brings that comfort and rapport back for Kirk Cousins. He brings the opposite side of the field distraction back for Justin Jefferson, and he brings another offensive weapon back into the fold against the Los Angeles Rams.

And it couldn’t have come at a better time. The Rams defense will pressure Cousins, giving him multiple options to go to on quick routes, knowing exactly where Adam Thielen will be even before he makes the break, might be Cousins’ and the Vikings’ most important asset at combating this aggressive rams defensive front. Thielen and cousins have proven to be quite the duo connecting for more than 3,400 yards and 39 touchdowns during Kirk’s time in Minnesota.

For a QB who has had a new offensive coordinator in each of his seasons at the helm, has seen the offensive line shuffled on a weekly basis and has faced his fair share of injuries to pass catching options, having the comfort of at least one constant is a blessing.

Adam Thielen is that constant for Kirk Cousins, we’ll see how much it helps today against the Rams!