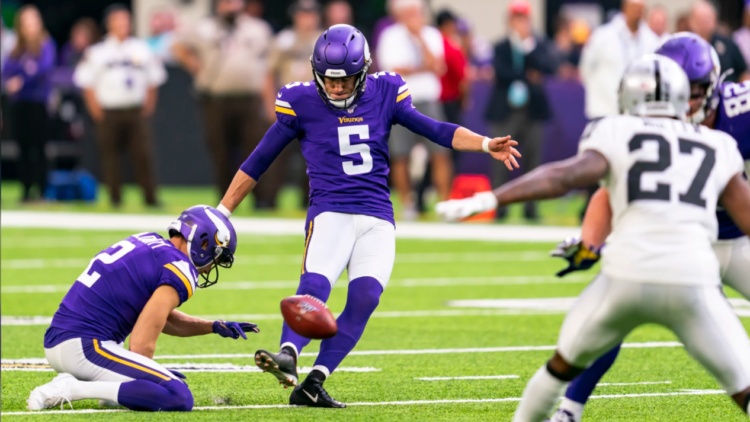 This article is part of a series focusing on the Minnesota Vikings’ salary cap. For this series I’m going to break down how much each player on the team’s roster counts towards the cap as well as shine a light on his current contract.

The field goal battery has been disrupted this season, and as a result Bailey is on pace to finish well below his career average make percentage of 86.0%.

Former NFL kicker Ryan Longwell thinks it’s just a matter of finding a rhythm with the new long-snapper. If that’s the case, there’s still a little time for the unit to stabilize as the team enters a potential playoff push. But there’s no question the Vikings envisioned a more stable season from their special teams units when they signed Bailey and Colquitt to extensions this spring.

“What I saw in Tampa is a guy that is just totally out of rhythm… That tells me that the change of snapper – whether they want to talk about it or not – threw off the cadence of the entire operation… With extra reps I see it as a 15-minute fix.” https://t.co/RabNyoxQ5X

Bailey, 32, has a $1.8 million injury-only guarantee that will become fully guaranteed on the 3rd day of the 2021 league year. If the Vikings decide to keep him, he’ll carry cap hits of $3.8M and $4.05M the next two seasons.

Because of his contract, it’s tough to see the Vikings releasing Bailey this season. It’d cost the team up to $4.2 million in dead money. But, seeing as Minnesota is already at a whopping $34.836M in dead money, the 6th-highest figure in the league, it’s certainly not out of the question if things somehow get worse.

Colquitt was also extended by the Vikings last offseason. The 35 year-old signed a three-year, $9 million extension with signing bonus of $2.15 million. With an AAV of $3 million, Colquitt is the 6th-highest paid punter in the NFL.

Along with the team’s other special teams units, he’s had a bit of a rough season so far. Two Colquitt punts were blocked at Detroit in Week 9. He’s never had more than two blocked in a single season. Colquitt is averaging 45.2 yards per punt this year, slightly down from his career average of 45.4.

Considering his sub-par play and fairly high salary for a punter, Colquitt ranks 32nd among 34 NFL punters in terms of value-over-APY. Colquitt carries cap hits of $3.216M and $3.966M the next two seasons. Like Bailey, $1.8M of Colquitt’s 2021 base salary guarantees on March 20th, 2021.

DePaola took over for Austin Cutting in Week 11 and has played four games as the team’s long-snapper. He hasn’t botched any snaps, but the field goal unit has been anything but consistent so far with DePaola snapping.

According to Chris Tomasson of the Pioneer Press, the Vikings still want to bring Cutting back to the practice squad. Seeing as continuity is so important for special teams units, it’ll be interesting to see how the team handles the position moving forward.

Currently, DePaola is 30th in terms of value-over-APY among 32 NFL long-snappers.