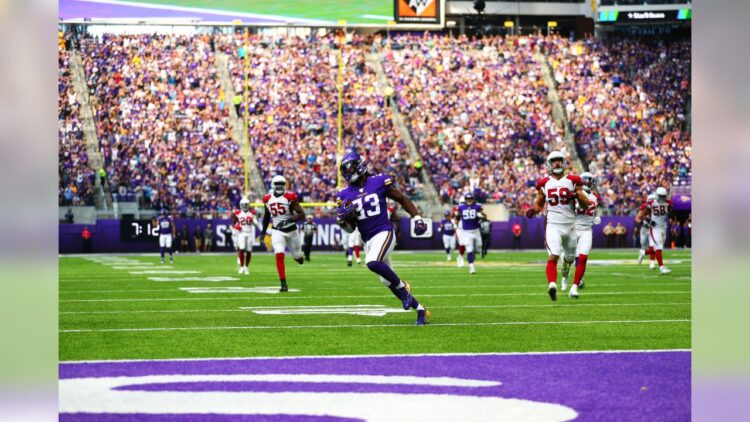 Cook signed a 5-year, $63 million contract extension with the Vikings one week ago today. Even after the team traded for Yannick Ngakoue and restructured the contracts of Riley Reiff (pay cut) and Eric Kendricks (signing bonus conversion), they were able to reach a long-term agreement with Cook one day before the season began. When you have Rob Brzezinski managing the books, I guess almost anything can happen.

In order to make a Cook extension feasible for this year and next year (when the cap will likely decline), the contract was structured in a way that makes the early cap hits affordable for the team yet also provides Cook with guaranteed money into the fourth year of the deal.

Stretching guaranteed money into year four is a little longer than your typical NFL contract, but when the base salaries are $825K this year (league minimum) and $1.5M next year, there had to be some incentives for Cook built into the contract, on top of the $15.5M signing bonus of course, the largest in team history paid to a non-quarterback.

Too much for a running back?

All-in-all, Cook’s deal appears to be fairly team-friendly if the 25 year-old can stay on the field. But not everyone agrees this move should have been made. On his most recent podcast, Jason Fitzgerald of OverTheCap.com summarized his thoughts on the recent running back extensions that have been hitting the headlines:

“History has shown us that the running back wears down,” Fitzgerald said. “I almost feel like we’re at the pinnacle of a cycle, and now you’re going to see a couple of flops… If you took someone like a Dalvin Cook — I bet Dalvin Cook’s got decent trade value. You could probably get something back for him if you send him to a contending team in the middle of the year — That’s better than doing this. I think, at least.”

While Fitzerald didn’t directly call out the Vikings front office, he referenced Cook’s deal frequently when explaining why he believes the recent trend of extending running backs is not a good move for NFL teams.

“Do you want to pay $17M for Dalvin Cook for basically an extra year and then turn around and cut him when you could have franchised him for probably like $8M or $9M? That’s bad business,” said Fitzgerald. “That’s not good for your team. I don’t know why [teams] keep falling down this rabbit hole. This is exactly what happened 15-to-20 years ago when the one-back system in the NFL was a bigger deal than it is now… For the most part, they all fell apart.”

The Vikings are not strangers to hefty running back contracts. Adrian Peterson received a seven-year pact in 2011 worth up to $100M. He won MVP the following year and played six more seasons in Minnesota, restructuring once in 2015.

Cook’s extension comes with plenty of risk and the team knows it. The Vikings are one of a few NFL teams that’s betting on their playmaking-running back to stay healthy down the stretch.

Abdullah’s base salary of $910K is the veteran’s minimum. The team gave the versatile 27 year-old a signing bonus of $137,500 to return this offseason, and he surprised some by making the team. With younger, cheaper options at both running back and returner, the Vikings could have opted to choose potential over experience to save a few dollars.

Buried behind three other running backs on the depth chart, it would be nice if the team were able to find more sneaky ways to include Abdullah in the offense and put his athleticism and speed to best use. There’s a reason he’s still around.

Mattison, or Deuce, as he wants to be called, is still only 22 years-old. The 2019 3rd-round pick is primed for another productive year spelling Cook. Featuring both Cook and Mattison, the Vikings have one of the most balanced backfields in the NFL. This year included, Deuce is under contract for three more seasons.

Boone has performed well enough in limited opportunities for other teams to take notice. The Vikings reportedly received an offer for Boone last year (a 5th-round pick), but due to injuries to Cook and Mattison at the time the team couldn’t afford to lose the depth — at least that’s what I’m telling myself. If the right offer presents itself, it may be worth flipping Boone for a future draft pick. In the last year of his current deal, he’s a restricted free agent after the season.

After earning his first trip to the Pro Bowl last season, Ham signed a four-year, $12 million extension in March. His $3 million AAV is third among NFL fullbacks, behind San Francisco’s Kyle Juszczyk ($5.25M) and Pittsburgh’s Derek Watt ($3.25M). An integral part of the Vikings’ offense, Ham will carry cap hits of $3M, $3.45M, and $3.8M the next three seasons. That seems a bit spendy for a fullback, until you realize…

• Was the NFL’s most elusive FB in 2019 (20+ snaps) per @PFF
• Led all FB’s in targets, avoided tackles after the catch and rushing yards after contact
• Has zero career penalties
• Is the only NFL FB signed beyond 2022pic.twitter.com/6g4BVv8Tbt

All salary information is from OverTheCap.com unless stated otherwise.