If the Vikings DO go WR in the first, This is who they should take… 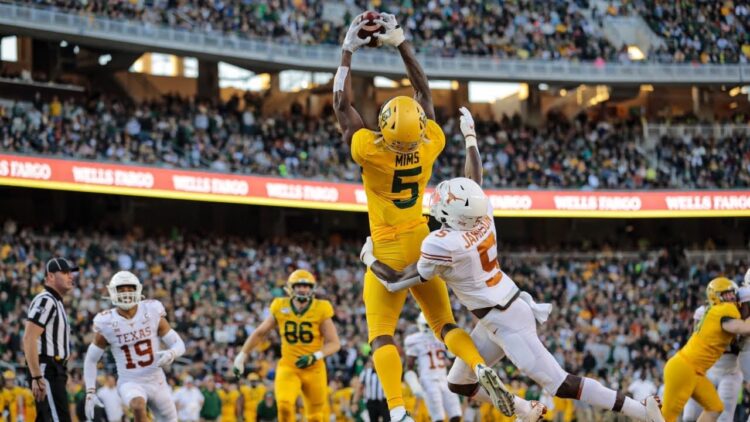 Wouldn't he look nice in purple and (less) gold?

Each year we do a litany of things for the draft. On draft day, we typically do some sort of live show combined with a live chat. On the second day of the draft, which falls on a Friday, the last two years we’ve hosted a Day2Draft Party somewhere out in the metro area. Last season, along with Chad Greenway’s Gray Duck Vodka, we hosted the event out at Legends Golf Course in Prior Lake.

Here is a video of me showing the set up for last years’ festivities:

Clearly this year will be different. On the first day of the draft, we’ll still be doing a live show/chat combo, but during the second day we will have to move the party online to our new(ish) community features!

That includes a message board/live chat combo, user groups, and our own internal Twitter-like software (VikesGeist). Click each buzz word to see those features live and to sign up!

The reason I bring that up is that the first thing that I wrote during the 2016 Draft was the following:

It was clear before that draft that the Vikings were going to go wide receiver in the first round. I’d done my due diligence and while I had heard buzz words like “Most Pro Ready” about Treadwell, there were objective signs that he was essentially a one-trick pony that, unfortunately, was a trick that wasn’t going to work in the NFL.

See, Treadwell ran a very slow 40 (although he was known to be quick, so he could beat someone to the 10-yard line, just not the 20/30/40/beyond). Which is fine, as the Vikings were looking for a receiver that could win the contested catches that the then Vikings passing offense was predicated on.

2016 was a different time, as was 2015. The Vikings offense ran (literally) through Adrian Peterson, and when they did throw the ball (because of Teddy’s then in-stride/down the field throwing issues) they typically ran pretty similar routes. The Vikings typically ran 10-15 yard button hooks, like this most famous Stefon Diggs touchdown before that other one that we now can’t bring up without feeling all sad and angry:

While that worked for a while, the reality was that the Vikings needed a receiver that was good at coming down with the ball despite being covered.

That was Treadwell’s whole brand.

However, the first sign that he wouldn’t be able to do the same thing in the NFL came from his combine results. When you think of a receiver that is good at contested/jump balls, what attributes do you think of? Vertical jump? Upper body strength? Broad Jump, even?

Look at his combine results (each percentage is as compared to the other receivers in the 2016 draft), courtesy of MockDraftable.com and you’ll understand why Treadwell’s one trick didn’t work in the NFL…

That brings me to the receiver that I want the Vikings to draft should they spend one of their first-round picks on a receiver (which all reports seem to say they won’t). With Stefon Diggs gone, the Vikings do need a receiver that can essentially… Do it all. Diggs was/is good at everything (except social media/interpersonal relationships), and it’s going to be hard to replace his contributions in general.

So, you have to look at what the team will miss MOST, and then hope that the combination of Adam Thielen, Tajae Sharpe, Beebe, Olabisi Johnson and the receiver they do end up drafting can hodge podge together the same results that Diggs provided.

The main thing that the Vikings will miss with Diggs now in Buffalo?

His deep threat ability, and what it meant for the rest of the offense.

When the Kirk Cousins and Adam Thielen started the 2018 season by tying the NFL record for the most 100-yard games to start a season, they were able to do that because team after team schemed to take Diggs’ deep threat ability out of the game plan. The thought was that they’d rather die from a death by 1,000 cuts (by allowing Thielen to dominate underneath) than by the one-punch death that Diggs scoring from anywhere on the field would bring.

While Thielen is able to essentially catch any ball thrown his way (thanks to his amazing body control and catch radius), the Vikings will still need someone playing opposite him to draw that double coverage down the field to open things up for Thielen and company on short and intermediate routes. I believe that considering where the Vikings choose in the first round, and who may be available in the late first round, that receiver is none other than Baylor’s Denzel Mims.

Now, let me make this clear. I’d rather that the Vikings didn’t pick a receiver in the first (and instead focused on fixing the offensive line), especially as there is a lot of talent to choose from in this year’s draft and with 12 picks, perhaps picking up more than one receiver on day’s two and three (Tyler Johnson for short and intermediate routes, and a speedster that could contribute both on the outside and the slot to go along with Johnson and Thielen?).

But this article is about what the Vikings should do if they do something they shouldn’t. Take a receiver in the first round.

First, the negative. Mims (like many receivers of his ilk) didn’t run the most complex route trees in college. NFL.com says things like “routes lack focus”, “needs to become more physical at the top of his route”, “despite size gets bullied at the catch point”.

Those are all things that will come with age/work and coaching. He can add muscle to his frame and thus strength, and he can be coached on his route work. The only things they list as a negative that aren’t coachable are (perhaps) the history of drops and poor success rate on “contest catches” and a seeming “competitive nature [that] is lacking in many phases”.

I believe that his positives greatly outweigh those negatives, though. According to NFL.com, again… I’ll just post a list:

If you need to be sold further, I implore you to read the Mims breakdown from our managing editor and draft expert, Kirby O’Connor.

While O’Connor was writing that piece before the Diggs trade, it doesn’t change the things that he said or scouted.

“Denzel Mims is an obvious answer to the Vikings prayers.”

“Mims was a track star in high school, and it shows in his film. He has long strides, and when he hits open space, he’s faster than almost anybody on the field. ”

“To go along with his long legs, Mims has extremely long arms. That means that he has a huge catch radius and can help negate bad throws by getting his hands to anything thrown close to him. His long arms also means that he can get his hands on defenders and block downfield.”

Kirby’s negatives align with the ones on NFL.com, essentially pointing out that Mims lacks “polish” that extends to his route running/expertise. With Mims potentially playing opposite one of the best route runners in the NFL (while replacing the best route runner in Stefon Diggs), I have faith that Thielen could become the Cris Carter to Mims’ Randy Moss by taking him under his wing and teaching him what he needs to develop at the next level.

Now, it’s hard to say where Mims will go in the draft as I’ve seen a lot of variance from site-to-site/scout-to-scout. Some have him going in the 20s, some have him going DAY 3 (or at least some sites say that some teams have Mims ranked as a day three pick ).

If that’s the case? Perfect! They could go the Saints route when teams like the Vikings pick players like Treadwell in the first round of the 2016 draft, meanwhile, current best receiver in the NFL Michael Thomas slipped into day 2.

That’s why some scouts/authors in the swampland that is New Orleans have the Saints like to Mims, as a quarterback like Drew Brees could get the most out of Mims (especially playing next to/across from a guy like Thomas). Again, my hope is that the Vikings don’t draft a wide receiver in the first round, but if they do they could do a lot worse than Mims, who has all the physical tools to become a real star at the NFL level. With quarterback Kirk Cousins signing a two-year extension beyond 2020, a guy like Mims (with his speed and catch radius/body control and size) could really, really develop in Minnesota.

Whether or not he could realistically end up in the purple really all depends on when the run for receivers starts in the first round (sound familiar?). In a draft that is considered by all to be receiver heavy, perhaps it’s best that the Vikings wait, and learn from the lessons of the first six seasons of head coach Mike Zimmer’s tenure and build the offensive line FIRST, not last (during the new rebuild of the Vikings that Zimmer is somehow overseeing, albeit partially).

However, it’s clear that the Vikings need fresh talent at the position and, I mean, just look at this dude in action:

Could do MUCH Worse.

What do you think? Comment below or click the Message Board link Here (and create a free account here) to engage with other Vikings fans as the off-season/season of social distancing continues!