Updated for the Bye – Top Position Needs For The Minnesota Vikings 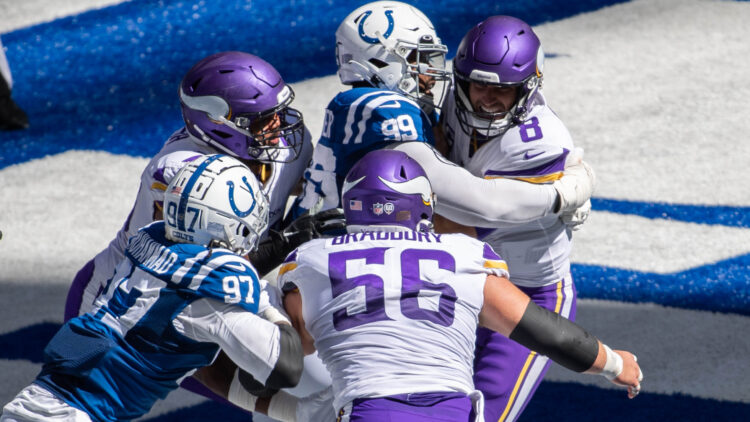 Now that we’ve reached the Bye week it’s safe to say that we can take a step back and analyze the 2020 season thus far. With that perspective, it’s safe to say that the Vikings are definitely not a good team. Sure, there have been glimpses of mediocrity or even, dare I say, greatness. But those have been too few and far between and obviously haven’t able to balance the disastrous play we’ve seen at times (like Weeks 1 & 2, the two minutes in the third quarter of the Seahawks game, all of Week 6, etc.).

The only way to improve, though, is to make sure that we’re aware of where these disasters stem from.

While a lot of those needs are glaring, others are more subtle. Either way, these needs are going to have to be addressed over time as they are rather extensive and may take several years of free agency or draft picks to really change the outlook of the Vikings.

It’s safe to say that prior to the 2020 season there has been no more divisive player than Vikings quarterback Kirk Cousins. I’ve been a staunch defender of Cousins, up until as recently as this morning (where I posited the question “If Cousins needs everything to be “perfect”, how has the Vikings offense improved since Week 3?”).

That article aged about as well as an avocado in August, as Cousins had the worst half of football of his career against the previously winless/hapless Atlanta Falcons. Even Cousins admitted that unless he turns things around he won’t finish 2020 as the starter in Minny. But what does that actually mean?

Like it or not, the Vikings are married to Cousins for awhile barring some sort of trade. They extended Cousins through 2022, with Cousins’ 2022 rate being filly guaranteed the second the 2021 season starts (to the tune of $45 million). That doesn’t mean that the Vikings can’t look towards the future, though, and the good news is that they might finally be bad enough to draft a quarterback early in the 2021 draft.

Can they #TankforTrevor still? Perhaps. But there are other good options for the Vikings in what is looking like a guaranteed top five pick at this point. However, since Cousins has shown the ability to put up elite stats (and even a 26:6 touchdown to interception ratio) even behind bad protection a la 2019’s 27th-ranked offensive line… Perhaps the better/safer move would be the next position of need.

Many will scream “Don’t you mean guard?” when reading this list, as the play of left tackle Riley Reiff has looked like a Hall of Fame career when compared to the play of guards like Mike Remmers, Tom Compton, Dakota Dozier, Pat Elflein and Dru Samia (while the jury is still out on 2020 draft pick Ezra Cleveland, who had his first NFL start today at left guard).

However, guards are much easier (and cheaper) to draft/sign than tackles and the Vikings have been paying Reiff elite tackle money for mediocre (at best) play. With their top five pick next season (and continued lack of cap space), it may make sense for them to invest their first-round pick on an offensive tackle that’ll be locked in to the rookie pay scale for his first four (or if things go well, five) seasons.

Hopefully Cleveland will be able to show some sign of positivity at left guard, which’d leave one more guard spot to go (unless Elflein can bounce back at the side and position he excelled at during his time at Ohio State) in free agency or later in the 2021 draft, to fix the source of frustration and failed potential that has dogged the Vikings since 2016.

As this is Zimmer’s Vikings, you can’t talk about the line without discussing the next/last position group on this list…

It may seem strange that the cornerback position is on this list considering all of the draft capital Zimmer and the Vikings have spent recently and during Zimmer’s regime on the position. After the Vikings added Jeff Gladney with a first-eound pick in April, they’ve essentially used four first round picks and a second round pick on the position since taking Xavier Rhodes in 2013.

So, while it makes sense to just wait to see if Mike Hughes, Gladney or Cameron Dantzler can develop, it’s also pretty evident that the Vikings need veteran help at the position as well.

While they’re strapped for cash now, hopefully cap wizard Rob Brzezinski can find enough to bring in a mid-level corner this upcoming off-Season to help coach this young unit on the field. That might also stop Zimmer (assuming he’s still in charge) from giving in yet again and wasting what could be the highest pick in team history on yet another corner.

Beyond that, though, it’s pretty obvious that the Vikings need help at the nose tackle spot on defense. However, I felt it was more important to explain the corner spot as it’s been the main Achilles on this defense thus far (although nose tackle is close behind) which is additionally terrifying because of Zimmer’s obsession with drafting corners.

That having been said, yeah, the Vikings are struggling on the year so far. However, there have been some glimpses of hope from (mainly) the offense that whomever is in charge in 2021 can build upon.

The above assumes that Zimmer and Spielman can actually learn from their mistakes, which, is a big question considering how the 2020 draft went. If they can, though, then perhaps they can perhaps live up to, I don’t know, any of the fan or even free NFL expert picks in the 2021 pre-season and potentially bring the Lombardi Trophy to Minneapolis for the first time since that layover on it’s way to Green Bay in the ‘90’s.