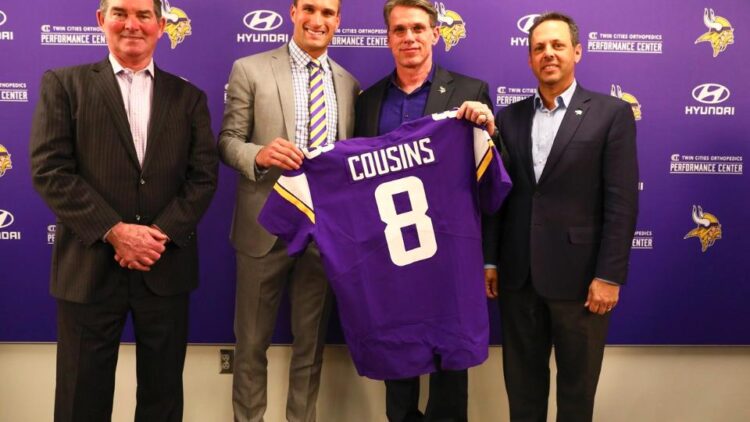 In 2019, Minnesota Vikings quarterback Kirk Cousins threw six interceptions against 26 touchdowns. In 2020, after a week 6 debacle against the previously winless Atlanta Falcons, Cousins has 11 touchdowns against 10 interceptions.

While there’s blame all over the field (and on the sidelines, and in the front office in Eagan) for the now 1-5 Vikings’ start to their already lost season, the fact is that Cousins has to play better. Sure, his job is pretty much set in stone as he is due too much guaranteed money through… Ugh… 2022, to bench. But the Vikings won’t win any more games in 2020 unless Cousins turns things around.

To his credit (which, Cousins always says the right thing so it gets a little old after awhile) Cousins came out after the game Sunday and essentially said that unless he turned things around he might not finish out 2020.

Kirk Cousins: "The reality is, if the pace I’m on in terms of the interceptions, if that were to continue, I won’t finish the season. … There’s a little bit of, you got to improve. Whether it’s them telling me, ‘Hey we gotta improve,’ or them pulling me; we got to get better."

The answer to whether or not he’d take a pay cut as well is still unanswered. I’m being facetious, but again, these are all hollow words unless Cousins changes something. That having been said, up until today’s meltdown it did feel like things were turning around on offense outside of a bad play here or there.

While the Vikings have done little to protect their investment in Cousins (which is a fireable offense in my opinion as it wouldn’t take much draft or salary cap capital to do that), he is being paid like an elite quarterback. While I’ve long said that Cousins doesn’t deserve the credit he deserves from this fan base, elite QBs don’t have meltdowns like this and he could silence his doubters in perpetuity if he was able to put this team on his shoulders and play at an elite level despite the lack of protection up front or defensive support.

While he appeared to do just that against Seattle, by executing that game plan at a masterful level, you could also argue that his post half-time interception was the difference in that game.

So, while I can’t imagine they’d bench Cousins, if he has another half like the first half he had today they’ll have no choice. That’d be the biggest nightmare to come from a season full of them. As he is due $45 million guaranteed in 2022, and unless the team could workout a trade to San Francisco (which’d bring other problems of the Garoppolo variety), it looks like the only hope is that Cousins will figure this out sooner than later.