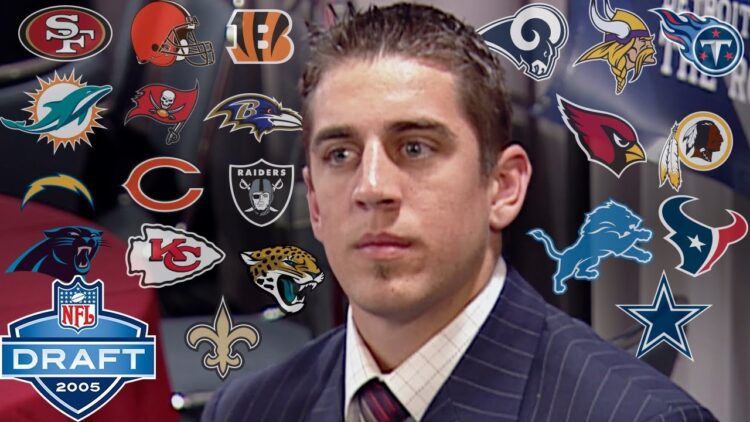 Because of the state of the world right now, there’s a lot of hypothetical scenarios being bounced around our internal chat system between our writers. One fun question that just popped in my head as I was perusing the morning news for ideas for articles for you all, is whether or not Aaron Rodgers would be such a smarmy, somehow sad and cocky at the same time, the player if he didn’t have to endure the humiliation that was his draft night. While we’ll never know the answer to that question, it’s looking like any potential 2020 Rodgers will be in the clear of any chance of history repeating itself as the NFL is looking at doing a “virtual draft” in 2020.
The 2020 NFL Draft was postponed a few weeks ago from the typical end of April Thursday-Saturday extravaganzer that it typically is.

Then it was reported that the draft would take place AS scheduled but be done virtually. Now?

According to ESPN’s Adam Schefter, they will also be changing HOW they conduct this year’s draft even more. According to Schefter, “High-Level officials from multiple NFL teams have begun preparing for the draft to take place from their homes”. Like telecommuting, at it’s best.

As it was already a foregone conclusion that the draft would be held virtually, though, so the caveat here is that the powers that be for each team wouldn’t get together in person to conduct the draft at their respective facilities, but rather they’d all teleconference from home.

If you think about it, outside of the pageantry of it all, there’s really no reason that every draft couldn’t take place this way. Or, at least, every draft since the advent of video teleconferencing, high-speed internet and (to steal a quote from X-Men Origins: Wolverine), a room full of men on high protein diets.

Although, there is still value in doing things face-to-face, especially when you’re on the clock. So, that could create some Vikings during the Red McCombs era issues like teams going over on said clock.

NFL vice president Troy Vincent has invited “several top prospects to be filmed live during the virtual draft”, per Inside the Vikings on SportsIllustrated.com. Beyond that:

The NFL plans to have a hub from where commissioner Roger Goodell will make the pick announcements and video connections to all 32 clubs as well as the homes of about 50 top prospects. Each group must have 10 people or fewer, each spaced six feet apart, observing rules such as hand-washing and keeping away anyone with a fever or coronavirus symptoms. Vincent said they are also exploring giving clubs a one- or two-minute extension on the clock to make trades.

We here at purpleTERRITORY Media have had our Day2Draft Party each of the past two years. Last year we held the party in conjunction with Chad Greenway’s Gray Duck Vodka. We will still try to do something this year, albeit online, which is probably for the best as our team here is also on a diet that’s high on one thing. Dollar Menu Items. Because apparently we’re active participants in the race to the bottom that is the publishing industry!

If you have any other questions about how COVID-19 will affect the NFL and its players, there’s a great article (also on SportsIllustrated) breaking it down.

Like Aaron Rodgers in April of 2005, keep everyone a minimum of 6 feet away (and try to not look sullen on the camera that is continuously pointed at your face for three hours!)!