The Silver-Lining of the Postponed 2020 NFL Draft

Each of the last two years we’ve hosted a Day2Draft Party at a local establishment, bringing Vikings fans from around the region together to watch the team hopefully find the final piece(s) it needs to get over the hump from the season prior. Two seasons ago we were still reeling from the NFC Championship loss to the Eagles, but had just signed Kirk Cousins to a then record breaking deal, and the thought was that with some help on the interior of the offensive line, the Vikings might not only be back in the NFCCG, but perhaps the Super Bowl.

Last season? The thought process was the same. Shore up that line and let Cousins and company put an offense on the field that is at least as great as the defense can be. While the results both years were mixed, it seemed like the one constant (outside of the yearly disappointment) is that we’d be getting together on Friday night at the end of April for years to come.

That’s reportedly not going to be the case this year, as it was reported that the 2020 NFL Draft is going to be postponed from it’s originally planned date of April 23-25 on the Las Vegas Strip. As of the writing of this piece there hasn’t been any confirmation as to when the draft will take place, but it has been reported that it won’t take place in Las Vegas anymore.

The Draft has been taking place in different cities in recent years, from New York to Nashville. The report from Pro Football Weekly’s Hub Arash states the following:

“According to my sources, Las Vegas is already canceled — it just hasn’t been announced yet — and the league will announce the Draft is being postponed until late May at least — as soon as the NFLPA’s decision on the new CBA is announced.”

It makes sense as to why the league would want to avoid perhaps the most tourist-y of tourist spots in the country in Las Vegas, as there are typically more visitors than residents in the that city at any given time (if you ignore the people living in the tunnels under the city).

With sports leagues around the country and world postponing and/or drastically altering when and how their games are played, this isn’t necessarily a gigantic surprise. The good news is that the combine took place as scheduled before things really started to spiral near the end of Act 1 in a zombie movie levels of panic, so teams have the information that they need to make their picks in the draft.

As far as the Vikings are concerned, this could be a blessing in disguise as they’re going to need more time to assess their needs especially when the Red Wedding, I mean, start of Free Agency begins next Wednesday the 18th. With the team recently cutting Linval Joseph, Xavier Rhodes and David Morgan (as well as allowing Everson Griffen to opt-out of his contract), and QB Kirk Cousins reportedly turning down “multiple team friendly deals”, the more time the team has to find free agents and assess things in the draft (up to and including potential trades, especially with the three new compensatory picks they received last week (Namely the third-rounder)) the better.

If you’re reading this, remember to wash your hands and avoid touching your eyes, nose, mouth or face in general. Considering how the typical response to any major Vikings move is this: 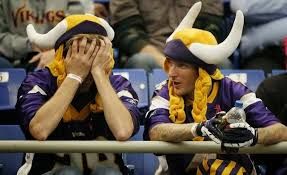 Perhaps, again, it’s best for everyone involved that they postpone the draft until COVID-19 is under control.