In what is more than encouraging comments from the player or his coach, Vikings wide receiver Adam Thielen was back at practice on Wednesday as part of the team and seems ready to take the field on Sunday in California against the Los Angeles Chargers.

Sure, we’ve seen plenty of this in the last month….

Barring a setback in practice this week, Vikings’ WR Adam Thielen is expected to return to the lineup Sunday against the Chargers after missing the past four games due to a hamstring injury, per league source.

But we’ve have NOT seen any of this–

Adam Thielen back at practice with a helmet today, going through individuals at the start. Everyone accounted for. RB Alexander Mattison is not practicing. 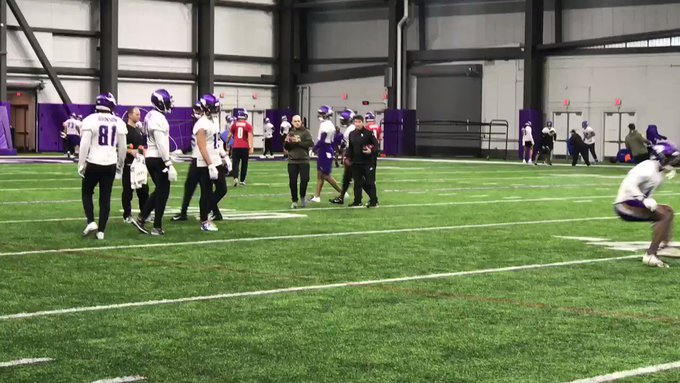 That is a Wednesday practice in which Adam Thielen, though limited in full practice drills, is actually involved in receiver patterns, starting and stopping, and catching footballs! Theilen may indeed look a bit tight in his breaks or slightly tilted on his axis at this point–but he’s out there.

He’s out there and the Minnesota Viking world can begin to rejoice.

What Exactly Has Santa Brought Us?

Just as the Vikings and their fans seemed to be moving onto the last three crucial games of their 2019 season with Adam Thielen as an afterthought, the two-time Pro Bowl receiver returns to bolster a 9-4 team with lots of talent and few delusions.

On paper, Minnesota is ranked 7th in both total offense and total defense. They are 5-2 without Theilen, though the five losses are against teams with a losing record and the two losses are against the playoff-bound Kansas City Chiefs and Seattle Seahawks.

It is these two losses in which Adam Thielen–if he can tune himself back into a credible weapon for this Minnesota offense–can make all the difference between victory and defeat, the road to the playoffs, and the NFL tournament itself.

Two losses and the number one wideout accumulating five catches for 29 yards. A glaring reason the Vikings lost both games.

The defensive coordinators for both the Chiefs and the Seahawks understood that Diggs, though an elite receiver, does not possess the speed or strength to beat a constant screening. The double-teaming kept him bottled up.

With the prospect of having a healthy Adam Thielen at his flank, Diggs immediately becomes significantly more dangerous against any opposition. Thielen’s presence gives Diggs room to run without a having an extra body and extra set of eyes always on him.

Help For The Cook And Kitchen Crew

The Vikings, who in 2019 rank 29th in the league in pass attempts and 2nd in times running the ball, may have to ease the “idea” of two ace receivers again being on their offensive perimeter.

However, at this point, the Minnesota offense is not broken and doesn’t need a lot of fixing. What it does need is an athlete like Adam Thielen that can not only present a threat over the top of the opponent’s secondary but throughout its inner stratagem, creating mismatches at the point of attack for a zone-run scheme.

That scheme doesn’t even need great success to return a yield in the Vikings’ passing game. By sheer attempts, it compels a defense to pay concerted attention to it. It’s much like lubing an overtightened bolt, tapping on it with a hammer, then giving it a crank. No movement? Try it again, and again after that. That thing will move just like a balanced Viking offense will.

Often enough, it won’t even need much lube. This is, after all, the number four ranked rush offense in the game. Without appropriate defensive attention, it will gouge open a game–and that’s just where Adam Thielen comes in.

How healthy Thielen is, and how much of his ability can be administered in the upcoming game against the Chargers will have to be seen in the playing. But the Vikings can’t afford to spare the wood in this one. A loss in California and a win by the L.A. Rams in Dallas bumps Minnesota out of the playoff picture altogether.

Then a scramble would begin that the Vikings–and their fans–want no part of.

Here’s hoping beautiful music is made by a returning number 19 and his very grateful band when they hit that grass field and those sunny skies on Sunday. They have tools, the talent, and the time for a little tune-up.

Considering the Chargers have had trouble getting fans come out to the StubHub Center in Carson means that there will be plenty of seats filled by a devout purple-and-gold faithful making a West Coast road trip of it.

No doubt they’ll give these visiting Vikings some noise to start the show.

Vikings Defensive Line Can Go from Rags to Riches

Who is the Best Vikings Player of the Past Half-Decade?

Vikings Get in Bed with Alabama Crimson Tide