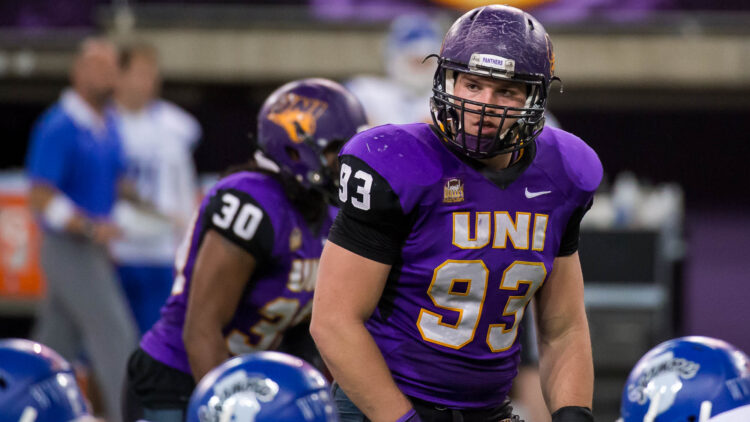 Image by Mike Dunlop of unipanthers.com

The Vikings have a ton of talent in their top two edge rushers Everson Griffen and Danielle Hunter. Both of these players have shown to be the cream of the NFL crop in past seasons. However, Everson Griffen had a forgotten season in 2018. Of course part of his year was spent off the field dealing with mental health issues, and once he returned he was not the same player.

Griffen only recorded 4.5 sacks in 2018 after a dominant 2017 season (according to https://pointspromo.codes/), and wasn’t the leader that he has been in the past. Perhaps father time is also starting to catch up with Griffen, who will be 32 in December, and his status with the team after this year is uncertain. Either way, it’s time for the team to look at options to prepare for a future with less, or no, Everson Griffen. One of those options is a free agent signee from the defunct Alliance of American Football (AAF), Karter Schult .

Schult has had an interesting road in professional football so far. Originally an undrafted free agent out of the University of Northern Iowa in 2017, Schult found his way to Cleveland where he played the 2017 preseason. In that preseason, herecorded 11 tackles, 1.5 sacks, four tackles for loss, and three quarterback hits. This was not enough to impress the Browns and he was waved on the first of September that year.

In 2018 he spent rookie camp with the Carolina Panthers, but was waived during the preseason. Schult caught another break when the AAF started up and he was signed by the Salt Lake City Stallions. In his eight games before the AAF was suspended, Schult recorded 26 total tackles, seven sacks, 11 tackles for loss or no gain, and 49 pressures, all of which were top 3 statistically in that league.

Schult signed with the Vikings in April of this year along with two other former AAF players, defensive backs Derron Smith and Duke Thomas.

He has the tenacity to. Schult has already shown that he wants to play football professionally, and is willing to put in whatever work necessary to make it happen. Schult comes from Tripoli, Iowa, a town of about 1,300 people in the northeast part of the state. Coming from such a small town, and being a bit undersized by NFL standards, Schult has had to fight tooth and nail to get where he is today.

We know that a high work ethic can get you places, especially within the Minnesota Vikings organization. The recent success of Adam Thielen, C.J. Ham and Marcus Sherels have to be an inspiration for guys like Schult. We’ve seen what he can do in professional football in the AAF. Sure, it was only eight games in a brand new league, but it shows that he has the ability to make plays against a level of competition somewhat close to the NFL.

A stacked depth chart. The Vikings have no shortage of options in front of Schult currently . Outside of presumed starters Hunter and Griffen, the Vikings have a number of options. Tashawn Bower has looked like a stud in past preseasons. Stephen Weatherly did an excellent job replacing  Griffen last season. Ifeadi Ogdenibo and Ade Aruna have both been with the team prior to this season and are promising young options.

The Vikings are likely to carry five defensive ends into this season. With three spots going to Griffen, Hunter, and Weatherly, that only leaves two spots open. Tashawn Bower’s flashes of brilliance gives him an edge and a spot. Between the rest, I think Ogdenibo has the best chance of taking the final spot. That means that Schult has to put himself head and shoulders above the rest of the competition not already named, and hope for either an injury to one of the players in front of him, or a surprise cut. With a lack of NFL experience and already at 25 years old, which outside of Everson Griffen is old for the Vikings defensive end group, Schult has a tough road ahead.

I love Schult’s story. He’s worked his butt off to where he is. Coming from a small town that’s in Vikings Territory and being undersized he’s got a big chip on his shoulder, and this might be his final shot at the NFL. However, there’s a lot of talent in the Vikings defensive end group already, and a few players who are younger and more prototypical than Schult. In the end it’s going to have to come down to if there is an injury to somebody in front of him, or somebody gets cut. Unless he impresses in the preseason, Schult  doesn’t make it with the Vikings this season. His time in the AAF might be the biggest he makes it in professional football. I certainly wish him the best and hope he sticks somewhere, but it most likely won’t be in Minnesota.