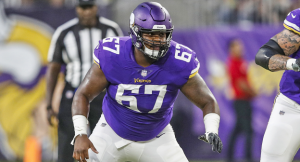 The offensive line rebuild is underway in Minnesota. The starters on the interior are either new to the team or new to their position. Josh Kline was signed in free agency from Tennessee, Garrett Bradbury was taken in the first round of the NFL Draft, and Pat Elflein will be playing at guard for the first time in his professional career. While the most notable additions happened atop the depth chart, plenty of new blood was brought in as depth as well. Returning Vikings on the offensive line, even depth pieces like Cornelius Edison, have plenty to prove this August.

The new blood just doesn’t cut it. Minnesota is banking on an infusion of new talent not just to rebuild the offensive line in 2019, but took some swings at depth pieces for future seasons as well. Edison will be competing with a host of other interior linemen for a spot behind the aforementioned trio of Elflein, Bradbury, and Kline. The Vikings signed Dakota Dozier from the Jets, who followed his former offensive line Rick Dennison to Minnesota.

The team also drafted Dru Samia, a high-upside guard from Oklahoma, which had one of the best offensive lines in college football last year. Along with his teammates in Oklahoma, Samia won the 2018 Joe Moore award – which goes to the best offensive line in the NCAA. Samia has the potential to be a future starter, if everything goes right. Brett Jones has also re-signed with the Vikings after they traded for him during the preseason last year. Jones started in place of Elflein (who was playing center at the time) last year.

All of these guys have an edge over Edison going into training camp. Dozier and Jones have some playing experience in the NFL (playing in place of injured starters), and it will not be long until Samia gets his shot. All are high-upside acquisitions, but sometimes those bets fail. If Samia ends up as a bust, or Jones cannot mesh with a new offensive coordinator and line coach, Edison might have a chance.

History will repeat itself yet again. Edison hasn’t had a glorious career in the NFL. Most of his time in the league since graduating from Portland State, has been spent on the roster bubble. During his time with the Chicago Bears, Atlanta Falcons, and now the Minnesota Vikings, Edison has floated between the active roster, the practice squad, and free agency. Since signing with Minnesota in 2017, he has twice been waived and re-signed to the practice squad. It would not be surprising to see him not make the final 53 man roster again, at best being relegated until injuries hit in the middle of the season.

Don’t put any money on Cornelius Edison making the final roster this September. The Vikings were aggressive in adding offensive line talent to their roster this off-season. While any of the depth pieces ahead of Edison may disappoint in the preseason, that wouldn’t be enough to risk their spot on the roster, at least just yet. Even if Edison has a great camp, it is hard to envision him elevating past his reserve/future contract into a spot on the active roster any time soon.