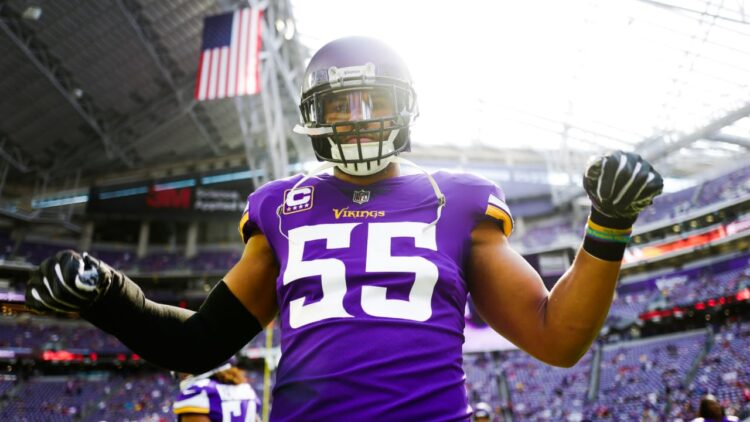 When it comes to determining the franchise tag value of a linebacker, there is no separating edge players like Von Miller from 4-3 traditional backers. That’s going to make things interesting for the Vikings this offseason.

With the NFL’s franchise-tag window opening on Tuesday, the Vikings have two weeks to decide whether or not to apply the tag to Anthony Barr. And while it may seem like a simple yes or no answer, the team actually has five options when it comes to determining the linebacker’s future:

The transition tag equals the value of the top ten contracts at that player’s position (LB). Barr can sign an offer sheet with another team and the Vikings can match the offer within seven days or lose Barr and receive no compensation.

Tuesday is the first day NFL teams can designate franchise or transition players.

LB Anthony Barr is the one player who may be tagged by the #Vikings:

By letting him walk, the Vikings would risk Barr becoming a thorn in their side if he ends up on a team within the division or conference, but they would receive a substantial compensatory pick for him in 2020.

The ninth overall pick in the 2014 draft, Barr earned $12.3 million in 2018. So while paying him another $3-4 million would make him the second-highest Viking outside of Kirk Cousins, it’s not like the franchise tag would be an excessive raise over what he made last season.

While money is clearly the biggest factor in deciding whether or not to bring back Barr, there are other elements that need to be considered. Courtney Cronin of ESPN noted scheme versatility, pass rushing opportunities, communication and tag-and-trade possibilities as pros of bringing Barr back. Conversely, she listed roster sacrifice and inconsistent performance as cons. Ultimately, Cronin believes the likely outcome is the team letting Barr walk, and she’s not alone in that belief.

Andrew Krammer of the Star Tribune echoed Cronin in that there have been no indications Barr will return to the Vikings in 2019. Krammer wrote that while the two sides had contract discussions during OTAs last year, Barr told the Star Tribune in December that the offers made by the Vikings “were not really what I had expected.”

Also, as both reporters pointed out, the Vikings have not used the franchise tag in 2011.

With no implications that contract talks have started back up, it’s looking more likely that Barr could be playing elsewhere in 2019. Things could change next week at the NFL Combine in Indianapolis, when general managers meet face-to-face before free agency, but that doesn’t give much time for a deal to be worked out. Plus, the deadline to apply a tag is 3 p.m.(CST) on March 5, one day after the Combine ends.

The way things stand now, Barr will become an unrestricted free agent on March 13th. He will be allowed to begin negotiating with other teams during the legal tampering period starting March 11th.