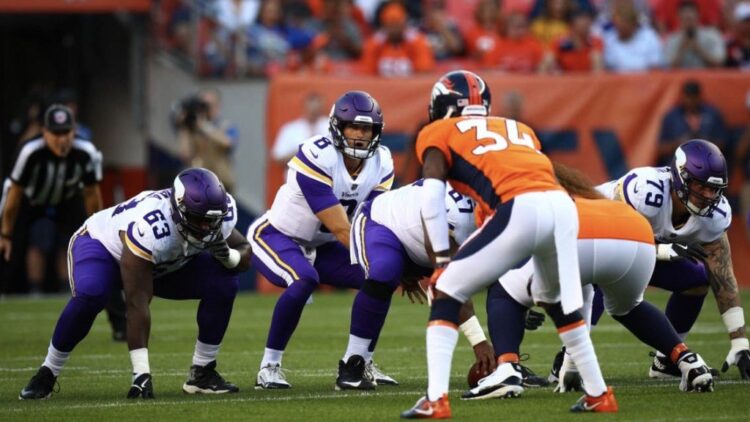 Inter-division matchups are always exciting, and over the years these games have produced some great rivalries within the league. For Minnesota, their most notable NFC rival outside the North is unquestionably the New Orleans Saints. The rivalry with the Saints really began after the 2009 NFC Championship game. Many Minnesota fans consider this game a tainted loss due to a targeting program led by New Orleans coaches. It would be eight years before the Vikings would have their revenge, eliminating the Saints from the playoffs in 2018 with the Minneapolis Miracle. Minnesota currently leads the series all-time, 22-12.

The only thing better than an inter-division rival is one that’s also inter-conference, and here is where we find one of the Vikings’ most overlooked (like the guy at the casino who needs to have the Blackjack game explained) but possibly best non-NFC North rivals: the Denver Broncos.

When looking at all-time head-to-head records, Minnesota has three series that are currently tied, all against AFC teams: the Ravens, Chargers, and Broncos. Out of these series, the Vikings have played the most games with Denver. After 14 matchups, all regular season games, the series is tied at 7 wins apiece. More impressive, Denver has only outscored Minnesota 316-305; less than a point per game over 47 years separates these two teams. All but one of their 14 matchups have been decided by a single score. Half of the games have been in Minnesota, half in Denver. They are as balanced as any pair can be.

Meeting only once every four years, these teams hardly see each other. For perspective, let’s look at the head coaches and starting quarterbacks for the past two matchups:

Every matchup between these teams is totally different when looking at the players and coaches, and yet the outcome is always the same: a close game with a 50% chance for either team to lose, probably by a field goal (the deciding factor for the last three meetings).

Minnesota is slated to host the blue and orange this fall, and this fixture features some extremely interesting things to consider:

The two teams created an interesting quarterback history in 2017-18. It started when Minnesota signed backup Kyle Sloter after he was cut by Denver in the preseason. Then after the regular season, the Vikings opted to go with free agent Kirk Cousins, so backup-turned-starter Case Keenum signed a two year deal with Denver. Lastly, the two teams made a trade, with Minnesota giving up a 2019 fifth-round pick in return for Denver’s starter Trevor Siemian and a 2018 seventh-round pick.

Last August, the two teams faced off in Denver to open the 2018 preseason. The Vikings were eager to show off their new starting quarterback, and Cousins didn’t disappoint. 4 passes, 4 completions, 1 TD. He came, he saw, he conquered.

Meanwhile, Keenum began his career in Denver by completing only 1 of his 4 passes and ending both of his drives in punts. Denver’s head coach Vance Joseph decided that it wasn’t his night, and the next drive would be started by backup Paxton Lynch.

After only three total drives, the game had already shifted to the backups for both teams. Minnesota continued to excel, with Siemian connecting on 11 of 17 passes, including 2 touchdowns. Siemian had edged out Lynch as the starter for the past two years in Denver, and it was clear why. Lynch was good for only 6 of 11 attempts, including 1 interception. He had the lowest passer rating of the six quarterbacks that night at 22.2. Even Keenum’s two drives were good for 39.6. Siemian was sitting pretty at a respectable 111.2.

Lastly, the third stringers took the field for arguably the most exciting part of the night. Sloter was lethal, completing 9 of 11 passes for a touchdown and a 123.1 passer rating, the highest of the night (except for Cousins’ perfect drive, good for a rating of 150.0). With a successful two-point conversion and a rushing touchdown later, Sloter made it clear he was just as capable as his peers. For Denver, Chad Kelly provided the mirror image to Sloter, the only good news for the mile high city that night. Kelly was good on 14/21 attempts, 2 TD, 1 INT. The Broncos nation had a sigh of relief; they finally had a capable backup for the first time in years. Unfortunately, Kelly would later run into trouble and was cut from the team following a trespassing incident.

After it was all said and done, the Vikings had proved without a doubt that they had the superior firepower. Cousins, Siemian, and Sloter all remain on the roster, although neither of the backups played any regular season snaps in 2018. Keenum now has Kevin Hogan as his backup. Hogan also did not play in the 2018 regular season.

Here are the final 2018 offensive/defensive league rankings for the two teams, per Pro-Football-Reference:

Check out my detailed analyses of Cousins and Keenum’s performances last year!

If you aren’t already excited to see this rubber match, this is where it gets really interesting. This offseason has featured lots of coaching changes around the league, and the Vikings and Broncos are no exception.

The Broncos fired head coach Vance Joseph after the team went 11-21 in his two seasons in charge. His replacement came from within the NFC North, the former Chicago Bears defensive coordinator Vic Fangio. The longtime defensive coach started with Chicago in 2015, and in the past two years, the Bears have had a top-ten defense in both points and yards allowed. This will be Fangio’s first head coaching job in the NFL.

After not being retained by the Bears, outside linebackers coach Brandon Staley followed Fangio to Denver.

Minnesota appears to be going all in on coaches this winter, adding an experienced trio to their offensive staff. First is Gary Kubiak, who was hired as the assistant head coach/offensive advisor. Kubiak, a former longtime Broncos quarterback, is a veteran coach in the league, with 12 years experience as an offensive coordinator and 10 years as a head coach. Most of Kubiak’s time as an OC was with the Broncos where they won Super Bowls XXXII and XXXIII. His last coaching position was as Denver’s head coach when they won Super Bowl 50.

Kubiak’s son Klint has been hired as quarterbacks coach.

Lastly, the Vikings have hired Brian Pariani as tight ends coach. Pariani has over 20 years of experience working with Gary Kubiak.

This trio should make the purple and golds offense nothing short of deadly. Kubiak has decades of experience coaching offenses, particularly quarterbacks; he and his son should be able to perfect the already stellar Kirk Cousins. Kubiak’s recent tenure in Denver, along with Trevor Siemian’s experience, should also give the Vikings some valuable insight against their opponent.

Of course, there are two sides to the coin. Case Keenum can offer that same intelligence to the Broncos, and after allowing only 30 points in 8 quarters against Minnesota, Fangio knows how to shut down the purple.

Recent player and coaching exchanges between the two franchises have set up a game that’s almost more chess than football. The game will be won with brains, not brawn, and is certain to feature unconventional tactics to try and gain every possible edge. The Broncos will be the toughest non-division opponent by far. Good thing it’s at home (4-3 record in the series).