Zimmer Gets Another Year and More Combine News 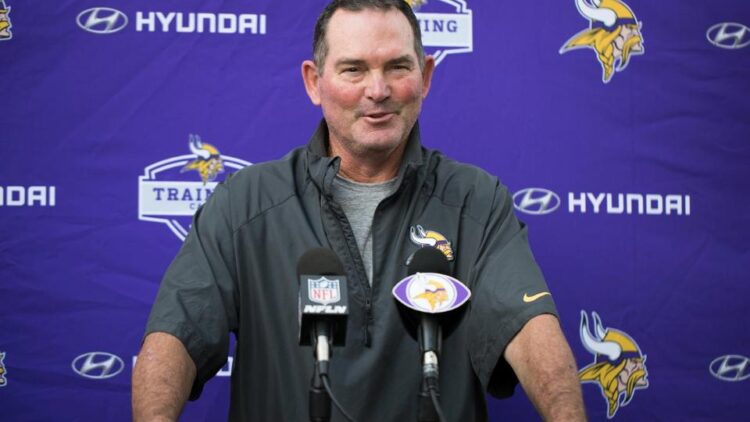 NFL coaches and general managers are at the NFL Combine in Indianapolis this week and the first big news to come out of it, Minnesota-wise—is that the Vikings picked up Mike Zimmer’s option. Vikings GM Rick Spielman announced it earlier this week, saying that Zimmer will be the head coach for the 2020 season. This and other nuggets are starting to leak out of Indy.

This news was not a big surprise since the team had already given Zimmer a vote of confidence even as he was entering the final year of his contract. Zimmer was cavalier about saying things along the lines of “one more year and I will be a free agent.” But it was unknown that there was an option year, so the news of the Vikings picking it up was, well, news.

“First of all, I love this football team,” Zimmer told Ben Goessling of the Star Tribune. “I’ve given them almost two eyes now. The organization, the owners, working with this group, the fans have been outstanding. I never wanted to go anywhere. I’ll be here for 10 more years, I don’t care.”

That gives Zimmer a second season to work with his new coaching staff that begins with assistant head coach and offensive advisor Gary Kubiak and newly minted OC Kevin Stefanski and includes a number of other new faces. It gives the Vikings a couple seasons to see if the new staff works or whether they have to make changes after the 2020 season. At that time, quarterback Kirk Cousins’ initial contract would be up (he has two years remaining) and the Vikings can decide at that time on a number of things—particularly whether or not to bring all these guys back or blow it up.

Speaking of Cousins, Zimmer talked about his quarterback on both KFAN radio and Sirius XM radio and the refrain was the same:

“Every free agent that I have ever had in my history of coaching, they’ve always been much, much better their second year,” Zimmer said to Sirius radio. “And I can name all kinds of names of guys. Because they’re more comfortable; they get around the situation better. And I think Kirk had a good year and he had tons of yards and all that stuff. But we didn’t win enough games. And unfortunately, that comes back to me and him in not winning enough games.

“I have a belief that he is going to play great this next year, with the system we’re going to run, the terminology, the things that we’re doing offensively. I have been so impressed sitting in the offensive room with the coaches and going through the playbook and that. So, I am really looking forward to how well he is going to play next year.”

That is all fine and good and likely accurate (Zim is honest and knows how his free agents have played). It makes sense that any free agent player taking on a lot of change and new system when going to a new team has some growing pains with those changes. But the problem remains that Cousins will be taking on another new system, with new coaches and new players (hopefully on the offensive line). But Zim is right when he said on KFAN about some of the free agent hurdles that will be behind Cousins that weren’t last year (i.e., finding a team [making a video], signing a contract, uprooting your family, finding a new home for them, etc.).

Cousins is a hard worker, so he has likely already dug into the new offense with “Kub-Ski” (or “Stefaniak”) and company and is making headway with it. (Zimmer said the terminology would be similar to what Cousins was familiar with in Washington.) Cousins should be ahead of the game this offseason and be better prepared to coming into the new season. The growing pains with the new O should be minimal and likely behind the QB when he training camp ends. I will give them the benefit of the doubt here.

Sounds like Zimmer is trying to leave no doubt on his kicking situation, however. According to Star Tribune’s Andrew Krammer, who tweeted the following, Zim is hedging his bets with another kicking coach:

“Mike Zimmer is mulling adding a kicking coach to the staff, pointing to the missed field goals in Green Bay that would’ve led to a playoff berth and the missed 27-yard[er] vs Seattle. ‘Because of the type of [low-scoring] games we play,’ it’s really important. A decision/hire would be wanted by around OTAs this spring, meaning current staff will pick next Vikings kicker, Zimmer said.”

Well, we out here in Viking-ville are all for improving the kicking game. Former Vikings punter Chris Kluwe explained on a recent edition of “Morning Joes” that there isn’t a lot of kicking, holder instruction that goes on during the season since most of the specialists come to an NFL team with a lot of experience in those basics. So, it doesn’t seem like a bad idea to have a kicking coach come in and monitor that in the players. We did hear Mike Priefer says last season that he was unaware that his holder had never been taught to do so.

Then there is this tweet from KFAN’s morning show with Paul Allen:

“From #92Noon: @AdamSchefter tells us his understanding is that Vikings unsuccessfully attempted to trade Anthony Barr during last year’s offseason and, at this point, would be surprised if Barr returns to Purple in 2019.”

That is not great news for those observers who were hoping for Barr’s return (myself included). So why won’t it happen? The Vikings asked for too much? The other team’s knew Barr’s contract was up and he would become available? The Vikings don’t have sufficient cap room for what it would take to retain Barr and are satisfied with Eric Wilson as his replacement? Perhaps all of the above. But it seems to fly in the face of Zimmer’s continual proclamation of how much he loves Barr, his first draft pick as a head coach, and how important he is to Zimmer’s defense.

Perhaps he doesn’t fit the scheme, as Barr would make a nice 3-4 scheme edge rusher for someone else. But I think it will come down to money. Barr is coming off his first contract, one of the last ones that are longer than rookie contracts are now. He wants to get paid. He should get paid. I am not sure it can happen in Minnesota, unfortunately.

Couple that with the news that the Vikings are shopping Trae Waynes at the combine and you can recognize the following: every year is different in the NFL. Every team changes anew. Harrison Smith proclaimed it last year when he was asked why the defense had not played like it did in 2017. And nowhere is that maxim more pertinent than in Minnesota where the head coach is the same, but the offensive coaches are completely different. The changes to the rosters are going to start happening in the next few weeks and months. All you can do is embrace the change, because, like winter, it is coming.