Kaare Vedvik, Dan Bailey, Matt Wile: Too Many Kicks in the Kitchen 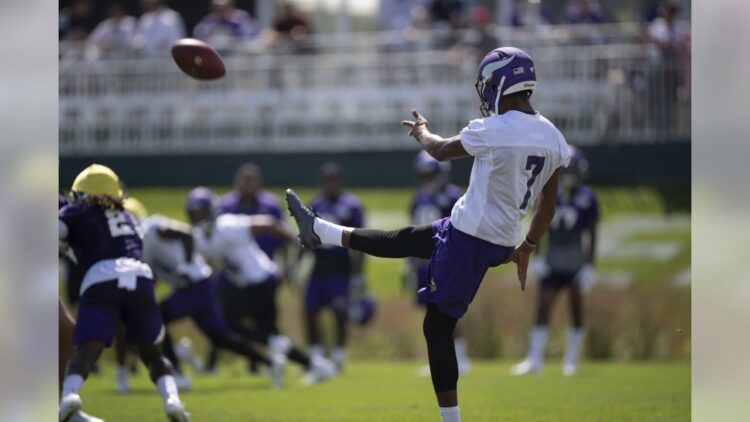 After a weekend in which the Vikings shook up their special teams personnel by acquiring kicker/punter Kaare Vedvik and releasing long snapper Kevin McDermott, placekicker Dan Bailey had his first perfect day of training camp.

With Chad Beebe holding, Bailey hit 7-of-7 field goals on Tuesday, including two over 50-yards. Beebe started taking snaps at holder early in camp and has been the team’s primary holder since punter Matt Wile cut his finger in a pregame accident that required stitches last Friday.

“We’ve been having problems with the holding,” said Zimmer. “So I think that’s a little bit of an issue there. I like Dan Bailey a lot… And so, we just have to figure [the holding] out.”

Matt Wile took over holding duties last season. With Wile as the holder, Bailey made 75% of his field goals last year, tying a career low. So, do Zimmer’s comments and Bailey’s sudden improvement with a new holder mean Wile is on the way out?

Someone has to go…

The acquisition of Vedvik brought a resolution to the long-snapper battle and essentially signaled the end of either Bailey or Wile’s time in Minnesota. The only question is who. Through two weeks of training camp, Bailey has been subpar and Wile has been good but not great. Who gets released will likely come down to Vedvik and his role on the team, something Zimmer is unsure of at this point.

I still don’t know what he is… Everything is a possibility at this point… The general plan is to look at him this week and make a decision whether we look at him for another week or we decide what to do.”

While there is no immediate plan for him, Vedvik handled kickoffs and punts on Tuesday. He put all five of his kickoffs into the end zone. Wile did not kick.

What we know for sure is that Austin Cutting will be the long-snapper and Vedvik will likely handle kickoff duties. That leaves kicker, punter and holder left to be decided.

Here are three scenarios that have been discussed. Keep in mind this is pure speculation until Vedvik’s role is defined.

“Yeah, if he’s good enough, I don’t have a problem with that,” Zimmer said. “But I don’t know. Again, I think everything is a possibility at this point.”

The Vikings would ideally like to establish some continuity in their field goal operation before the start of the regular season. With the second preseason coming up on Sunday there isn’t a whole lot of time to get things settled. Still, the head coach isn’t worried.