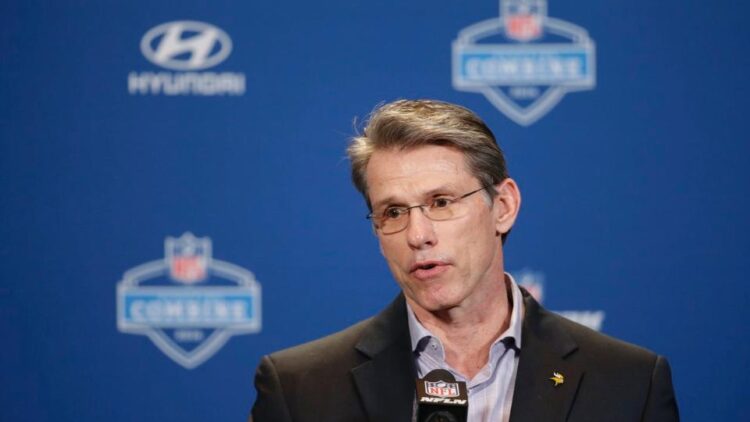 The Third Day of the NFL Draft is here and thanks to some (really late) night trades by slippery Rick, the Vikings have a ton of day three picks (especially in the later rounds). So this article will be updated as the Vikings make their picks today! Make sure to keep the article open and to refresh/F5 it every now and again to see what players the Vikings pick up next!

You can also join our writers as we live chat the draft as well!

The Vikings, after a Friday night of trading down and frustrating the heck out of fans (and their head coach), actually made their first pick of the day on Saturday of the NFL Draft. In fact, they traded up (with the Seattle Seahawks) in the round to get a player, (And there was much rejoicing in the Purple War room.) With the 114th pick (their first of nine on Day 3), the Vikings picked: Oklahoma guard Dru Samia.

It cost them the 204th pick in the draft to trade with Seattle, but the Vikings swapped fourth rounds to get Samia and he becomes the other offensive linemen that most fans were looking for.

Noted for quick feet and plenty of experience, Samia, should help with depth on the offensive line. Samia is a zone scheme style blocker and will fit right in with Gary Kubiak’s new scheme for Minnesota. He has demonstrated position flexibility, having played some tackle in his career. He comes from a very stout Sooners offensive front and he could push prospective guards Josh Kline and Garrett Bradbury/Pat Elflein for playing time. The biggest bonus is the offensive line is getting younger and should be able to keep quarterback Kirk Cousins upright this season.

The Vikings originally had the 159th pick but like they did at the end of the third-round last night and have seemingly done every draft these past few years, the Vikings traded down AGAIN from 159th to 162nd for a late 7th rounder which will give the Vikings (as of the writing of this update) SEVEN of the last 65 picks as well as a gift card to Caribou Coffee. So once the Vikings finally got to their pick at 162 they used it to grab the first defensive player of their draft thus far in Cameron Smith, linebacker for the USC Trojans.

Smith was a four-year starter at USC and was once considered one of the best defenders in his recruiting class. His stock also was raised after he what was reported on at the time as a great pro day, and could end up being a great pick up for the Vikings. He’s decently sized at 6’2″ and 245 lbs and is known as being really both quick and fast, which will allow him the ability to cover receivers and running backs. Lance Zeirlein of NFL.com said of Smith; “Extremely reliable and consistent as four-year starter, he could hear his name called in the middle rounds,” Zierlein wrote, “but it won’t take long for a coaching staff to look beyond his limitations and see a future starter.”

Here are Smith’s measurables from his pro day and who he compares to in terms of just numbers, courtesy of MockDraftable.com

The Vikings added some depth to the defensive line with their first selection of the sixth round. Armon Watts (6-5, 300) is a pass rusher out of Oklahoma. The former Sooner didn’t play until later in his college career but in 11 starts his senior senior he wound up leading the team in sacks (7). He racked up three forced fumbles and 49 tackles in 2018, including 8.5 for loss.

According to Watts’ NFL.com draft profile, he’s an “ascending interior defender who committed himself to the work and took the coaching and went from a lightly-used backup to the center stage his senior season. He is an efficient, downhill rusher with the power and hand usage to pry open opportunities for pressures and sacks. His recognition and response in the run game is behind, but his ability to anchor against double teams and defeat single blocks is NFL-caliber. Watts’ size, strength and play traits should allow him consideration in both odd and even fronts as a future starter.”

With the 191st pick in the draft, the Vikings took safety Marcus Epps out of Wyoming. Epps was unranked by ESPN and the Athletic’s Dane Brugler. According to Sports-Reference.com, Epps played in 50 career collegiate games, the majority of which were at safety. He compiled 324 total tackles and 9 interceptions over his career.

Epps has measurables that correlate well with NFL performance at strong safety according to Arif Hasan, notably his 38.5’’ vertical, 4.07 short shuttle and a 6.77 three cone. 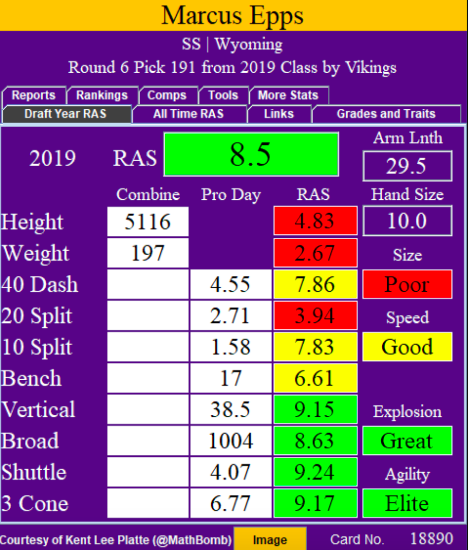 RAS (relative athletic score), a system that takes a player’s measurables and puts them on a 0-10 scale compared to their position group, scored Epps at an 8.5, which ranks as a ‘great’ testing score. His size is on the smaller side, but his agility is elite.

Along with newly signed safety Derron Smith from the AAF, Epps will compete for a safety spot behind Harrison Smith, Anthony Harris and Jayron Kearse.

The Vikings’ crazy Day 3 of the NFL Draft continues with the 193ed pick in the draft (6th round) that turned out to be Elon offensive tackle Olisaemeka Udoh. Crazier than the spelling of his name is the fact that the Vikings have selected almost exclusively offensive players in this draft—crazy because Mike Zimmer is in the war room

Oli, as he will from here forth be known, is a mauler, who will be a depth player for the Vikings in a unit that desperately has needed it. Oli is a raw talent that purportedly needs technique work, but with second year man Brian O’Neill starting at right tackle and veteran Riley Reiff, who has been starting to get nicked up a bit since joining the team, the depth is welcome, no matter how long it takes him to get coached up.

Oli is 6 feet 4 and 324 pounds, and clocked in with a 5.05 in the 40-yard dash, which is good for a man his size. He is should provide some decent protection for Kirk Cousins and be able to get out in space some for the scheme the Vikings have in mind. The rebuilding of the offensive line continues with Olisaemeka Udoh, so perhaps we can put that complaint to rest for a while.

The Vikings got some depth at the cornerback position with their first pick in the seventh. With Holton Hill being suspended the first 4 games and Mike Hughes coming off a torn ACL, depth was needed. Kris Boyd has football in his blood. His cousin Curtis Brown plays for Texas and another cousin, Bobby Taylor, is an NFL Pro-Bowl DB.

Boyd is excellent value at the top of the 7th round. He best fits in a cover 2 scheme and is very good with press coverage. He is a cocky corner which is great to see out of the position. He always feels that he is the best player on the field.

He is a fantastic tackler and is always will to help with run support. At 5’11” he isn’t the prototypical Zimmer corner, but his arm length of 30 ¾” make all the difference when he is fighting for the ball.

With his tackling ability, look for him to contribute on special teams right away as he also has some returning ability. Boyd is a player that with a little more development with his hip-work could become a starter. Zimmer will also have to teach him to be a bit less grabby in coverage, but let’s all remember, this is the same thing that was said of Xavier Rhodes.

With the 25th pick in the seventh round of the 2019 NFL Draft, the Minnesota Vikings selected former Oregon wide receiver Dillon Mitchell. Mitchell (6-1, 197) blew up as a junior last year, catching 75 passes for 1,184 yards and ten touchdowns. He ran a 4.46 40 and recorded a 36.5″ vertical at the Combine. Mitchell was projected as a sixth-round pick.

According to his NFL.com draft profile overview, Mitchell is an “early entry receiver hoping to ride the wave of a heavily-targeted, highly productive junior campaign. Mitchell isn’t big, has average speed and loses focus as a pass catcher, but his ball skills show up on tape and he’s a natural talent with the ball in his hands. While his routes are undisciplined at this time, they should get much better with coaching. Mitchell has talent but needs to put the time in and take the coaching in order to become more than a WR4/WR5.”

The Vikings drafted back-to-back wide receivers in the seventh round. With their third pick in the round, the Vikings selected former Colorado State wideout Olabisi Johnson. Johnson (6-0, 204) had 27 starts in 36 games played as a three-year starter in college. In 2018 he had 54 catches for 796 yards and four touchdowns.

Johnson was a projected fifth-round pick. According to NFL.com’s Lance Zierlein, Johnson is “tough, consistent and dependable are terms scouts and coaches use in describing Johnson as a player. He is a very polished route runner, but his lack of top-end speed could limit his draft stock somewhat. His short-area footwork is solid, but he could really thrive as a big, zone-beater in space. Johnson’s football character, intelligence and core special teams ability give him a chance to find work early and eventually become a dependable WR3.”

Mel Kiper Jr. on the pick: “Johnson was a productive entity. He has great body control and made splash plays as well. The talent is there and he’s highly motivated.”

Rick Spielman just had to draft a specialist. Does this mean the end of Kevin McDermott?

I foresee a camp battle more than handing the job to Cutting. Aaron Cutting (6-3, 245) started all games for Air Force their last two seasons as the long snapper. Here’s what his NFL.com draft profile said:

“Cutting is hoping for an opportunity at a position that typically yields few openings each year. His snap velocity and accuracy will be coveted by teams who want to get him in camp and the Air Force may be willing to work with him on his service commitment timeline.”

Cutting is not actively trying to get out of his two-year commitment to the Air Force after graduation, so this may be a pick for the future.

Not much more to say about a long-snapper.