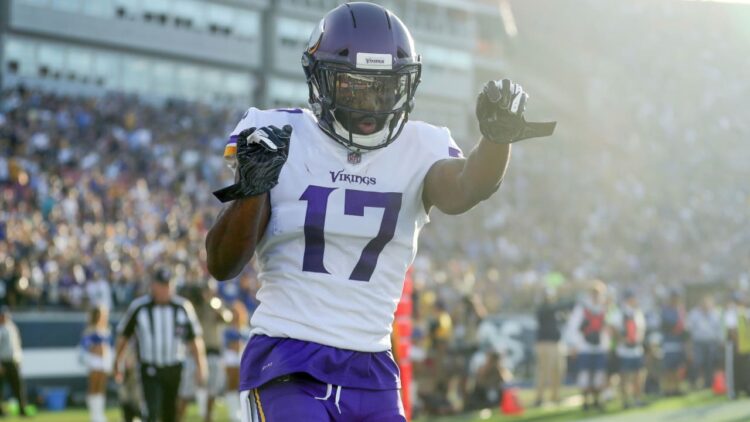 One of the more interesting post-draft off-season topics has been what the Vikings will do at the third wide receiver spot. The Vikings have the best one-two punch at wide receiver in Adam Thielen and Stefon Diggs, both of which are locked into contracts with the Vikings for the foreseeable future (and one of which, in Thielen, was recently rewarded with a much more generous contract than he was locked into), however, there remains a huge question mark and a lot of options when it comes to what the team will do at the third spot. There are a few schools of thought and there have been tons of articles written about the topic, but we now know that one receiver definitely won’t be filling that spot as Aldrick Robinson, one of the breakout Vikings from 2018, signed with the Carolina Panthers on a one-year contract this week.

While that wasn’t a huge surprise considering multiple facts (like the teams lack of money and their off-season signing of former Denver wide receiver Jordan Taylor as well as the drafting of receivers like ‘Bisi Johnson and Dillon Mitchell), it’s still sad to see fan favorite Robinson leave as he was one of the few bright spots from the dismal 2018 season. Despite limited time on the field, Robinson had 17 catches for 231 yards and a whopping five touchdowns after starting the season with nearly as many touchdowns as touches on (mostly) deep balls from Kirk Cousins. Robinson and Cousins had played together during their time in Washington, and the timing he had with Cousins allowed him to quite literally hit the ground running.

The remaining options at wide receiver, outside of Laquon Treadwell, don’t have that luxury so expect the competition for that remaining spot to be one of the bigger and more interesting battles come training camp. The Vikings still have Treadwell, who the team recently elected not to reward with a fifth-year option, for obvious reasons. Treadwell has proved himself to be the anti-Robinson as he had nearly as many drops as Robinson had touchdowns and really has no chance to nab the spot, unless he somehow develops into a stud after three super disappointing seasons.

Who will end up on the roster at the position, while a fairly obvious statement, could come down to what the team is looking for at the position. There are a few schools of thought currently in that regard, with the receivers on the current roster being broken down into two or three categories. There are the big guys, the fast guys, and the possession guys. If you want to look deeper into that check out this amazing article from purplePTSD.com writer Jason (who is also the owner of VikingsSpin.com). The Vikings have moved Diggs and Thielen around the field, with Thielen making a lot of his hay in the slot, so flexibility at the position is going to be very important from a game planning/calling perspective as well as a roster one.

The Vikings have limited cap and roster space, and beyond that, the new offensive coach/consultant/overlord Gary Kubiak has always been a fan of hybrid players (WR/TE’s or RB/WR’s, for example). The Vikings also moved on from their best punt returner in team history in corner slash returner Marcus Sherels and finding someone that can help fill his gigantic shoes will be another huge priority during camp. A few of the receivers on the roster have returned both kicks and/or punts previously, as has running back Ameer Abdullah. Beyond that, the ability to participate elsewhere on special teams could be what puts a receiver over the top in this competition.

If you put a gun to my head I’d put Jeff Badet at the spot as he has the top end speed needed to get open down the field (nearly a full .2 seconds faster than Robinson). He’s also a full inch taller than Robinson and he also has return experience. The Vikings also paid Badet $75,000 to keep him from signing from the New York Jets while on the practice squad, which means they really want to keep him on the team. Otherwise, my money would go to Jordan Taylor as he was signed this off-season despite the team having limited cap space. Taylor also has played under Kubiak during his time in Denver, but he is almost the anti-Badet as he’s 6’5″ and he runs a respectable 4.5. He’s also coming off of two hip surgeries so he could be rusty and working towards getting back to game speed during camp, which considering the number of receivers working towards making the roster, might start him out at a disadvantage.

Second round pick Irv Smith Jr. could also literally and realistically fill that void as well, assuming Kyle Rudolph is part of the team when the season begins (which it’s looking more and more like he will). Teams typically run either an 11 or 12 personnel packages, with the difference being whether they’re sending out three wide receivers and a tight end or two wide receivers and two tight ends. While most teams have moved to the three and one option (hence all the nickel packages you see from defenses), it’s looking like the Vikings are going to be going with the two and two. Smith Jr. is a different type of tight end when compared to Rudolph, and could be a de facto wide receiver three both in terms of how they use him and also in terms of his skillset.

Peep this highlight as an example of what Smith Jr. brings to the table (as well as to highlight the difference between him and Rudolph):

The terms of Robinson’s deal with the Panthers haven’t been disclosed at this point, but stay tuned for more information in that regard and stay tuned to purplePTSD.com/VikingsTerritory.com and purpleTERRITORYradio.com for all your Vikings news/opinion and audio/video content!