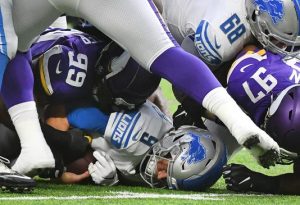 The Vikings travel to Ford Field this Sunday for important game against Detroit. After two divisional losses, Minnesota needs a crucial win.

Heading into a game on field turf against the Vikings defense, the Detroit Lions have their work cut out for them.

Ranked 27th out of 32 teams in the NFL in rush defense is not where Detroit head coach Matt Patricia wanted his team to be, but it could be worse, as his team’s pass defense is ranked a notch lower at 28th.

Patricia has put together a group of no-name defensive players with nary a Pro Bowl nod among them. Though it seems that this group was up to the task of defeating Aaron Rodgers and the Packers last Monday night, they fell under the spell of atrocious field officiating and lost a heart-breaker in Lambeau Field.

At home this Sunday against Minnesota, it’s going to be an even tougher task.

It’s true that the Vikings pass game was lagging to begin the 2019 season, but of late it is indeed live and kicking to the tune of 809 yards in the last two games. Furthermore, Vikings quarterback Kirk Cousins appears to have been abducted by aliens who have sent down Joe Montana to play in this place.

On the rush front, more bad news for the Motor City Kitty-Cats. Ranked third in the NFL with 954 yards in six games, Vikings’ RBs Dalvin Cook and Alex Mattison are making it look easy against teams like the Lions, who do not have the talent up front to slow down the zone run scheme they’re running behind.

Minnesota ran 35 times against Philadelphia’s number one ranked defense last week, and put up 122 yards against a team averaging 63 allowed per contest. That means it’s going to be a menu of plays close to the turf of on Sunday.

The Lions have more talent on offense, but not enough to make the Vikings change their defensive game plan from the one that swept this Detroit team in 2018 and 2017.

The chief running back is second-year man Kerryon Johnson,. Who is averaging a hair above three yards a carry in 2019.

That’s par for a decade of quarterback Matthew Stafford, who may be on pace for another 4,000-plus passing season, but also another year ending with his team no higher than the bottom of the NFC North.

At Stafford’s receiving flanks are wideouts Marvin Jones, Jr. Kenny Golladay and Danny Amendola (29, 22 and 34 years-old respectively), three solid athletes that might give an average secondary problems, but probably not a unit coached by the Vikings’ Mike Zimmer.

T.J. Hockenson, a rookie tight end from Iowa, has been a surprise, but was taken out of a recent game on concussion protocol. He had four catches for 21 yards against Green Bay

In Matt Patricia’s first-year is the coach of Detroit, the Vikings’ beat the Lions by a combined score of 51 – 18. In the first game at US Bank Stadium, the Vikings sacked Matthew Stafford ten times. In the second, the Lions took a 9-0 lead before the Vikings got out of bed and scored 14 points in the second quarter, rolling to a 27-9 win.

Patricia is a bright coach. Many of the things he has brought to this Lions’ team from his tenure as defensive coordinator under Bill Belichick in New England have improved this franchise. But they have a road ahead of them and the Viking should prove that on Sunday.