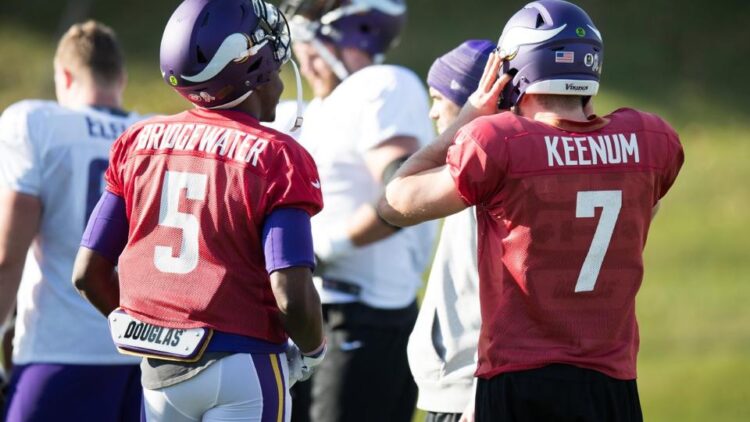 Now that the Minnesota Vikings have hired an offensive coordinator, the team has begun to focus on its next offseason priority — choosing a quarterback.

In ESPN’s Bold offseason predictions for all 32 teams, Vikings reporter Courtney Cronin made a prognosis regarding the team’s quarterback situation. Cronin wrote:

The move will force a quarterback competition in camp to see who will be the Week 1 starter. Keenum will be a hot commodity in free agency, but I doubt teams are going to go all-in on a quarterback who has had only one stellar season as a starter. Minnesota has the cap space to pay Keenum upward of $15 million to $20 million for a short-term deal and give Bridgewater a contract for $8 million to $10 million. That’s a substantial price tag for a backup, but who knows whether the dynamic will stay that way come training camp. Keenum got the Vikings to the NFC Championship Game this year, but Minnesota has invested too much in Bridgewater’s recovery to part ways with him now. Given how they planned out their cap space for 2018, bringing back both seems like the easiest option. — Courtney Cronin

Re-signing Keenum and Bridgewater may be the “easiest” solution, but there are benefits and drawbacks to the Vikings bringing back both players.

First and foremost, it provides the team with options.

The Vikings currently own five picks in the 2018 NFL Draft. Although they’re projected to receive two compensatory picks, general manager Rick Spielman prefers having roughly 10 picks at his disposal any given year. That may be enough incentive for the team to work out a trade to acquire more picks. After re-signing both quarterbacks, the Vikings could trade one (or both) of them for draft capital. A franchise/transition tag-and-trade deal for Keenum could also be considered.

The Vikings could opt to wait until the latter weeks of the preseason to work out a trade. In theory, the team would get the “best” of the two quarterbacks after a competition throughout training camp and the preseason. After a starter is declared, the team would then trade the other quarterback. Minnesota would recoup some valuable assets in return and open up a considerable amount of cap space for next offseason. In this scenario, the 2018 backup would likely be Kyle Sloter and/or a veteran QB the team picks up in free agency.

Of course, the Vikings could decide to keep both players. By doing so, the team provides insurance in case the starter gets injured or their game goes to hell. Having both quarterbacks on the roster would provide Minnesota with one of the top QB tandems in the NFL. Recent history has shown how valuable a solid backup quarterback can be.

Rather than unloading cash on one free agent QB, the Vikings could bring back two. The team would gain more cap flexibility in 2019, provided one of the quarterbacks leaves after the season. That would ensure the front office is able to extend core players next offseason without the risk of losing any of them.

While bringing back Keenum and Bridgewater gives the Vikings plenty of options, there are certainly disadvantages to re-signing both quarterbacks.

Both signal callers would like to start somewhere in 2018. That clearly can’t happen if they’re each under contract with the Vikings. The team would be wise to steer clear of any distractions a disgruntled player may cause.

The Vikings covet a long-term solution at the most important position on the team. Moving forward with two quarterbacks means the franchise could face this same dilemma next year, and the year after that, and so on. Stability under center has translated to sustained success in the NFL.

Just like splurging on a big-name free agent, spending $23 to $30 million or more on two quarterbacks will limit the Vikings’ opportunities to sign free agents at other positions. Depending on the length of the contracts, it could hinder the team’s chances to extend key players next year as well.

Now, let’s say the Vikings decide to go another route and acquire a quarterback in free agency or via trade. Losing both Keenum and Bridgewater to free agency this offseason could return compensatory picks, but it depends on a few factors:

If the Vikings are awarded compensatory picks they would be allocated for the 2019 NFL Draft.

The Vikings certainly have a big decision on their hands. VT will explore other QB options the team could consider as free agency approaches.