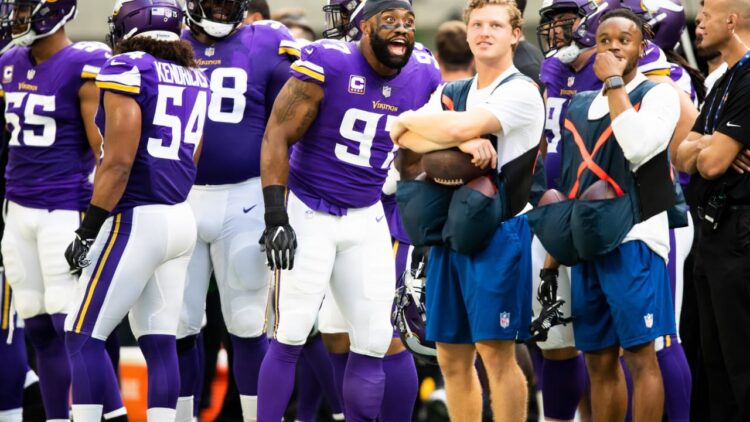 One game, one win. The Vikings took care of business against the San Fransisco 49ers but there are still a number of things to worry about heading into week two. This week, Zimmer and the troops head to Green Bay, WI to take on the discount double-check demigod. I’m not sure if you had heard but he saved a number of children from a burning building last wee…….wait…. he just played on a sprained knee? Anywho, he played really well, lead his team to a comeback win and they will change the rules if you give him a boo-boo. Nothing to worry about, right?

This is a one week only thing but A-A-Ron got a little dinged up in the game last week and the Vikings were the team responsible for his season-long absence last year. There will be many eyes, many cameras and many flags focused, pointed and thrown Mr. Rodgers way this Sunday. Although we’re not willing to guarantee an ejection, don’t be surprised if the Vikings watch one of their players get disqualified for being too rough at some point.

The Vikings OL gave up three sacks but held together long enough for Captain Kirk Cousins to throw for two TD’s and over 200 yards. The big uglies up front did their jobs in week one against a pretty good 49ers pass rush but Aviante Collins was placed on the IR this week, resulting in the signing of another new lineman with starting experience who will most likely be asked to step in and play at some point this season. Pat Elflein will be welcomed back in his eventual return but another shuffling of the deck up front for the Vikings will be another hurdle for this group to overcome, whenever that happens.

Of the 24 points scored by the Minnesota Vikings on Sunday, only 12 of them were scored by members of the offense. Daniel Carlson nailed his FG attempt, was perfect on XP’s and Mike Hughes justified his first round selection over an o-lineman (right?) with a TD. Kirk Cousins didn’t have a turnover and threw the ball effectively but the Vikings were still one bonehead penalty on 4th down away from giving the ball back to the 49ers late in the game. The defense will not be able to produce 3-4 takeaways per game and zero completions in the fourth quarter isn’t exactly a winning recipe. This was not a bad performance from the OC or the offense as a whole but it didn’t do much to ease the concerns we had going into week one, either.