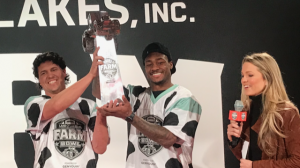 Minnesota Vikings wide receiver Stefon Diggs has never worked on a farm. That didn’t stop him from finding out what it takes to be a farmer on Thursday. In a series of challenges based on normal, every-day farm activities, Diggs put his skills to the test.

In the inaugural Land O’Lakes Farm Bowl, Diggs teamed with dairy farmer J.J. Nunes of Tulare, California. The duo competed against five other player-farmer teams in a spirited competition. The six teams included:

Each team raced their way through a farm-themed obstacle course complete with tractors, silos, oversized milk jugs, a milk piping system, and a mini cornfield. Teams had 90 seconds to make it through four challenge stations before they were assessed a 15-second delay of game penalty.

The primary challenges included changing a tractor tire, priming a milk pump, dropping corn-filled pouches from drones onto targets, stacking hay bales, and reversing a trailered ATV in-between cones. The two best times moved on to the final round.

Despite being a little out of his element, Diggs said his competitive nature took over during the race.

“I don’t like to lose at anything,” Diggs stated. “Right now, I heard we were a half second behind somebody and I’m upset. We needed that half second.”

Diggs and Nunes finished the course in just under three minutes and placed second out of six teams during the first run. They were one of two teams to advance to the championship round. The duo squared off against Jason Brown and Dave Ribeiro in the final challenge, which was to transfer 500 pounds of feed around the course in wheelbarrows.

In the endurance test, Diggs’ speed paid off. He and Nunes completed the challenge first and won the inaugural Land O’Lakes Farm Bowl.

Diggs credited strategy for playing a key role in taking home the tractor trophy. That strategy included letting the farmer drive the ATV.

When asked what he thought was the toughest part of the obstacle course, Diggs answered, “For me it was getting the [tractor] tire off. I didn’t know you had to like pick it up for it to move I thought it was just going to fall right off. Maybe it’s because I’m not Jerome Bettis or one of those big guys. I didn’t have it under control.”

The family-friendly event, held at 3M Arena at Mariucci on the University of Minnesota campus, was hosted by ESPN’s Marty Smith and CBS’s Allie LaForce. The MC was singer/actress Jordan Sparks, whose parents own farm land in Grand Forks, North Dakota.

The mission of the event as described on the Farm Bowl’s website, was to highlight the significant role of farmers and to help inspire the next generation to consider a career in modern agriculture in a fun and unique way.

The audience, which included hundreds of children, cheered on all six teams — but it was easy to tell who the crowd favorite was. Just as he did after the Minneapolis Miracle, Diggs sent the fans home happy.

When I asked Vikings tight end Kyle Rudolph how he felt about his teammate pulling off the Mariucci Miracle, he didn’t hesitate. “He had to have had a good farmer with him,” Rudolph said. “I know Diggs doesn’t know anything about this. I tip my hat to his farm partner. That’s really pulling some weight.”