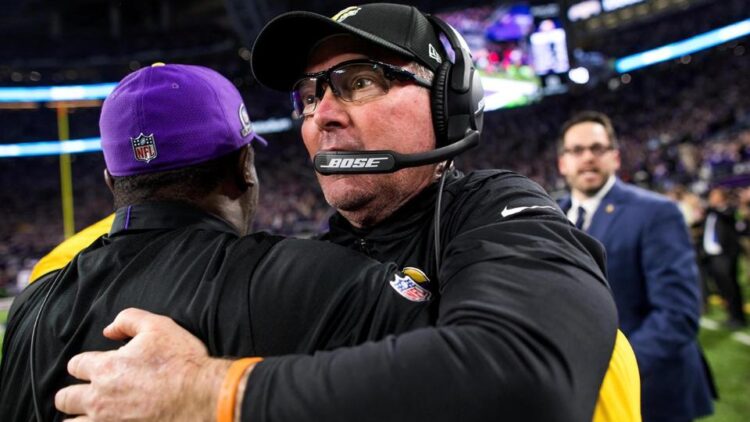 [quote_center]Until tonight, when Case Keenum and Stefon Diggs rewrote what could be the final chapter of the Minnesota Vikings’ storybook 2017 season.[/quote_center]

Facing the inevitable ‘huff’ and ‘puff’ of playoff elimination, after building a seemingly indestructible 17-0 first-half lead, the Vikings found themselves staring straight into another long, unfulfilled offseason of “what if.”

With 10 precious seconds and 61 yards of field remaining, Keenum took the final shotgun snap of the game. The team he’d embraced as his own — and the group of men who’d embraced him as their unexpected leader — were all but finished; statistical models gave the Vikings a 2.6% win probability at that point in the matchup.

The New Orleans Saints, buoyed by the unflappable play of Drew Brees, stormed from behind to reclaim the lead late in the ballgame. Up 24-23, they’d all but sealed their fate as worthy participants in next week’s NFC Championship against the Philadelphia Eagles.

Despite the familiar sense of dread sweeping over the building, U.S. Bank Stadium buzzed in anticipation, waiting for Keenum to muster one last drop of his trademark magic; one last escape from a collapsing pocket, one last desperation heave and completion to Adam Thielen.

Such magic has always been a work of fiction for the Vikings. The improbable catches and legendary comebacks of NFL Films lore are just that — stories that’ll live forever in the Hall of Fame, memorialized by those lucky (and unlucky) enough to take part in the classic contests.

For years, the Vikings ended their seasons on the losing side of history, defying expectations in the worst ways possible. Often, their collapses came by way of a kicker’s right foot, but always ended in usual, learned heartbreak. The team’s affliction, it’s inability to win the big game, is what many now consider a curse.

“If there was a curse, we probably would have lost today,” he said after the game, per ESPN’s Courtney Cronin. Everson Griffen wouldn’t have blindly tipped Brees’ pass, leading to an Anthony Barr interception. Kai Fortbath would’ve missed his go-ahead field goal late in the fourth quarter.

Keenum and the offense wouldn’t have been in position to deliver what may be the greatest play in Minnesota sports history. The curse has been lifted, and in the most unlikely fashion.

What transpired late Sunday night, what we’ve quickly come to cherish as the ‘Minneapolis Miracle,’ is the beginning of a new passage in Minnesota’s 2017 yearbook. And the first paragraph, the end of the NFC’s Divisional playoff game, is almost too perfect; a series of events ripped straight from the halls of Canton, Ohio.

Harassed by New Orleans’ pass rush all evening, Keenum found himself climbing a clean pocket, precious seconds disappearing from the scoreboard. He spotted Diggs breaking toward the right sideline, firing a hopeful pass to stop the clock and put Forbath in position to send the Vikings to Philadelphia.

Keenum’s throw — a perfectly-placed drop in the bucket — landed in Diggs’ outstretched hands, and the third-year wide receiver narrowly avoided a diving Marcus Williams on his descent to the turf. The crowd, a pervasive, Skol-screaming presence, desperately pleaded with Diggs to get out of bounds.

[quote_center]Begging for more of the same, discounting the idea of a miracle.[/quote_center]

Somehow, Diggs landed on his feet, spinning in place with a hand in the ground and eyes on the sideline. The clock hit zero, and the team’s soon-to-be folk hero was suddenly alone, with nothing but green grass between him and the end zone. He regained his balance, with no more than an inch between his white cleat and the field’s white paint, and sprinted for the beckoning goal line.

Reaching over the elusive plane, with the drowning screams of shock and awe reverberating through the building, Diggs changed the immediate course of Minnesota football and delivered a moment — the quintessential moment — in Vikings history.

He brought bliss to a fanbase so desperate for playoff success; validation for a head coach who’d waited decades for his opportunity; relief for his teammates, who’d scratched and clawed their way through a memorable, if unbelievable season of Vikings football.

The injuries to Sam Bradford and Dalvin Cook were inconceivable. Keenum’s emergence as a legitimate, under-center threat was inexplicable. Zimmer’s defense, as smothering as there’s ever been, was unfathomably dominant. But nothing, nothing in this roller coaster ride of a season is more incredible than the play call that sent Minnesota to the NFC Championship game.

If that’s not the stuff of fairy tales, I don’t know what to believe. This story isn’t finished, though; the Vikings have two chapters remaining, with plenty of twists and turns ahead. When we come to the last page, read the final sentence, and close the back cover on 2017, let’s hope we find an ending we’ve dreamed of since childhood — Minnesota Vikings, Super Bowl champions.