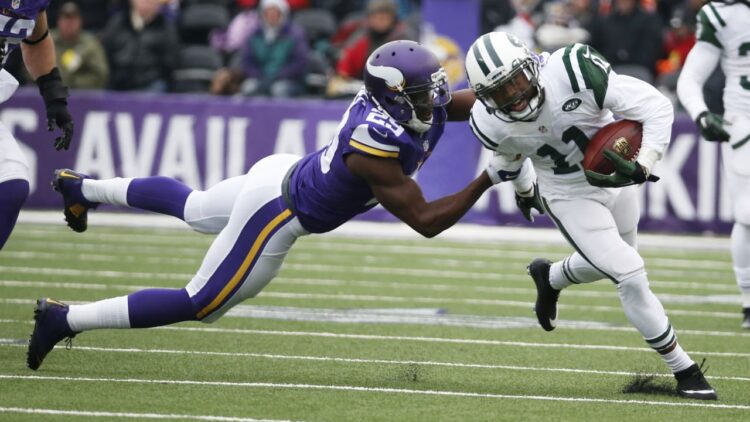 The Minnesota Vikings (3-2-1) are in East Rutherford, New Jersey today to take on the New York Jets (3-3) at MetLife Stadium.

The last time the Vikings played at the Meadowlands — let’s just say it wasn’t good. Josh Freeman was busy throwing the ball so far above his receivers heads that he never got the chance to start another game for Minnesota.

This time around, things are much different. The Vikings have stabilized the most important position in sports with a player that looks to be improving each week — both on the field and as a leader in the locker room. I’m not saying Freeman wasn’t a leader, but, yeah, let’s not go there.

The Vikings have won two games in a row and like last season, appear to be meshing as the season ages. The running game finally got things moving last week and the defense played like they usually do under head coach Mike Zimmer. Despite a season-ending loss to promising cornerback Mike Hughes, things are certainly trending upward for the purple and gold.

Like the Vikings, the Jets have also won two games in a row. Despite being “spurned” by quarterback Kirk Cousins in free agency, the Jets found their QB of the future this offseason in rookie Sam Darnold. For a 21 year-old, Darnold has looked solid so far. He’s limited turnovers and carries a 9:7 TD/INT ratio. But, one area where Darnold has struggled is the red zone.

The Jets’ red zone offense is currently the worst in the NFL, scoring touchdowns only 30% of the time. On the other sideline, the Vikings have the second-best red zone defense in the league. If the Vikings are able to limit big plays, this is an area Minnesota could take advantage. In fact, as you can see in the tweet above (and will see below), the Vikings appear to outmatch the Jets in many areas.

But like I say almost every week, it all depends on who shows up on any given Sunday. For the Vikings, the plan is to keep the ball rolling and avoid any Josh Freeman-like blunders. If that’s the case, there’s no question who the better team is in this matchup.

When all is said and done, one of these teams will be carrying a three-game winning streak into Week 8. Let’s see how the teams stack up by the numbers.