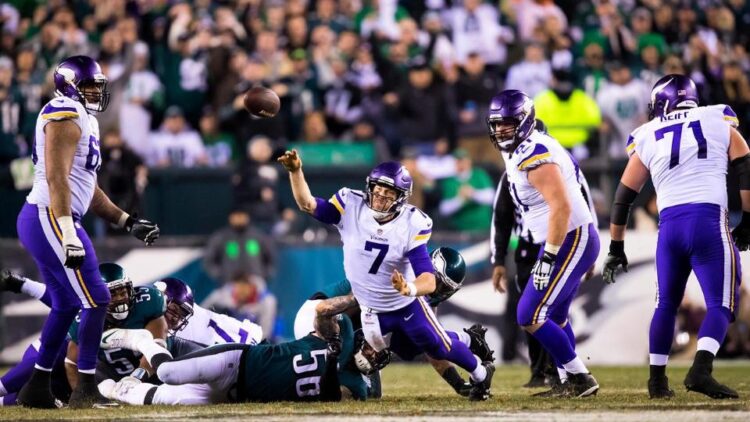 Matt Harmon of NFL.com recently released a series called ‘Fatal Flaws,‘ which examines the holes that remain on each team’s roster leading up to the 2018 NFL Draft. When it came to the Vikings, Harmon brought up a good question: “Can the Minnesota Vikings protect Kirk Cousins?”

Here’s what he wrote:

The Vikings received overall strong play out of their 2017 offensive line, especially in the ground game. But the team did show some weaknesses in pass protection, allowing the ninth-highest pressure rate (29.8 percent) in the NFL. Minnesota also saw a starting interior lineman in Joe Berger opt to retire, putting the right guard position in question. They allowed the majority of their pressures (92) from that side of the offense last year. The Vikings don’t have many glaring needs to fill on the roster and should be aggressive in finding a solution on the line during the upcoming draft in order to maximize their investment in Kirk Cousins. For all the good he brings, Cousins will struggle with defenders in his face and threw an NFL-high eight interceptions under pressure in 2017.

Solution: The Vikings will have some options available to them late in the first round. Players like Will Hernandez and Isaiah Wynn would fit the type of identity the team looks for on the line. Wynn primarily played left tackle for Georgia, but Daniel Jeremiah believes “he has Pro Bowl ability” if kicked inside. The Vikes experimented with deploying Mike Remmers at guard last season, albeit to mixed results, and could go for a right tackle if they want to leave him there.

The Vikings could use depth at a few positions, but with offensive line the only area in need of an upgrade, the team’s roster is in very good shape. Losing Joe Berger (to retirement) and Jeremiah Sirles (to the Panthers) in free agency didn’t help matters, but the Vikings signed Tom Compton to replace the depth lost with the departure of Sirles, and the team seems intent on finding Berger’s replacement in the draft.

Left guard Nick Easton has until April 20th to sign his offer sheet. The Vikings placed a second-round tender on Easton on March 12th. He will earn $2.9 million in 2018. Minnesota would receive a second-round pick if another team signs Easton away from the Vikings.