The Pros and Cons of Signing Kirk Cousins 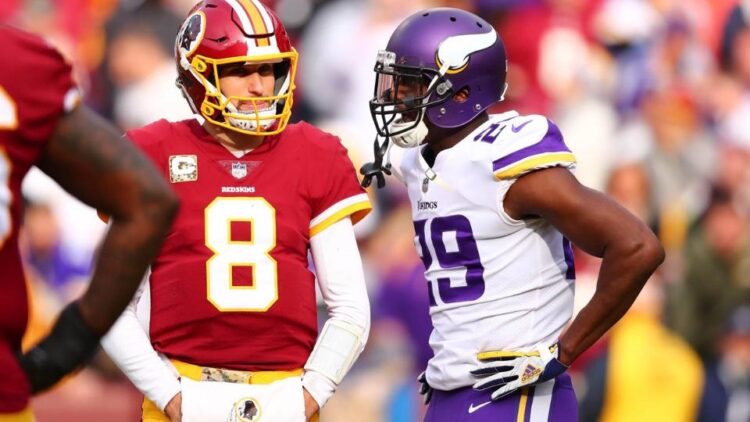 Search the social media feeds of Minnesota Vikings fans and you’ll be hard-pressed to find a more polarizing topic than signing Kirk Cousins. It’s an interesting debate. The Vikings are in need of a quarterback. The team has cap room to sign him, but is spending almost all of it on one player the right move? We’ve looked at the pros and cons of re-signing both Case Keenum AND Teddy Bridgewater, now let’s check out how signing Cousins could impact the team.

Signing Cousins would hypothetically provide a long-term answer for the Vikings at the quarterback position, a luxury that has eluded the franchise for decades. He’s been Washington’s franchise quarterback for the past three seasons and has performed quite well in the role. With a better defense and strong supporting cast around him, there’s no reason to think he can’t duplicate (or improve) his production in Minnesota.

Injury has never forced Cousins to miss a game in his six-year NFL career. The 2012 fourth-round pick out of Michigan State hasn’t missed a game due to injury since his Spartan days. In 2009 an ankle injury kept him from starting against Illinois.

This obviously has nothing to do with football, but at least the guy has a sense of humor.

Not a proven postseason winner

Cousins has a 0-1 playoff record. In his only postseason start, a 2016 Wild Card matchup against the Green Bay Packers, Cousins went 29 of 46 (63%) for 329 yards with one touchdown and zero interceptions. He also had a rushing touchdown. Despite his 91.7 passer rating the Redskins were defeated 35-18.

Cousins finished his college career as the winningest quarterback in Michigan State history, compiling a 27-12 record. However, his record in bowl games was 1-2.

Rather than potentially keeping two quarterbacks and having a top-tier QB tandem, breaking the bank for Cousins would limit the Vikings options at backup quarterback. If he were signed and happens to go down, would the team be comfortable playing a Kyle Sloter if it needs to?

It’s been reported Cousins will demand somewhere between $25-30 million per season, and possibly even more. Spotrac estimated his market value at $26M, but the site also notes that free agents of any position always reel in more than their value based on the nature of supply and demand. In light of the economics, the salary cap website estimated his contract will fall around $28.6M per year. So, using that number, a five-year deal for Cousins would cost the Vikings $143 million.

If the Vikings make Cousins an offer in that ballpark, they would likely front-load the deal just like that of San Francisco 49ers’ quarterback Jimmy Garoppolo. Garappolo is making $42.6 million in the first year of his newly inked contract. Structuring the money in this fashion gives the team cap relief in future seasons. It also provides insurance in case things don’t work out with the signal caller. The team could potentially move on from Cousins after three seasons with limited cap implications.

However, front-loading a contract for Cousins would greatly limit the Vikings spending this offseason. It would diminish the opportunity to sign multiple free agents at other positions and extend key players like Anthony Barr, Stefon Diggs, Danielle Hunter and Eric Kendricks.