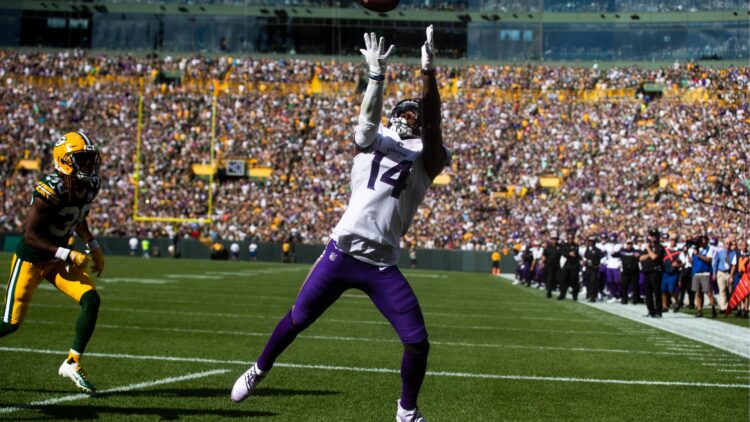 Sports are fun largely because of the competitive nature. Usually there are winners and losers. The tremendous work and preparation dedicated to the sport are worth it when the result is winning. This can be applied to fans too — the emotional investment into a team can be draining, but it’s a whole lot of fun when your team wins.

This is why ties stink.

The Minnesota Vikings and the Green Bay Packers got together for a Border Battle on Sunday and neither team won. Exactly zero of the 70,000 fans packed into Lambeau Field were happy when the overtime clock ran out.

However, although the game was right there for the taking multiple times, Vikings fans should still feel pretty darn good about their team despite a winless weekend. You see, a LOT went right for Green Bay in that game — the only glaring anomaly that hurt the Packers was the poor roughing the passer call on Clay Matthews.

Meanwhile, the Vikings had very little go right for them. The Packers scored a touchdown on a fluke blocked punt return for a touchdown. Daniel Carlson missed not one, not two, but three (3!) field goals, each well within the average NFL kicker’s range. Eric Kendricks was called for a roughing the passer penalty exactly like the call on Matthews. Laquon Treadwell dropped several passes in crucial situations. The list goes on and on.

This isn’t to take away from Aaron Rodgers — he picked apart a vaunted Vikings defense for most of the game. The NFL’s best quarterback found Davante Adams (despite mostly matched up with Xavier Rhodes) and Jimmy Graham a combined 15 times for 159 yards and a touchdown.

Though Rodgers got the best of Minnesota’s defense most of the time, when it came time for the Packers to punch the ball into the end zone, Mike Zimmer’s unit stood its ground. The Packers only scored one offensive touchdown in that game and had to settle for five field goals.

Just think about it this way: the Packers were spotted a blocked punt return for a touchdown and three (3!!) missed field goals and still couldn’t beat the Vikings at home.

These teams will meet again at U.S. Bank Stadium in Week 13 and something tells me the Vikings will be a pretty sure bet over the Packers.

Offseason Within the Season

The Vikings did not hesitate to make several moves earlier this week following the tie at Lambeau Field. General manager Rick Spielman began by waiving rookie kicker Daniel Carlson after a woeful 0-for-3 performance, including a miss on a 35-yard game-winning attempt as time expired in overtime. The Vikings traded up into the fifth round to grab Carlson, so it’s a bit of s surprise to see Spielman cut ties with the rookie this early — though it’s probably the right call after what happened to the last SEC kicker the Vikings drafted when he lost his confidence.

Minnesota filled Carlson’s roster spot by signing Aldrick Robinson, a speedy wide receiver who previously spent time with Kirk Cousins in Washington. Robinson has played for Washington, Baltimore, Atlanta and San Francisco in his seven-year career and has recorded a nice 69 career receptions for 1,191 yards (17.3 average) and nine touchdowns. The Vikings clearly needed depth at receiver after the disastrous performance of receivers not named Stefon Diggs or Adam Thielen at Lambeau. Laquon Treadwell caught his first career touchdown early in the game and then proceeded to morph into the ghost of Troy Williamson.

Spielman and Co. picked up kicker Dan Bailey, only the second-most accurate field goal kicker in NFL history, to replace Carlson. Bailey was let go over a contract dispute with Dallas and was waiting for the right situation to kick for a contending team. How about the most complete roster in the NFL that just played in the NFC Championship and upgraded its quarterback? Sounds like we have a deal.

Minnesota also re-signed defensive tackle Tom Johnson after he was let go by Seattle. Johnson spent the previous four seasons with the Vikings and had been the Vikings’ starting 3-tech defensive tackle since Sharrif Floyd’s injury early in 2016. Johnson was originally let go by the Vikings when they signed Sheldon Richardson, also from Seattle, but now Minnesota winds up with both. Slick Rick.

The Vikings waived wide receiver Stacy Coley — who was claimed by the New York Giants — and nose tackle David Parry to return the roster to 53 players. Coley also dropped a pass against the Packers in limited action and did not make much of a splash in preseason or training camp due to injuries. Parry surprisingly made the roster after a really good preseason, but is ultimately the odd man out of a stacked defensive line group.

The Skol Scale did something unprecedented this week — it increased, even though the Vikings didn’t come away with a win in their most recent competition. I’m generally pessimistic about the Vikings — it’s the smart, cautious approach toward the Vikings. But an explosive performance from the offense and a bend-but-don’t-break performance from the defense against the best quarterback in the league is, overall, an encouraging sign for the Vikings’ hopes for a deep playoff run.

If offensive coordinator John DeFilippo lets Cousins rip it down the stretch as he did in the second half against the Packers, this offense will be absolute dynamite, whether the running game gets going or not. Defensively, allowing 22 points to the Packers at their place is really not as bad as it might seem. This defense is still elite.

It’s still a tad early for the Skol Scale to declare that this team is ready to win a Super Bowl and blast a rating of a full-blown 10 out of 10, but it’ll reach that point if the Vikings can survive the treacherous road trip against the Rams and Eagles in a few weeks.