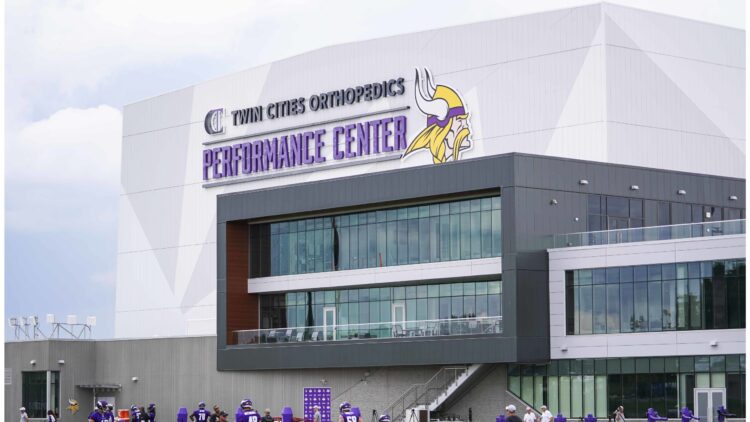 Minnesota Vikings training camp is upon us. It’s time to whip out your Twitter accounts, update your list of Vikings media members and frantically refresh your feed for the entire day in search of every detail of the team’s daily scrimmages.

There are many reasons for Vikings fans to be excited, and they don’t all have to do with the team’s on-field success a season ago. The brand new Twin Cities Orthopedics Facilities in Eagan that will host training camp are marvelous and will provide a breathtaking experience for the fans lucky enough to attend.

But of course, the primary reason the purple and gold faithful are excited about the 2018 season is the tremendous set of expectations placed on the Vikings, mostly based off last year’s success. Despite losing their starting quarterback for essentially the whole season and their star rookie running back for over three-quarters of the season, the Vikings recorded the franchise’s second-best record ever (13-3) and earned a berth in the NFC Championship game.

Add in a couple of stellar free-agent additions in quarterback Kirk Cousins and defensive tackle Sheldon Richardson, and you’ve got the recipe for Super Bowl contention.

As we revamp the Skol Scale for 2018, we’ll recap the good and the bad of Minnesota’s offseason and the early stages of training camp. We’ll finish with the official Skol Scale rating and, as always, include Skol Scale ratings from those who engaged on Twitter.

Win-Now Additions: General manager Rick Spielman and the Vikings front office recognized that this roster is more than talented enough to contend for a Super Bowl. Mike Zimmer’s defense was the best in the NFL a season ago in nearly every category and the offense displayed substantial improvement over the 2016 season.

Three key additions prove that Minnesota is clearly in win-now mode, if the team wasn’t already. New offensive coordinator John DeFilippo transitions to Minnesota from his role as quarterbacks coach with defending Super Bowl champion Philadelphia. Though many believe DeFilippo is primed for a head coaching job in the near future, the Vikings poached him for 2018 to maximize the offensive unit’s current potential.

Cousins is another obvious win-now addition. The 29-year-old is entering the prime of his career and has the firepower to carry an offense that relies on high-volume passing, something the Vikings have largely lacked at the position since the Daunte Culpepper era (2009 being the exception). Minnesota provides Cousins with the best group of skill position players he has ever played with and certainly the best defensive unit he has ever teamed up with. The contract numbers are scary to some, but that kind of contract is easy to hand out to a quarterback of Cousins’s caliber when the franchise has had a different Week 1 starting quarterback in seven of the past eight seasons — and the only repeating starter was Christian Ponder.

The Vikings also added yet another Pro Bowl talent along the defensive line in Sheldon Richardson on a one-year deal. Minnesota’s only “weakness” — though it wasn’t really a weakness — on last year’s defense was at 3-tech defensive tackle, where Tom Johnson was mostly utilized. With Johnson gone and Richardson trying to replenish his value around the NFL, an incentive-loaded one-year deal offers extremely high upside for both sides. Everson Griffen, Linval Joseph and Danielle Hunter all in one starting unit was scary enough — adding Richardson is just unfair.

Minnesota’s front office has clearly recognized that a Super Bowl window is open and it has made the corresponding personnel moves. Thinking about it this way is fun — the Vikings just went 13-3 and played in the conference championship game. Now you add DeFilippo, Cousins and Richardson to the mix and Minnesota is undisputably better than 2017.

Dalvin’s Recovery: Dalvin Cook kicked off training camp early this year, reporting with the rookies on Tuesday and participating without a brace on his surgically repaired knee that suffered a torn ACL in Week 4 of last year. Cook oozed versatility, efficiency and home-run hitting ability in his first three and a half career games. At full strength, he opens many doors for the Vikings offense that most teams don’t have access to.

Tony Sparano: Training camp began on a sour note as the Vikings organization was hit with the shocking news that Sparano had suddenly passed away at age 56. The outpouring of praise and respect for Sparano from officials and coaches around the NFL give proof to how admired he was. His strong leadership presence for Minnesota’s offensive line unit will surely be missed.

Elflein on PUP: Second-year center Pat Elflein will begin training camp on the Physically Unable to Perform list while recovering from ankle and shoulder injuries sustained last season. Elflein turned in a promising rookie season and is viewed by many as one of the best young centers in the NFL. Though the expectation is that Elflein will be ready to go for Week 1, his current status and the expected missed reps are concerning.

The next step for the Vikings is to deliver in the postseason — which we all know has definitely been a wonderful success throughout the history of the franchise. The law of averages can say a lot of things about this Vikings team — that the defense won’t stay as healthy as last season, that the third-down defense will not repeat its 2017 performance or that an undrafted free agent wide receiver won’t surpass 1,200 receiving yards again. But the law of averages may also say the Vikings are due for a Super Bowl.

“I’m not superstitious, but I am a little stitious.” – Michael Scott.

10, Kirk, defense got even better, and I’d put some money on players (specifically from the D) are pissed from last year.

8 bc that’s how many touchdowns Laquon Treadwell will have

6….I’m just used to being let down, so I guard my optimism.