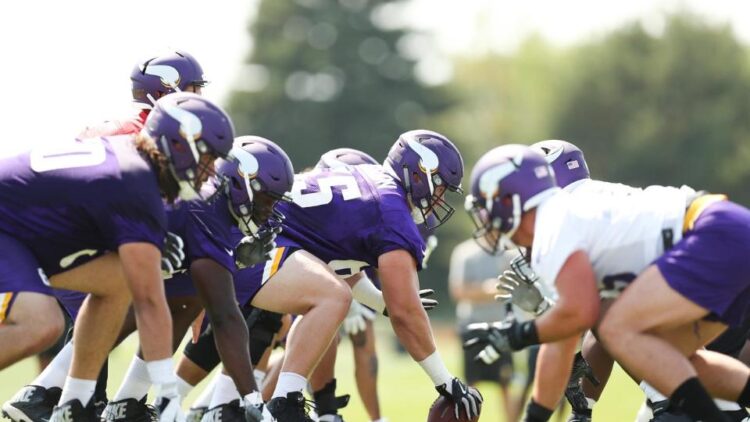 It’s no secret the Vikings’ offensive line had a rough 2016 season. Multiple players who were expected to make an impact up front were lost for a variety of reasons; Mike Harris didn’t play a snap all year due to an undisclosed illness or injury, Phil Loadholt retired before the season, and tackles Matt Kalil, Andre Smith and Jake Long all suffered season-ending injures.

To get an idea of how rough the situation really was, offensive line coach Tony Sparano recently told Pioneer Press writer Chris Tomasson that on more than one occasion, the team was only one injury away from having tight end David Morgan play lineman.

The series of unfortunate events, combined with inexperienced depth, resulted in historically poor offensive line play. Vikings starting quarterback Sam Bradford was sacked a career-high 37 times and the Vikings rushing attack was the worst in the NFL.

To remedy the situation, the Vikings rebuilt the unit from the outside-in this offseason. Two steady-if-unspectacular tackles were added in free agency to hold down the bookends. On the inside, a young center and guard were drafted to add potential to the aging interior line. The team also signed undrafted free agents for depth and competition in training camp.

As the team attempts to fix its most glaring issue, players will get an extended opportunity to gel in Mankato.

Alex Boone and Joe Berger are the incumbent starters from last season. Boone will remain at left guard, while Berger will make the move from center to right guard. Both players ranked solidly, according Pro Football Focus.

The starting center will be either Nick Easton or rookie Pat Elflein.

All backup positions are up for grabs.

Alex Boone: Boone held his own in 2016, but still failed to meet expectations. With a better surrounding cast, expectations will be even higher for Boone in 2017. The starting left guard will make $6.7 on the second of his four-year deal. Despite signing a four-year, $27 million contract in 2016, there is no guaranteed money in Boone’s contract after this season.

Joe Berger: While Berger started all 16 games at center for the Vikings last season, he’s expected to move to right guard in 2017 with Easton and Elflein competing at center. He’s due to make $1.88 million in the last of a two-year contract. Berger has been the type of player the Vikings want their young linemen to emulate. He’s a blue collar guy that paid his dues to become a starter in the NFL. The 35 year-old is likely playing his last season in the NFL.

Pat Elflein: The former Buckeye is looking to become the Vikings starting center in his rookie season. While he will face competition from teammate Nick Easton, Elflein is in the driver’s seat. As the Vikings begin training camp practices in pads tomorrow, he’s not the starter yet, but the position will soon become his to lose.

Danny Isidora: The rookie out of Miami has the potential to become the future right guard for the Vikings.

TJ Clemmings: Clemmings’ PFF grade last year was 28.2, last in the NFL among qualifying tackles. Why the Vikings continued to play him is astounding. He started 11 games last season. The team moved Clemmings to guard this season in hopes he can find his game.

Willie Beavers: Beavers has been moved back to tackle, as the second-year player struggled when he saw action at guard in 2016.

Starting center may be the most important position battle for the Vikings in training camp. Easton, who started five games last season, has seen first-team action with the Vikings this spring. Long-term, the Vikings would be wise to go with Elflein for the sake of continuity and experience.