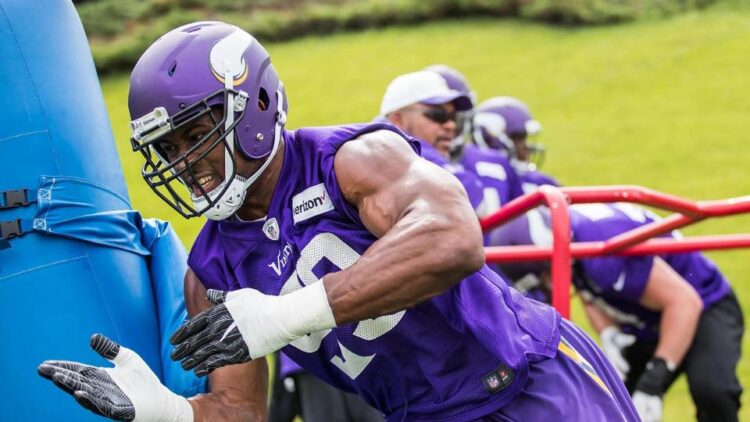 Minnesota has long been home to a handful of the most talented and devastating defensive ends in NFL history. Players such as Chris Doleman and Carl Eller began a lasting tradition that was reinvigorated by the acquisition of Jared Allen in 2008 following roughly a decade of substandard play. All three Vikings greats are gone now, but their legacy remains intact, and a new wave of purple and gold defensive ends has begun to make its mark since Mike Zimmer took control in 2014.

Since Zimmer’s arrival, Everson Griffen has established himself as one of the most well-rounded and effective 4-3 defensive ends in professional football; Brian Robison has continued to play at a high level well into his 30s; and former third-round pick Danielle Hunter has only scratched the surface of a potential that appears destined to dominate opposing offensive tackles for the next decade.

Who will join these three Vikings mainstays as part of potentially the best 4-3 defensive end group in the NFL? Well, that is what training camp is for, my friends.

Minnesota currently owns one of the very best defensive end situations in the NFL. The biggest question mark at the position heading into camp is whether Robison or Hunter will start opposite Griffen, leaving the odd-man-out to make the most out of a rotational role. Aside from picking between a pair of excellent starting options, the Vikings need to determine which player or players will fill out the rest of their defensive end depth chart.

Datone Jones, who may ultimately find himself listed on the defensive tackle depth chart when camp arrives, second-year late-round pick Stephen Weatherly and a quartet of rookies will battle it out for the remaining one or two spots. And while there may not be a “great” answer to this question, Minnesota and its fans can feel confident in its defensive end depth chart knowing that Griffen, Robison and Hunter will be there come September.

Everson Griffen: Few players at the defensive end position have been as consistent and successful as Griffen has been over the past three years. He has played 47 of a possible 48 games since Zimmer arrived and recorded 30.5 sacks over the same time period. Griffen has been the epitome of consistency for the Vikings both as a pass-rusher and as a run defender, making him as much of a lock to make this roster as anyone.

Brian Robison: The closing of the 2016 season brought about a significant change for the Vikings — two veterans, Adrian Peterson and Chad Greenway, both parted ways with the organization leaving a relatively young group to fend for itself. While Robison is still capable of producing consistently at 34 years old, it is his experience and demeanor that make him invaluable to Zimmer’s defense this season. Without Greenway to lead, the Vikings will likely look to guys like Robison to take the wheel — and steer players such as Eric Kendricks into leadership roles once his career is over.

Danielle Hunter: Hunter has played in just 30 games since Minnesota selected him in the third round two years ago, and despite having started just one of said contests, he has established himself as arguably the valuable member of the team’s roster. It appears as though only injury can stop him from unlocking the depths of his potential in 2017, and nothing he does during training camp will stop the Vikings from prohibiting his chance to ascend into elite territory.

Stephen Weatherly: Weatherly was selected during the 7th Round of the 2016 draft out of Vanderbilt, and, like many seventh-round selections, did not have much of an impact during his rookie season. He appeared in just two games during his rookie season and recorded one snap on defense, but the former Commodore does have one thing working in his favor: He is the only defensive end not named Griffen, Hunter or Robison with any on-field experience in Zimmer’s scheme.

Datone Jones: Jones finds himself in an interesting situation as he enters his first training camp with the Vikings. He may be listed as a defensive end, but Jones has the ability to line up at 3-technique and linebacker as well, which makes him an extremely valuable piece in a defense that needs positional versatility to employ many of its disguises.

To keep it simple, Jones can make this team without proving to be a Top-4 defensive end during training camp because his ability to flex inside make him a safer bet than some to make the 53-man roster.

Ifeadi Odenigbo, Tashawn Bower, Caleb Kidder & Sam McCaskill: Odenigbo, Bower, Kidder and McCaskill will all enter their first training camp in Minnesota as outside candidates to land a 53-man roster spot. Odenigbo and Bower likely have the best shots, respectively, to make the team out of training camp, but all four players appear destined to land on a practice squad for their rookie seasons — whether that is in Minnesota or somewhere else remains to be seen.

Weatherly will enter training camp as the favorite to man the final defensive end spot behind Griffen, Hunter and Robison. Despite just two appearances during his rookie season, he finds himself in an incumbent role, as the opposing cast of Odenigbo, Bower, Kidder and McCaskill lack any NFL experience whatsoever. Being in the driver’s seat isn’t necessarily a direct route to the 53-man roster, however, as all four of the aforementioned rookies offers different variations and levels of upside potential.

Odenigbo’s pass-rushing talent is well-documented, but his lack of experience as a run defender will put him at a significant disadvantage given Zimmer’s focus on stopping opposing rushing attacks first. Bower, despite being a mirror image to Hunter from a physical and athletic standpoint, lended no reason to suggest he can ascend the same way Hunter has during his time at Louisiana State. Kidder and McCaskill are in similar boats to previously mentioned pair, as both players have issues that must be resolved immediately in order for one to emerge with a roster spot.

There are questions to be answered all over the Vikings’ defensive end depth chart, but only one battle — Weatherly vs. The Field — will result in one player gaining an impact role and the remaining pieces being forced to find work on a practice squad.