Making Sense of the Vikings’ Pursuit of Alshon Jeffery 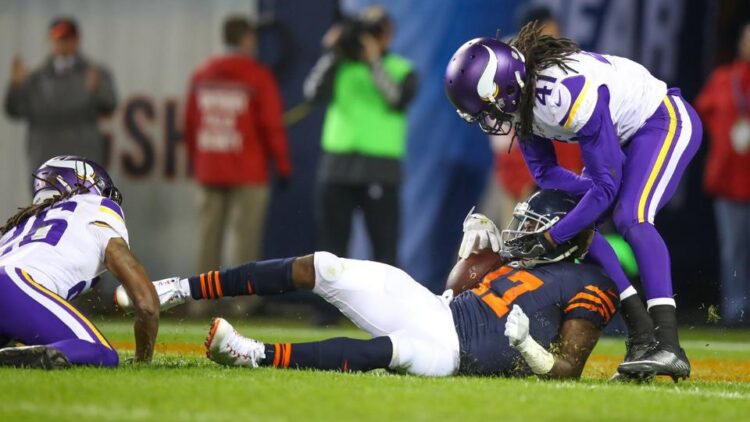 Can the unexpected disappoint? It’s a question I asked myself this afternoon as I watched tweet after tweet declare Alshon Jeffery a member of the Philadelphia Eagles.

Not more than an hour earlier, I’d heard—in real-time, with my own ears—Ian Rapoport interrupt a live NFL Network broadcast to break some unforeseen news: the Minnesota Vikings were “all in” on acquiring the free agent receiver from rival Chicago.

Mind you, I’m pretty even-keel,but Rapoport’s mention of “Minnesota” and “Jeffery” in the same breath nearly elicited a coffee-spitting reaction. I’d seen the receiver torch the Vikings as a member of the Bears, but not once did I imagine he’d potentially end up in purple and gold.

And not only were the Vikings pursuing Jeffery; general manager Rick Spielman was making a “strong push” to snag the star receiver away from the Bears, the Eagles, and the Colts.

Unfortunately for Spielman, those last-minute efforts left the Vikings empty-handed. Despite offering Jeffery a multi-year deal with “more security,” the newly-minted Eagle opted for a one-year, $14 million deal from Philadelphia.

Sitting at home, watching the news unfold across Tweetbot’s scrolling columns, I wasn’t sure what to make of the situation. The Vikings had just selected Laquon Treadwell in the first round of the 2016 NFL Draft, were expected to retain Adam Thielen with a second-round tender, and still see Stefon Diggs as a building block at wide receiver — why throw the bank at an expensive free agent like Jeffery?

I believe the answer starts with Treadwell. The underwhelming rookie finished 2016 with just one reception, though that 15-yard catch is old news by now. More often than not, he ended up on the Sunday sideline as a healthy scratch or victim to the injury bug. And when he did get the chance to play, Treadwell’s weaknesses—the ones I overlooked before the draft—stunted any of his progression and growth.

Maybe Rick Spielman and the Vikings are fighting a bout of buyer’s remorse with Treadwell. Maybe Treadwell was never the team’s first option; reports from Draft night indicate Will Fuller was the favorite among the coaching staff. Maybe Treadwell was the only realistic option for a franchise in need of help—on the field and in the public eye—at the receiver position.

Next up is the potential loss of other pass catchers from the 2016 roster. Both Charles Johnson and Cordarrelle Patterson became unrestricted free agents this afternoon, opening the possibility they’ll explore the open market. Of the two, Patterson will garner more immediate interest and may appeal to a team looking for more explosion from its skill players.

Declining to tender Johnson signals Minnesota’s intentions of letting the Norv Turner holdout wade into free agency. It also leaves the Vikings thin at the position, where Thielen, Diggs, and Jarius Wright truly are the only players with any extended experience. Cutting Wright would cost the Vikings $1.68 million in dead cap space; a small price to pay to offload Wright’s puzzling four-year, $14.8 million extension from 2014.

Given what we know, Spielman had plenty of motivation to pursue Jeffery: a seeming lack of confidence in Treadwell, a need for more talent at the position, a critical strike against an NFC North rival. So, why then, would Jeffery pass on Minnesota’s superior deal for a “tryout” contract in Philadelphia?

Immediately, a couple issues pop up. Jeffery wouldn’t necessarily be “the guy” in Minnesota like Thielen or Diggs, but in Philadelphia, he’d likely garner the most touches and targets of the corps. Jeffery’s also made lofty Super Bowl predictions in the past and could see the Eagles as a more legitimate contender than the Vikings in 2017.

And at $14 million, Jeffery’s contract with the Eagles could be worth more annually than Minnesota’s long-term offer. He’ll have a chance to shine next season, build his on-field resume after a down 2016, and entertain even richer figures when the salary cap increases—and he’s a free agent—in 2018.

Only Spielman and Jeffery know the specifics, but there’s plenty to unpack from one of Thursday’s more surprising stories. The Star Tribune’s Matt Vensel confirmed Minnesota’s pursuit of the coveted free agent later the day, further raising eyebrows and sparking questions of the Vikings’ motivations.

Will the Vikings save cap space and make an even bigger run next offseason? Was Rick Spielman bluffing to drive up Treadwell’s trade value?

.Back to my original question, though: can the unexpected disappoint? Fans suspected the Vikings would pursue a free agent receiver, but few, if any would’ve named Jeffery as the specific target.

At only 27 years old, with 13 100-yard games and a Pro Bowl selection to his name, Jeffery is the ultimate “missed connection.” Even with Treadwell waiting in the wings and the Thielen-Diggs combo creating meaninful production, the thought of Jeffery in Minnesota surely sparked butterflies in fans’ stomachs.

So yes, the unexpected can disappoint. If anything, it’s only created more questions, and that in it of itself is a disappointing.