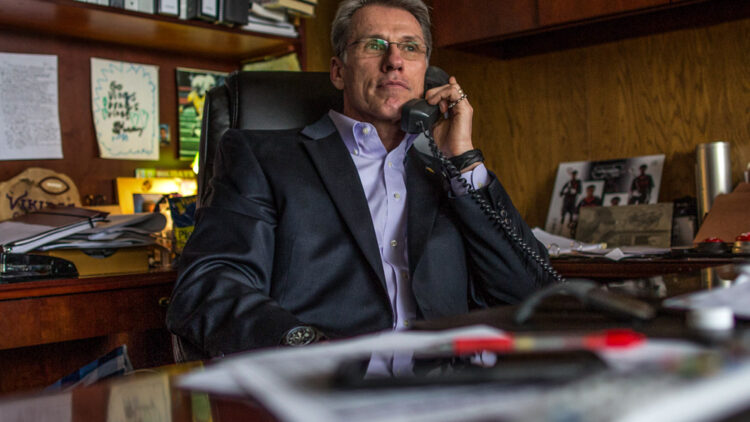 Sunday’s game felt especially meaningful for the Vikings; coming off a bye, with the first half of the season in the rearview mirror, Minnesota had a successful squad that hadn’t yet been greatly tested. It looked like an improved and well-rounded team, but there was no way to know if the success was due mostly to their own competence or their relatively soft, home-heavy schedule to that point.

The Redskins game looked to be a good test of this — a solid team, on the road, in a difficult environment. Many, including me, saw this as a stage for a possible letdown. A loss to Washington would have put a dent in the notion that the Vikings are legitimate NFC contenders, and probably bring on a tidal wave of concerns about another second half collapse. It was an important game, for morale as much as the standings.

With their 38-30 win at Washington, the Vikings answered a lot of questions, and solidified themselves as one of the elite teams in the NFC. And this is in large part because of the way their roster is constructed; deep, balanced, and talented. Rick Spielman has had an up and down tenure as the Vikings’ general manager, and opinions on him range widely. I’ve always been of the belief his personnel decisions have been more positive than negative, but no matter your personal feelings, it’s hard to argue that the 2017 Vikings aren’t his finest work yet.

Rick Spielman took a unit in shambles and turned it into a team strength in the course of one offseason. He methodically built one of the deepest rosters in the NFL, assembled a championship-caliber defense, and turned in what looks to be a historically good draft class. Let’s look at some of his key decisions that have helped shape this year’s Vikings:

With what amounted to one wave of the hand, Spielman snatched Reiff and Remmers in free agency and turned the Vikings’ biggest weakness into a strength. Coupled with the drafting of Pat Elflein (we’ll get to that), Spielman’s free agency additions brought talent and stability to the offensive line. Reiff has been fantastic at left tackle, anchoring the line and contributing to the team’s vastly improved pass protection. And for all the preseason handwringing about Remmers — good run blocker, terrible pass blocker, they said —  he’s been as advertised against the run and pleasantly solid in pass protection.

It’s deceptively difficult to find free agents to fill major roles, and it’s even harder to fix an offensive line in a single offseason — just ask Denver and Seattle. Spielman did both with the Reiff and Remmers signings.

It takes years to adequately judge a draft class, but even without the requisite time elapsed, it seems clear that Rick Spielman followed up a shaky (at best) 2016 draft with a home run in 2017. Without a first round pick, Spielman was able to find tremendous value in the middle rounds, and get immediate starters at key positions along with promising developmental pieces.

At the time Dalvin Cook‘s rookie season was cut short with an ACL injury, he was leading the NFL in rushing and displaying the type of dynamic versatility that makes it clear he will be a high-level starter for years to come. Meanwhile, Elflein is the only rookie center to start every game, and hasn’t allowed a sack in eight of nine. He’s shown excellent ability in open space and, along with the two new tackles, is the final piece in the successful offensive line overhaul. Elfien, like Cook, looks poised to be a long-term starter in Minnesota.

Fourth-round linebacker Ben Gedeon has been starting in base defenses, and Jaleel Johnson and Danny Isidora are being groomed as eventual contributors, as well. Combine that with intriguing talents like Rodney Adams and Stacy Coley (not to mention undrafted defensive end Tashawn Bower), and Rick Spielman has one of the stronger rookie classes in recent memory…without a first round pick.

Murray, of course, was signed to be the starter, but after the emergence of Cook he was relegated to a change of pace role. Post-Cook, however, Murray’s presence has been invaluable, allowing the run game to keep chugging in the hands of he and Jerick McKinnon. Spielman deserves credit for adding Murray when he did, and for eschewing “need” in favor of adding another talented player to the position in the draft. In doing that, he built tremendous depth at running back, and that’s precisely the reason the Vikings have been able to overcome the injury to their talented rookie.

And then, of course, Keenum. A signing that seemed like an afterthought in the offseason has proven to be the single most important roster move to keeping the 2017 Vikings afloat. Keenum stepped in for Sam Bradford and has compiled a 5-2 record as a starter (not counting the Bears game he entered in relief). He’s been up and down, sure, as was evident in his four touchdown, two (terrible) interception performance against the Redskins, but he runs the offense well and gives the team a chance to win each Sunday. At worst, he’s an elite NFL backup, and at best, he’s a middling starter worth far more than his $2 million salary. A less capable backup would have derailed the season after the Bradford injury, but with Keenum, the Vikings are riding a five-game winning streak.

There are more, of course — the ongoing construction of a top-flight defense, for example — and all in all, Rick Spielman has assembled a versatile and durable roster than can compete with any squad in the league in terms of pure talent. Simply for fixing an atrocious offensive line and securing the NFL’s best Plan B at quarterback, Spielman should be considered for executive of the year.

If nothing else, he has the Vikings set up for continued success in 2017, and for years to come.