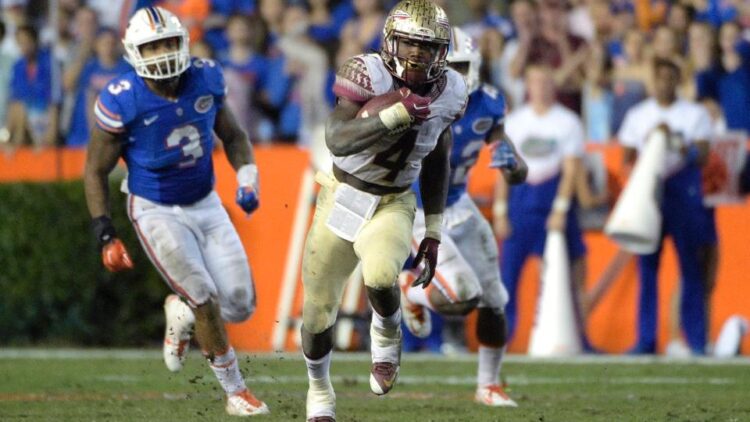 The first round of the 2017 Draft fell nicely for the Vikings. Teams focused primarily on defense and skill positions (and, um, quarterbacks), which allowed offensive lineman to steadily slide down the draft board; not a single blocker was selected until the Broncos took Garett Bolles at 20, the longest such wait in NFL history. So Minnesota, with its pressing needs up front—and at guard in particular—saw the second round begin with names such as Forrest Lamp, Cam Robinson, Pat Elflein, Dion Dawkins, and Dan Feeney all still available.

Some fans, including a few of us here at VT, advocated trading up to grab Lamp, a coveted and versatile prospect and the top guard on most boards. In the end, they did trade up, to pick 41, but instead Florida State running back Dalvin Cook.

By most accounts, Cook was a steal in the second round. He was widely considered a first round prospect, and was 14th on the Vikings Territory big board.

Here’s what folks around the web are saying about the Vikings second round pick:

“From a talent standpoint, it’s a steal. He has star ability, but there are concerns off the field.”

“Both Cook and Joe Mixon were still sitting on the board at 41, so the Vikings made a move up to address their RB situation (48 and 128 to Cincinnati). Cook isn’t a “clean” prospect, necessarily, but he was our top-ranked back. He’s a dynamic playmaker that will bolster that offense.”

“This might end up being the best pick in the 2017 NFL Draft. The fact that Dalvin Cook fell this far is ridiculous. I know he tested very poorly at the combine, but his vision, which isn’t taken into account via the analytics, is excellent. It’s an extremely important trait for a running back. The Vikings signed Latavius Murray, but no one really considers him to be a viable starter. Cook can be, and he’s a top-15 talent to boot. Great job by Minnesota with this selection.”

“Cook is Marshall Faulk on the field and a case of coaching insomnia the moment he leaves the team facility. His rap sheet includes a charge of assault against a woman (he was found not guilty), a criminal mischief charge involving a BB gun and broken car windows and a citation for mistreatment of puppies (he paid a fine).

I don’t think Cook is really a risk to end up leading off on CNN. He is a risk to end up like Aldon Smith, however: terror on the field, maybe a great guy in the locker room, but a victim of his own dubious choices after sunset. And that’s based on BB guns, barroom incidents and neglected puppies, not hearsay.

That said, the Vikings running game was utterly miserable last season: 75.3 yards per game, 3.2 yards per attempt (both league lows), just six plays of 20-plus yards. Free-agent arrival Latavius Murray is a pretty good back, but he never quite claimed a featured role for the Raiders, and their offensive line could actually block last year…”

“Dalvin Cook combines the best of Murray and McKinnon into one player.

He’s an exceptional athlete on film, showing fluid quickness and change of pace ability with the ball combined with blazing straight-line speed and acceleration (as evidenced by his sub-4.5 40-yard dash).

Cook boasts maybe the best vision in this class of running backs, which says quite a bit when stacked up against the likes of Leonard Fournette, Christian McCaffrey and Joe Mixon. The former Florida State Seminole uses his vision and acceleration together well, setting up his blocks well and exploding through the opening created by his linemen.”

“Vikings trade up for PFF’s highest-graded running back.

Health and off-field concerns dropped Cook to Day 2, but the Vikings felt they couldn’t risk waiting for him any longer and traded up with the Bengals for the former Seminole. Cook led the FBS in elusive rating, as he broke 99 total tackles last season. One major issue with his game is his ball security, as he fumbled 14 times in 763 career touches in college, but if he can maintain his health and stay focused on football, he could be a significant steal for the Vikings.”

"You've got a guy who can do everything for you."