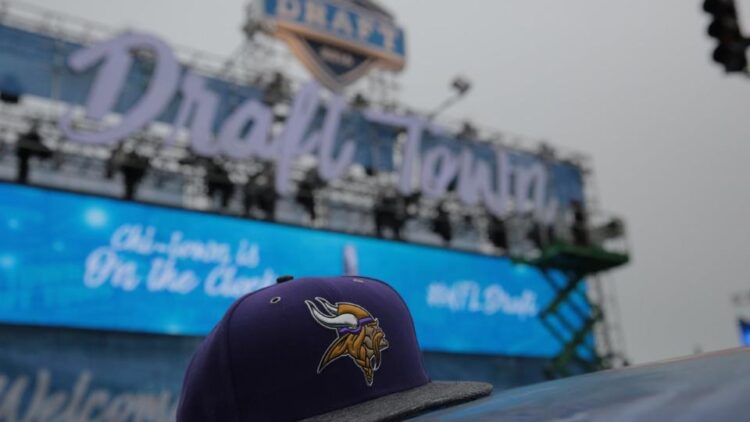 A few of his ‘hits’ in the middle rounds the past few years include: Rhett Ellison, Jerick McKinnon, Danielle Hunter and Stefon Diggs.

Every draft class contains several “diamonds in the rough” that exceed their perceived stock. Whether it’s overcoming red flags or simply improving on a weakness, these players become “steals” of the draft.

Danielle Hunter is a prime example. He declared for the draft out of LSU as an extremely raw prospect who possessed Greek god-like physical tools. In just two years, he’s developed exponentially faster than anyone expected and is now perceived as one of the best young players in the NFL.

Which prospects are the Danielle Hunters of the 2017 draft class?

The Vikings are lacking tight end depth after MyCole Pruitt and Rhett Ellison left the team in the past six months. Second-year man David Morgan is the current No. 2 tight end on the roster, but he doesn’t boast the receiving ability to replace Kyle Rudolph in the event of an injury.

Butt not only has a fantastic last name, but is the perfect addition to the Vikings’ tight end group. He’s a multi-dimensional player who excels both as a receiver and as a blocker. As a receiver, he is savvy at finding openings in zone defenses and using his 6’5″, 250-pound frame to make himself available to his quarterback.

Unlike several tight end prospects in this draft, Butt doesn’t possess incredible athleticism. And after surgery to repair a torn ACL in January, it’s feasible the second-round talent drops into the fourth round.

Acquiring Butt would also allow Rudolph to step into a mentor role; similar to the transition at defensive end with Brian Robison and Hunter. The move makes too much sense for Rick Spielman to pass up.

Minnesota has engaged with virtually every running back in this draft class. Unfortunately, Gallman, a four-down back who can be a quality contributor in several facets for Pat Shurmur, is not on the Vikings’ engagement list. .

As a ballcarrier, Gallman is mostly a one-cut runner with solid burst when the hole opens up. He is especially effective in short-yardage situations and adept at churning his feet through contact and using his 6’0″, 215-pound frame to his advantage.

The Vikings boast two different styles of running backs now, and each of them is essentially on a one-year deal in 2017. Gallman’s versatility would provide the Vikings plenty of options at the position in the future.

Griffin fits the mold for the prototypical Rick Spielman mid-round selection. He put up some insane NFL combine numbers that included a 4.38 40-yard dash, a 38.5-inch vertical leap, and a 132-inch broad jump. His athleticism lent itself to an aggressive playing style that was effective at UCF. Overall, Griffin allowed just 32.9 percent of passes thrown his way to be completed in 2016.

At 6’0″ and just under 200 pounds, Griffin boasts a solid frame to go with arms over 32 inches. His size and length, paired with pure athleticism, should open the eyes of many NFL scouts and general managers.

Griffin does have some technique and consistency issues that could be exposed as he transitions into the NFL. His acceleration is phenomenal—and it helped him put up such a terrific 40-yard time—but he plays slower than his speed when backpedaling and tracking receivers.

Minnesota has had success in recent seasons drafting raw, freakishly athletic prospects. Griffin fits that mold and would supply the Vikings with further depth at a position that requires plenty in today’s NFL.

Defensive tackle recently became one of Minnesota’s biggest needs, if not the biggest positional need due to Sharrif Floyd’s questionable future. The Vikings cannot comfortably move forward with the duo of Tom Johnson and Shamar Stephen filling in at 3-tech.

Johnson is a terrific option for the Vikings in the middle rounds. Many teams will look past him because of his average combine scores, but Johnson is a flat-out gamer when he puts on the pads. He boasts a relentless motor and a scrappiness that Zimmer and the entire coaching staff would appreciate.

One of Johnson’s best attributes is the use of his hands. He tactically swipes and jabs at offensive linemen to get them off balance and slip into the backfield with regularity. Plus, he has a pretty quick jump off the ball and solid push from his lower body. The 6’3″, 315-pound former Hawkeye will be a steal for whichever team is able to grab him in the third or fourth round.

Pocic might not be the most talented offensive lineman in this draft class, but he is the most versatile. He spent his career at LSU starting all over the offensive line against the toughest competition in college football.

While most of his success was at center, Pocic’s 6’6″, 315-pound frame and excellent lateral movement would provide depth for the Vikings across the board. As a guard, Pocic is a reliable pull blocker, using his light feet to effectively lead what was a potent rushing attack during his career as a Tiger.

The Vikings could certainly use offensive linemen, and Pocic is a good one that will be available in the third or fourth round. Given that he’ll be able to provide depth across the board at Minnesota’s weakest positional unit, Spielman would be crazy to pass on him.

The Vikings are in search mode for Chad Greenway’s replacement, and Reeves-Maybin has the potential to fill that role as a rookie. The former Volunteer is similar to Eric Kendricks in that he possesses a below average frame for the linebacker position, but makes up for it with excellent instincts and a downhill tendency.

Reeves-Maybin would also help the Vikings address what may have been their most devastating problem last season — defending tight ends. During his collegiate career, Reeves-Maybin lined up all over the field and covered opposing receivers of all shapes and forms, from scat backs to mammoth tight ends.

The Vikings rarely use three linebackers, but Reeves-Maybin would compete for that starting job from day one. His skillset translates perfectly as an outside linebacker in Zimmer’s defensive scheme and he would allow the Vikings to continue without a hitch in the nickel package should Kendricks or Anthony Barr go down with an injury.

Reeves-Maybin projects as a fourth-to-fifth rounder this week. If Spielman can stick to his guns and let the board fall to him, Reeves-Maybin would be an excellent value for the Vikings.

If Rick Spielman wants to trade up into the first round, who should he target? Find out here.