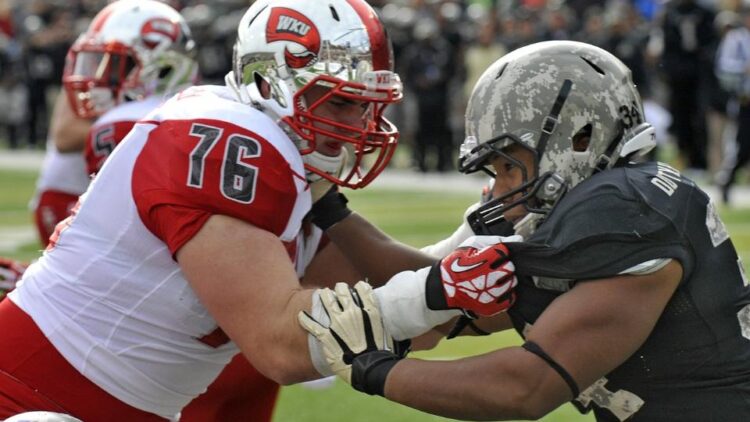 Minnesota Vikings general manager Rick Spielman is a restless man during the NFL Draft. When he’s not on the clock, he’s frantically making calls with other teams to improve Minnesota’s draft position. He has operated that way since he took over full reigns as general manager in 2012.

In his first three NFL Drafts, Spielman either moved Minnesota’s place in the draft or added a selection in the first round. He swooped an extra couple of picks from Cleveland in 2012 to move down one spot and was still able to get the guy he wanted in Matt Kalil. In 2013, Spielman selected three times in the first round, making trades with Seattle (before the draft) and New England to acquire picks that turned into Sharrif Floyd, Xavier Rhodes and Cordarrelle Patterson.

Spielman then pulled the trigger on a trade that moved the Vikings back into the last slot of the first round in 2014 to select Teddy Bridgewater.

“Slick Rick” didn’t make any such moves in the previous two drafts, but his track record indicates that type of maneuver is on his mind a week before the draft. It’s important to keep in mind that Spielman would likely need to give up the 48th overall pick and the 79th overall pick to move up into the bottom of the first. Depending on the prospects available, it might require more than that.

With all of this in mind, the question must be asked: If Spielman does pull the trigger on a trade into the first round, which prospects should he target?

The fundamental answer is easy: trade up for a guy with top-tier first round talent who has slipped through the cracks. Several candidates fit that bill in this year’s draft class.

Ramczyk is the complete package as an offensive tackle. At 6’6″ and 315 pounds, the former Badger possesses prototypical size for the position. Ramczyk’s powerful lower body makes him a mauler in the ground game, but he’s even more impressive as a pass protector. His extremely fluid footwork and veteran-like patience are both the best in the entire class at tackle. He also used his elite athleticism to be an effective pull blocker, something the Vikings could desperately use in their offense.

The concern surrounding Ramczyk is his lack of FBS experience. He spent his freshman and sophomore years dominating at Division III Wisconsin-Stevens Point before transferring to Wisconsin, where he was forced to sit out the 2015 season due to NCAA transfer rules. Among others at his position and rank in this draft class, Ramczyk has the least amount of experience against stiff competition. Most mocks have him slotted into the mid-to-low end of the first round.

Despite that, Ramczyk looked the part of a longtime starting NFL tackle as a Badger. According to Pro Football Focus, Ramczyk only allowed one sack and eight pressures in 14 games in 2016.

It’s not a secret the Vikings need offensive line help. In Ramczyk, some team will get a reliable starter at the second-most important position on offense for the next decade. If I’m Spielman and Ramczyk falls into the 25ish range, I’m picking up the phone and offering my 48th and 79th overall picks right away.

Minnesota’s defensive tackle situation became much cloudier when word of Sharrif Floyd’s nerve issue got out, putting his career in jeopardy. The Vikings are now left with Tom Johnson and Shamar Stephen to pair up with Linval Joseph, who is talented, but needs a competent partner in crime.

McDowell is a classic case of overwhelming talent hampered by issues outside of his production. He can do it all as a 3-tech. He’s explosive off the line of scrimmage, he slips past blockers with an array of moves and can rush the passer. He doesn’t always get the job done in the prettiest fashion, but he gets it done nonetheless. Most credible NFL Draft analysts would consider him a top-15 prospect, at the very least, based on talent alone.

Concerns about McDowell’s motor and coachability have led to the drop of his draft stock. Several teams weigh this type of issue differently than others, but it shouldn’t be too big of a deal for the Vikings. Mike Zimmer has become well-respected for getting the most out of his players and there’s no reason to believe McDowell wouldn’t fall in the same category.

Chad Greenway’s retirement opened up another hole in the Vikings defense at outside linebacker. As it stands now, a number of unproven options are slated to compete for the job next to Eric Kendricks and Anthony Barr.

A pretty convincing argument could be made for this position being the most important hole on the entire Vikings depth chart, not the offensive line. The Vikings were destroyed by opposing tight ends with regularity last season and it had a big impact on the team’s late-season slide.

Cunningham is the best coverage linebacker in this draft class. He has terrific instincts and simply has a nose for the football. Those type of traits are what Zimmer is looking for to fill Greenway’s role.

For Cunningham, reckless tackling has pulled his stock down enough to put him within the range of a trade by the Vikings. Stabilizing the tight end coverage group is a high priority for Minnesota, and acquiring Cunningham would go a long way to achieving that goal.

Lamp has emerged as the top guard in this draft class, despite spending most of his time at Western Kentucky playing tackle. He is extremely savvy with his hands, throwing jabs and landing solid punches to fluster pass rushers just enough to throw them off. He has a tremendous lower body that prevents him from getting beat on the bull rush and also aids him in the ground game.

Teams have almost universally identified Lamp as a guard instead of a tackle, which will inherently drop him due to the supply and demand of each position in the NFL. Luckily for Lamp, the Vikings could use offensive lineman of all shapes and forms — especially those with position versatility like his.

Lamp would fit right in as a potential starter from day one with the Vikings should Spielman pull the trigger on a trade.

I know, it might sound crazy that Howard could fall, because all indications are that he will be a top-10 pick. It might also sound crazy to move up for a tight end when Kyle Rudolph put together a career season at the position in 2016. But the addition of Howard wouldn’t just be about filling a positional need. Howard would satisfy a situational need, one the Vikings haven’t had in nearly a decade.

Howard heads a tight end class that is the best the NFL Draft has seen in at least a decade. He is a freakish athlete and is a matchup nightmare for opposing defenses; linebackers are too slow and defensive backs are too small. Plus, Howard has proven to be a solid blocker, although he’ll need to get a bit stronger to stay consistent in that area as a pro.

Minnesota’s tight end situation will likely be addressed in this draft one way or another. Rhett Ellison headed for the Giants and Mycole Pruitt departed last season for Chicago, leaving David Morgan as the backup. In addition to providing depth, Howard would also give the Vikings a go-to mismatch receiving weapon, something they haven’t had since Sidney Rice’s magical 2009 season.

Stefon Diggs and Adam Thielen have both found roles as precise route runners and possession-type receivers in Pat Shurmur’s West Coast scheme. The next addition to the puzzle is the go-to red zone mismatch that can line up all over the field, and Howard is that guy.

If Howard miraculously falls to the bottom half of the first round — and that’s a big if, Spielman better start making calls.

Be sure to check out the latest episode of the Vikings Territory roundtable, which can be found at VT’s official YouTube site. Don’t be afraid to subscribe!