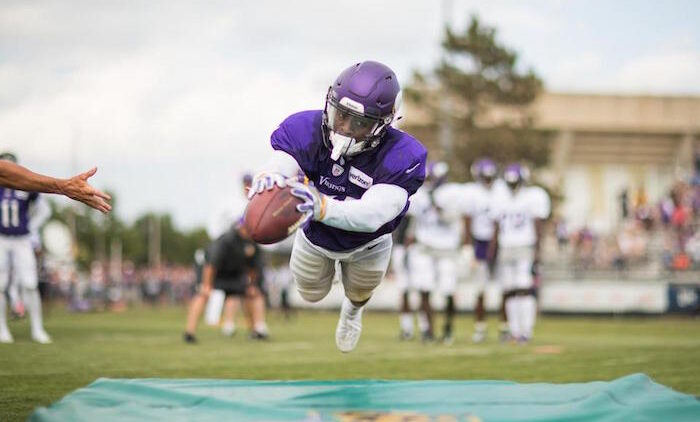 Things were a little different during the Minnesota Vikings first padded practice yesterday. Today’s practice should be similar in terms of intensity. The team has a day off tomorrow, so do not be surprised if the coaching staff pushes the players a little harder today.

As always, we will have the latest updates from camp as they happen.

2:40pm – Practice is just about to get underway and it could be a little wet out there today in Mankato.

Getting set for the afternoon practice. A pretty good crowd again. Looks like a couple quick rain showers might move through.

Some rain drops have made their way to the practice fields. Hopefully passing through quickly

2:50pm – Day four of Vikings training camp is now underway. Wide receiver Cordarelle Patterson is a non-participant once again while the status of running back Adrian Peterson is uncertain for today.

Vikings starting practice in the middle field with some kick return work as Sherels, Stoudermire, and Diggs take kick return reps so far.

2:55pm – Apparently the Vikings are not interested in playing in the rain today as the team is moving indoors. Practice is currently suspended until the rain passes by. Should resume within the next half hour depending on the weather. (What is this? Golf?)

Rain and lightning at #Vikings afternoon practice moves them into the locker room for a bit pic.twitter.com/iA62PYoZX7

#Vikings practice in a rain delay. Should resume in about 30 minutes.

3:05pm – The players are waiting inside for a little bit for the rain to pass by, but it seems as though Peterson will not be practicing in pads once again today based on his lack of padding in this clip.

#Vikings headed indoors. On a 30 minute delay for practice due to weather in Mankato. pic.twitter.com/unf4QuMl2F

3:10pm – Team now making their way back to the field. Do not be surprised if practice is a little sloppy today due to the rain.

And they’re back…. #Vikings out for practice again. pic.twitter.com/nBRO5XXXLf

Vikings heading back on the field again to resume practice.

More quality time with the chute. By the end of camp they won’t walk upright. pic.twitter.com/ZhRp5AafDN

Individual drills starting now. DL on sleds, DB’s working on hip swivel, QB’s on footwork, OL on staying low, and WR’s getting off the LOS.

3:25pm – The play of the backups in camp so far has been a bit underwhelming (trying to be nice here). Minnesota must feel strongly about Shaun Hill’s mentoring abilities because it is pretty apparent that he is not with the team for his skills on the field.

QB’s working on routes up the seam with the TE’s and Shaun Hill badly overthrew David Morgan. High throws have been a theme for him.

3:35pm – From everything that has been written so far about camp, Moritz Böhringer has been pretty impressive. He still has had some obvious bumps in the road, but players and coaches have been raving about his eagerness to learn each day.

Mobo looks over the wrong shoulder for an inaccurate Stave pass and has to readjust. Ball falls through his hands and he hits the dirt.

3:40pm – The offensive line is not the only Vikings unit that needs to improve their blocking abilities in 2016. A bunch of sacks were also given up last season by Minnesota’s running backs (figures the guy who needs the most help is not practicing today…).

LB’s testing the RB’s blocking skills and Zach Line got put on his back. Couldn’t see which LB it was from a distance.

Asiata looked the best out of all the running backs on the 1-on-1 blocking drill with the linebackers. McKinnon was better than last year.

3:45pm – Running back Jerick McKinnon being checked on by a trainer on the sideline. Does not seem to be anything serious but not a player Minnesota can afford to lose to an injury with Peterson already nursing an injury.

7 on 7s starting and Jerick McKinnon took a shot to the head/eye unsure but helmet is off on the sideline with a trainer.. Walking off okay

#Vikings RB Jerick McKinnon heading off the field with a towel over his head. Appears to be going towards the trainers tent.

3:50pm – With McKinnon and Peterson both out for now, Matt Asiata is seeing most of the first team reps at running back. This may his best chance to remind coaches why he has made the team in each of the past three seasons.

Goal line work and Asiata plunged into the end zone three times. Twice to the left, once to the right.

4:00pm – The intensity in practice has definitely picked up today. First with the goal line drill and now rookie wide receiver Laquon Treadwell has had himself a “Welcome to the NFL” moment.

Two scrums today, including one between Laquon Treadwell and Jabari Price. Both went to the ground, and Treadwell lost his helmet.

That was the second brouhaha today. Asiata-Lamur was the undercard.

4:05pm – Rookie safety Jayron Kearse has been tremendously impressive in camp so far and he is having another good day so far. Of course it is easier to play well when Minnesota’s backup quarterbacks are lobbing balls to defenders.

Jayron Kearse gets a pick off Joel Stave. Looked like he was the intended receiver. He wasn’t.

Jayron Kearse, who’s had an impressive start to camp, picks off Joel Stave. By the way, Kearse was my @MrMankatoVikes pick. #threepeat

Kearse has been around the ball for most of camp. Always ready to drop the shoulder too. Had a good last two days.

4:15pm – With Patterson out of action again today, some different players are getting an opportunity to return kicks in practice. Hard to imagine Patterson’s job as a returner is in jeopardy though, given that he has four kickoff returns for touchdowns in the past three seasons. It also seems as though McKinnon is back to the practice field now.

With Patterson out of practice Diggs, Stoudemire, Thielen, McKinnon, Sherels getting looks at return.

4:25pm – Offensive lineman T.J. Clemmings getting an opportunity to work with the first team today in camp. However, it does not seem like he will be part of the starting line up come opening day this season.

First play pressure off the right side, likely results in a sack #Clemmingspic.twitter.com/S0t0NRnfUV

4:30pm – Seems like the Vikings wide receivers are having an easier time getting open than they were yesterday. The battles between the receivers and the defensive backs has been one of the more intriguing position group matchups in camp so far this year.

Teddy steps into the pocket and misses an open Charles Johnson on a comeback. Looked like his arm may have been hit on the release.

11s.. Diggs pushes Newman upfield forces to flip hips and turn then stops on a dime leaps up for completion for 12 yards

4:40pm – Football is back and so is Mike Zimmer giving his players his an earful. Have to appreciate the fire Zimmer brings to the Vikings. He does it for their own good.

Could hear Zimm all the way in the stands “Get your ass outside”. He’s ready for the SZN

4:45pm – Minnesota’s defense not playing as well as they were yesterday. Still making plays, but the offense has definitely stepped up their game today.

Greenway has been doing well, but Kendricks has now twice lost TEs in coverage

Line picks up the blitz and Hill steps into the pocket to connect with Treadwell who beat Waynes on an out.

Treadwell pushes Waynes upfield enough to gain separation before his comeback.. Caught on TW for 12 yards

4:50pm – A new addition to Minnesota this past offseason, Emmanuel Lamur is getting plenty of opportunities to challenge for a starting spot on the team’s defense during camp so far. Veteran linebacker Chad Greenway’s days as a starter on this defense may be coming to an end sooner than people have thought.

4:55pm – Minnesota’s starting offensive lineman seem to be playing pretty well in camp so far. Much different story for their backups however. It could be another rough year for Teddy if anyone gets injured on the offensive line this season.

Sirles beaten by Trattou and B-Rob beats Clemmings on spin move. Beavers destroyed by Floyd. Sullivan handled by Stephen too.

DL OL drills done. Good showing by the DL, who definitively won the day. Boone only OL who stood out

5:00pm – The Vikings coaching staff has been trying to convince the media that their offensive line is much better this year. But apparently, they forgot to tell that to their lineman today…

Sparano is really in there coaching the OL between reps against the DL.

Special teams coverage work is taking place now. OL getting some extra work on the middle field with the coaches.

5:05pm – That is all for today from Vikings training camp in Mankato. The team has tomorrow off and will resume camp activities on Wednesday morning with their walk-thru at 10:30am (central time).

As always, we will have live coverage of everything relating to Vikings training camp each and everyday.