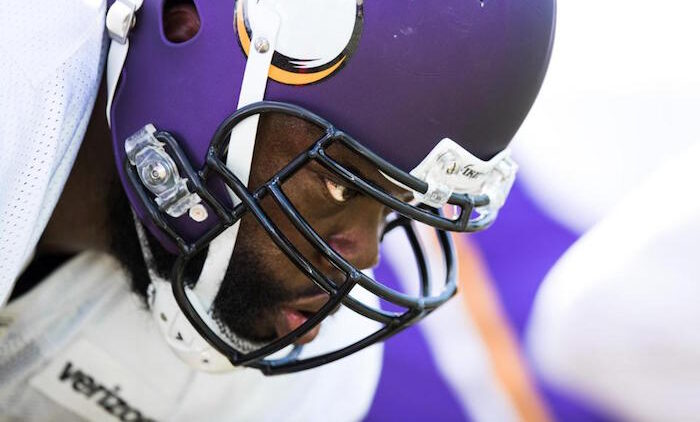 The first two days of Vikings training camp have been great and all, but the real fun starts with today’s afternoon practice when the players put the full pads on for the first time. Competitions in camp will now turn into battles and the coaching staff should get a better idea of what groups of players they feel can lead this team to success in 2016.

As was the case for the last two days, we will have the latest updates from the team’s practice as they happen live.

2:35pm – The young Vikings wide receivers have usually been some of the first players to hit the practice field in the afternoon. That trend continued today.

Böhringer, Sinkfield, Treadwell, and Stoudermire have always been coming out early to get work in with George Stewart. Out again today.

2:45pm – Practice is officially underway and some notable players look like they will not be participating in today’s padded activities. Adrian Peterson, Cordarrelle Patterson, and Mike Harris among the players not in pads this afternoon. Looks like the team is continuing to be cautious with Peterson. Interested to see how Jerick McKinnon plays in today’s practice with the absence of Peterson.

Mine Harris is out here, not in pads. Same with Ellison and Peterson.

Cordarrelle also not in pads

3:00pm – And the most awkward jersey of Vikings training camp goes to…

3:10pm – Adam Thielen getting some work in with the first team as a slot receiver. Wonder if this has anything to do with Patterson being injured? However, speaking in terms of 3-WR sets for the season, a combination of Charles Johnson and Laquon Treadwell on the outsides with Stefon Diggs on the inside could be a dangerous combination for this offense.

Thielen working some slot with the 1s. ?

3:15pm – Definitely seems like the intensity in the way the offensive line practices has stepped up this year. Much of that can be attributed to the Vikings new offensive line coach Tony Sparano. It would be quite a surprise if the team’s offensive line does not improve from a season ago.

Sparano right in the action for “the chutes” #VikingsCamppic.twitter.com/iQSXZqgJmS

3:20pm – Speaking of new assistant coaches, Pat Shurmur was brought in to be Minnesota’s new tight ends coach this offseason. Being that he is a former head coach and offensive coordinator, will his role on the staff be limited to just the tight ends in 2016?

Tight ends are working on their route running with Shurmur. All of them look good. WR’s working on engaging for blocks.

3:25pm – My pick for the Vikings illustrious ‘Mr. Mankato’ award, rookie tight end David Morgan has been turning heads with his receiving abilities. With Rhett Ellison currently injured and unable to practice, Morgan has a great opportunity to shine in front of the Vikings coaches right now.

David Morgan II is super fluid running intermediate routes. Already a great blocker. Huge opportunity for him with Ellison out.

3:30pm – And then there is Minnesota’s current backup quarterback situation…

Running backs working on pass catching. McKinnon and Pressley have the best hands. When on the sled, Asiata/McKinnon had good technique.

3:40pm – With the pads being put on today, it was known that practice would be way more physical. The receivers are already experiencing that first hand. They have had a pretty easy time getting open during the first two days of practice, but now that the pads are on the defensive backs are able to be more physical. More of an equal battle between the two sides today than in the past two days.

Bridgewater fade up the sideline to J-Wright. Good placement but a nice break up by Roberson at the last second.

3:55pm – Vikings now going through 11-on-11s. As stated before, the results should be different from days past given that the defense can actually use their physicality on the field today with everyone now in pads.

11-on-11 work. Teddy finds Thielen on a flag over the top of Munnerlyn.

Teddy tries to find Johnson on a fade up the sideline. Rhodes with great coverage on the play.

4:05pm – The defensive line could very well be the biggest strength for Minnesota heading into the season. The veteran leadership of Brian Robison and Everson Griffen combined with the beastly abilities of Linval Joseph and Danielle Hunter could give opposing quarterbacks nightmare all year long.

Linval Joseph blows up a run play to McKinnon in 11 on 11.

4:10pm – Minnesota’s defense seems to be playing much better in today’s practice with the addition of pads. Mike Zimmer and the rest of the Vikings defensive staff should be able to sleep a little more soundly tonight after the unit’s improvement on the field today.

Griffen gets of the edge for what probably would have been a sack. Teddy throws an errant pass that was picked by Sendejo.

4:20pm – Second-year cornerback Trae Waynes is hoping to become a starter on this defense for Week 1. A solid camp by him could make it hard for Minnesota’s staff to do just that.

Waynes and Treadwell battling has been fun to watch. Both big, physical and not afraid to bang on routes.

4:35pm – Team is back to 11-on-11s now and the defense is still impressive. They have a chance to be something special this season if everyone can remain healthy.

Defense looking a lot better. Forced a checkdown in first rep of final session of elevens

Stephen gets nice interior pressure to blow up a McKinnon run.

Appeared Mack Alexander got a little confused. Went to cover Rudolph outside and left a dragging Diggs open.

4:50pm – Minnesota can pay him all the money in the world, but it seems to be the same old story with offensive tackle Matt Kalil. Could be his last season with the Vikings if he does not show a significant improvement in 2016.

Griffen torches Kalil again. Probable sack, but Teddy throws it too far ahead Diggs against Newman

Andre Smith looking solid at RT. Kalil, on the other hand, just got smoked by Griffen on a rush.

Griffen with a power speed move that destroys Kalil. So quick off the ball.

5:00pm – Practice is coming to and end and the offensive and defensive lines are now facing off against each other in 1-on-1 battles. Seems as though the offensive lineman have more success in these situations than when they are lined up in 11-on-11s.

Kalil doesn’t handle Griffen as well the next time around. Linval pushing Sully around a little. Fusco looks better.

5:05pm – Kicker Blair Walsh finishing off practice with a couple field goal kicks. He made them all today, but all eyes will be on the Vikings young kicker this season to see if he can rebound from his missed kick in last year’s playoffs.

Blair Walsh goes 8-for-8 in his first kicks in team drills at camp. All were in the 29-to-41-yard range. #Vikings

This concludes our coverage of Vikings training camp for today. Come back tomorrow for MORE!