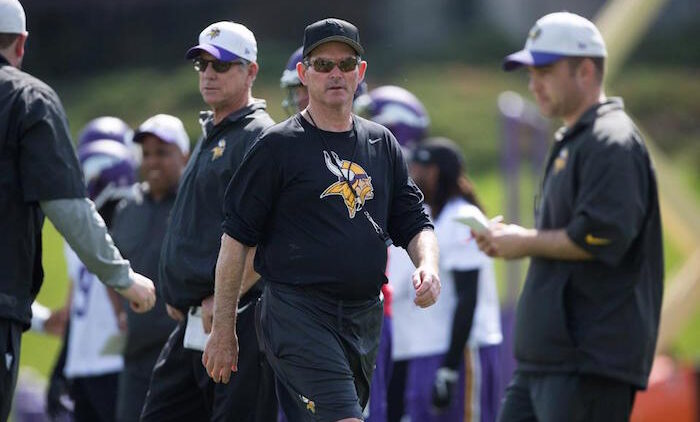 After having their first morning walk-thru of training camp this morning, the Minnesota Vikings will take the field for their first, actual practice at 2:45pm CT. The practice is expected to end around 5:15pm CT and then the team will be finished with football activities until tomorrow.

Join us below for the latest news and updates from today’s practice as Minnesota gets closer to Week 1 of the 2016 NFL season.

2:30pm – Vikings players have begun to make their way to the practice field.

A beautiful day down in Mankato for the afternoon practice. A few wide receivers are on the field early getting some extra work in.

2:45pm – The first Vikings training camp practice of 2016 is officially under way!

Practice is starting with the punt unit working on coverage. OL is working on technique such as hand placement and punch.

2:50pm – A couple Vikings fan favorites are beginning to hit the practice field.

These two have been through a lot together. @AdrianPeterson and @chadgreenway52 chatting before #Vikings practice. pic.twitter.com/IJzJEwXvZh

Teddy takes field for #Vikings camp #3. Debate: good year makes him how much $$? Can extend after year. Dalton $$? pic.twitter.com/WBSEXz609r

2:55pm – Many players getting an early shot at the Vikings punt return job. Can Sherels come out on top once again in 2016?

Sinkfield, Thielen, Sherels, Diggs, and Michel are all taking balls as punt returners.

Coach Sparano to the O-line, “Don’t be mechanical. Trust your feet and run.” #Vikings

3:20pm – Running back Adrian Peterson having his own personal training camp?

Adrian Peterson off on the side of Vikings practice doing individual running drills. Investigative team is on it.

Zimmer on opposite end of field to D-line: “What are we on a coffee break?” https://t.co/e37BISPMsC

3:35pm – Peterson must have just needed a little warm-up before he joined his teammates on the field.

After sprints with Sugarman, Adrian Peterson is back from field #3, grabs his helmet and rejoins RBs on field #1. #Vikings

3:40pm – The Vikings wide receivers making plenty of plays on day one.

Oh man… CJohnson just burned X Rhodes on a double move in 1on1s for a TD.. Two plays later Treadwell beats Price over the top for TD too!

Thielen with a nice adjustment on a ball. Every year he seems to look a little better as a receiver. Route running, technique, etc.

3:45pm – And the first interception of training camp goes to Mr. Antone Exum himself. Exum is looking to compete for the Vikings starting strong-safety next to Harrison Smith this season.

3:50pm – The Vikings wide receivers may be making plays, but that probably does not make Zimmer too happy about the play of his defensive backs. Consistently getting beat by receivers in 1-on-1 drills today.

Treadwell gets Xavier to bite deep while he stops short on a curl. Pass caught from Hill.

Love everything about Harry’s game but his man coverage skills on quicker shifty WR is where he struggles.. JWright gets him there #1on1s

Patterson had Newman beat on a fade but Teddy couldn’t quite connect.

Mackensie Alexander gets beat inside by Stoudermire. Not happy about it.

Rough start for Xavier Rhodes. He allowed three catches on three reps, including a TB-to-CJ deep ball after falling badly for a double move.

3:55pm – The 11-on-11 portion of Vikings practice has begun, with similar lineups from their walk-thru this morning.

11-on-11 now. Same defensive lineup as this morning. Sendejo and Greenway both in base.

4:00pm – Vikings first round draft pick Laquon Treadwell getting an early opportunity to shine on the first day of camp.

Laquon Treadwell now mixing in with the first-team offense. #Vikings

Laquon Treadwell got his first snap with the first-team offense. Was in a 3-WR set with Diggs and Thielen.

4:20pm – Make sure to follow the Minnesota Vikings official Snapchat account for even more, up to the minute training camp updates.

We’re giving you a look at our first #VikingsCamp practice on our @Snapchat.

4:25pm – Never thought of as the best at his position on the team, but linebacker Audie Cole still seems to frequently make plays on the football field.

4:35pm – Vikings ending their first practice of training camp off with more 11-on-11 drills.

Bridgewater continuing to utilize his hard count, just got Floyd to jump #Vikings

4:40pm – Coaches experimenting early in camp with different players in the defensive backfield.

Harris and Exum switching off between second and third team at safety.

4:55pm – Rookies and backups getting plenty of opportunities to make plays for the Vikings in practice today.

Stave with a great arm. He overthrows it by a few yards deep but it had zip.

Now rookie TE David Morgan getting in on the action.. Two completions in a row on underneath stuff from Stave (has a gun)

5:00pm – Day one of Vikings training camp has come to a close.

#Vikings‘ first practice of training camp is in the books. Peterson did some light work, but didn’t participate in team drills.

Be sure to check back to the site tomorrow for complete coverage of the Vikings second day at training camp!