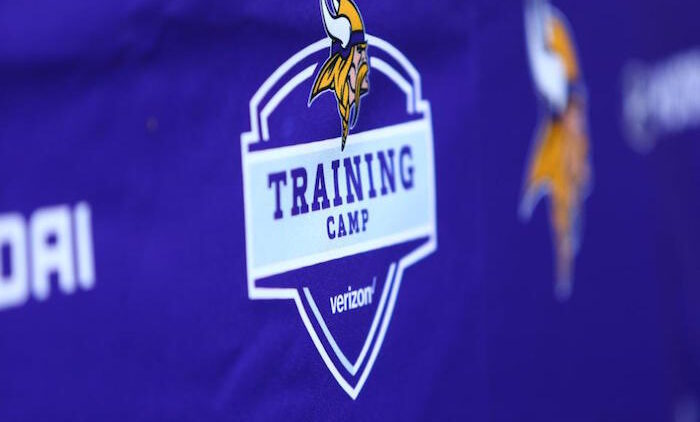 The Minnesota Vikings are a step closer to playing a meaningful football game as they hit the field in Mankato for their first training camp practice of the year.

Join us below as we will be updating this post throughout the day with constant Vikings training camp coverage.

Only about 40 minutes away from the Vikings kicking off training camp with a morning walkthrough. pic.twitter.com/SPi2Z9YrXm

10:20am – Vikings players are beginning to hit the practice field for their first walk-thru.

The horn blows and 2016 training camp is underway.

10:40am – First team offenses and defenses take the field. No real surprises on defense besides maybe cornerback Terence Newman. Wide receiver Charles Johnson and center John Sullivan in with the first team offense.

10:50am – No Mike Harris on either the first or second team offensive line. Perhaps an injury?

Waynes and Price are running with the twos at cornerback. E. Robinson, Cole, Lamur at LB. Griffin and Exum at safety.

11:00am – The battle for the first team nickel corner between Captain Munnerlyn and Mackensie Alexander will be a good one to watch this summer.

11:10am – Vikings mixing it up with a few players on each of their defensive units throughout their walk-thru.

Lamur getting a few rotations in with the first team now at LB with Barr/Kendricks.

11:15am – He will have plenty more chances during training camp, but the Moritz Böhringer era in Minnesota is off to a rough start. Deep breaths kid, settle down.

11:25am – Marcuse Sherels may see some competition for his role as the team’s punt returner from Stefon Diggs this summer. Something to keep an eye on during training camp and the preseason.

Troy Stoudermire, Marcus Sherels, and Stefon Diggs look to be the guys that will get punt return looks.

11:30am – The Vikings first walk-thru of training camp is over and they will hit the field again at 2:45pm for an actual football practice.