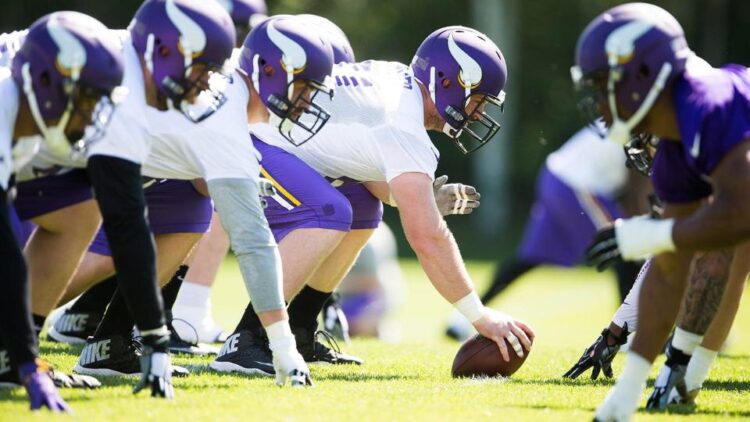 This 10-part series focuses on the biggest questions facing the Vikings as they head into Mankato for their training camp festivities. Be sure to answer the first five questions HERE, HERE, HERE, HERE, and HERE.

There’s a belief hanging around the Minnesota Vikings that the team will suddenly contend for a Lombardi Trophy. After an offseason of free agent signings and coaching changes, the Vikings appear destined for greatness beyond the Wild Card round of the playoffs. Veterans are returning to full strength, new additions are pushing for starting jobs, and Teddy Bridgewater appears ready to take the next step.

But they won’t have a shot at a Super Bowl if the offensive line is broken. It’s the most crucial question facing the Vikings heading into 2016, and it’s a question that won’t be answered until the regular season begins. General manager Rick Spielman set his roster up to succeed, but it’s on the players at each position to embrace the competition and improve on a disappointing 2015 season.

Old faces, new names, and unknowns make up the 16-man depth chart, which will surely experience changes as the team runs through training camp. A step-by-step walk down the line reveals the strengths, weaknesses, and question marks facing the unit as they prepare for a challenging offseason.

It’s now or never for Matt Kalil, who enters his fifth season with the Vikings. The fourth-overall pick of the 2012 NFL Draft is now Minnesota’s most expensive lineman; the team retained Kalil after the March 9 deadline, guaranteeing this entire $11.096 million salary for the 2016 season.

Kalil’s play since his stellar rookie season has been nothing short of disappointing. He’s battled knee injuries since 2013 and will enter training camp the healthiest he’s been since that Pro Bowl performance. While it’s encouraging to know Kalil is healthy, he still has to exercise the mental demons holding his play back, including missed blocking assignments and inexplicable penalties.

His subpar play in 2015 — including 44 pressures allowed — earned Kalil a 47.1 grade from Pro Football Focus. That was an improvement on Kalil’s atrocious 2014 season, but far from what’s expected of a first round draft pick. If he’s to earn a long-term contract after 2016, Kalil will need to prove 2012 wasn’t a fluke, but a vision of what the left tackle can offer the Vikings for years to come.

T.J. Clemmings can play both tackle spots, but he’s far from challenging Kalil for starting duties. And with such a high price tag, the Vikings are stuck with Kalil as the presumptive starter.

The Vikings wouldn’t sign Boone to a four-year, $26.8 million contract if the front office didn’t think he could fix some of the offensive line’s problems. He may not be the All-Pro he was in 2012, but Boone offers more than Brandon Fusco did at the same position last season. Like Kalil, he’s the presumptive starter on the left side of the line and faces no real competition.

Aside from his talents after the snap, Boone will serve as a mentor to Kalil and a lighting rod to the rest of the offensive line. He’s quickly become a favorite member of the franchise, from both the fanbase and his on-field teammates.

“He definitely lightens the mood, but when it’s time to get serious, he’s probably got a million pages of notes; I see that guy taking notes non-stop,” Kalil said of Boone, per ESPN’s Ben Goessling. “He’s a good teammate to learn from, as well, and he’s had a lot of success in the NFL. I’m excited to have a guy like that on our team.”

The transition from the left side of the line to the right reveals much less certainty. In the middle, Joe Berger and John Sullivan are battling to become Minnesota’s starting center. Berger, Pro Football Focus’s top-ranked center in 2015, suddenly finds himself in the thick of a heated battle with nine-year veteran Sullivan.

Sullivan missed all of 2015 with a back injury, but told Chris Tomasson of the Pioneer Press that he’s been full-go since April 18, when the Vikings began offseason workouts. “If I come back healthy, my back’s fully recovered, I expect to be back in my same role,” Sullivan said.

Since taking over in 2009 (and before his injury pre-2015), Sullivan had missed just seven games for the Vikings. A fully healthy back would — fingers crossed — allow Sullivan to return to the middle and aid with things like pre-snap adjustments, blitz pickups, and overall communication.

Regardless of who wins the job, the Vikings are in solid hands with either Sullivan or Berger. Sullivan, according to ESPN 1500, took most of the starting reps at minicamp with Berger filling in at left guard.

After a failed experiment at left guard, Brandon Fusco makes his return to the right side of the line, where he previously earned a five-year extension from the Vikings. However, he isn’t walking into a starting spot; he’ll need to wrestle it away from incumbent starter Mike Harris.

“I feel like I’m back at home, just have to show the coaches,” Fusco said, per ESPN 1500. “I know it’s a big competition now with me and Mike [Harris]. Across the board, everyone is in a competition. It’s going to make us all better. Just have to improve each day and show I can be the player I once was at right guard.”

Harris started every game for the Vikings at right guard last season after making a surprisingly successful transition to the inside. He was a road grader, opening holes for Adrian Peterson on sweeps and power run plays. This offseason, he signed a one-year contract, taking less money to remain in Minnesota as the team’s starting right guard.

Fusco took most of the starting reps at minicamp with Harris limited by injury, per ESPN 1500.

According to ESPN 1500, Smith and Loadholt split starting reps at minicamp in what shapes up to be the most competitive battle this offseason. Motivated to return from a torn achilles tendon and make up for a lost 2015 season, Loadholt will do all he can to win his job back. That started by taking a pay cut to remain with the Vikings, as Loadholt did when he signed a one-year, $2 million contract this offseason.

Ben Goessling at ESPN believes Loadholt will fall victim to the 53-man roster cuts, opening the door for Smith to open the season as the starting right tackle. He played the same position for the Cincinnati Bengals before signing a one-year, $3.5 million deal with the Vikings in free agency.

Plenty will change when training camp begins, but for now, Zimmer sees improvement in the unit.