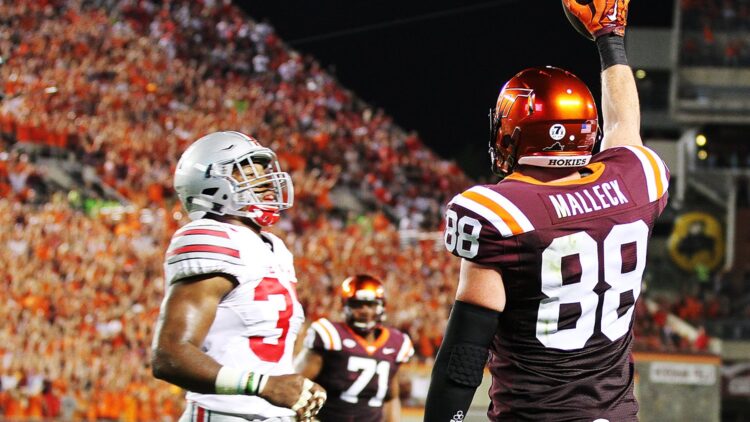 [NOTE: This Ryan Malleck Scouting Report is a part of our “Sunday Sleeper” series highlighting some later-round options available to the Vikings on Draft Weekend. It is also a part of our goal to amass as many Vikings slanted scouting reports as possible. To track our constantly growing list of scouting reports you can CLICK HERE. For more great coverage of the NFL Draft please be sure to visit our partners at Draft Season.]

Malleck is unlikely to turn heads with his athleticism in Indianapolis this year, but that isn’t going to be what interests NFL teams about the Virginia product. Malleck will attempt to earn his NFL paycheck as a blocking tight end in a rookie class that features very few.

7th round or undrafted free agent pickup. Should be available with minimal investment unless he sprouts wings or inherits super hero powers prior tot he NFL Combine.

A hefty frame ideal for a tight end that will be called upon to move the line of scrimmage.

A physical player that doesn’t shy away from contact at the line or after the catch.

Can be depended on to run block well in space or in a phone booth.

Adequate pass blocking skills that can be used to help keep the pocket clean.

Could be a weapon used to catch opponents off guard in the red zone.

A smooth release off the line of scrimmage.

Has the power to burst through arm tackle attempts.

Awareness made him a quality checkdown option for Virginia Tech on a weekly basis.

Lacks the athleticism to be a true threat in the passing game.

Adjustment and reaction seems slow when the ball is in the air.

Lacks game-changing speed which puts a ceiling on his potential.

An injury history extensive enough to require some investigation at the Combine and during a pro day.

Walford was a more heralded prospect than I expect Malleck to be, but they have similar frames and skill sets. Each are versatile enough to contribute in multiple roles (blocking, pass catching, and special teams), but come with tempered expectations. I would also say that Walford has a leg up on Malleck in terms of being a pass catching weapon. Walford was able to play all 16 games for Oakland as a rookie, catching 38 passes for 329 yards and three scores.

Rhett Ellison’s free agent status makes him a question mark for 201 and beyond. His late-season injury makes that question mark appear in bold font. Our own Austin Belisle recently outlined how extensively the Vikings relied on Ellison and his various skills this last season, so it is disappointing to think that he may not be available moving forward, or that he may take an extended time to get back to playing the way we’ve all grown to expect.

Ideally, the Vikings could find a blocking tight end to fill Ellison’s shoes until he is ready to return. Of course, that short-term solution would be auditioning for a long-term role within Norv Turner’s offense, but the Vikings cannot really afford to invest a great deal into the position with Kyle Rudolph concreted at the top of the depth chart.

A hard-nosed blocker, with a versatile enough skill set, like Malleck might be just what the doctor ordered for this unit heading into Mankato likely without Ellison available. A sixth or seventh round flier could convert, in this case, into a dependable option for the Vikings if even for a couple of games.