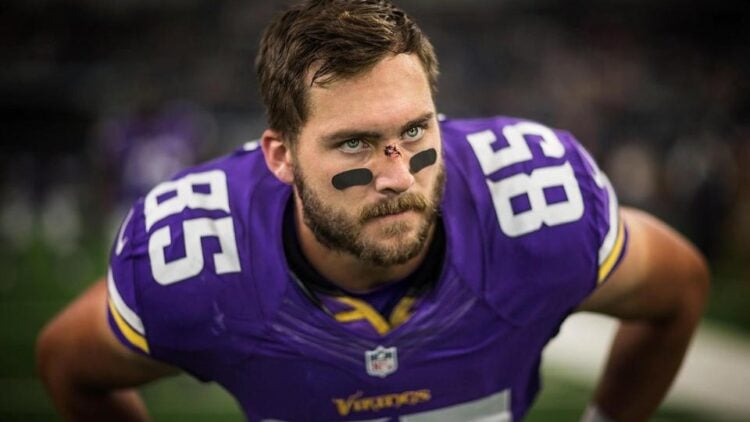 Rhett Ellison tries to stand up, but his right knee won’t let him. One step, and the leg gives out. Something’s wrong. Seriously wrong.

There’s a little over 11 minutes left in the fourth quarter of the NFC Championship Game, and Teddy Bridgewater throws a pass to Ellison out of the backfield. The tight end turns upfield, but Green Bay Packers linebacker Nick Perry pulls him down from behind. His right leg gets stuck in the ground and suddenly “pops.” It’s a torn patellar tendon, an injury that’ll keep him down for at least six months.

Down, but not out. That’s because Ellison represents every cliché in the football book; tough, gritty, hardworking, reliable. An injury is just another obstacle, much like the defenders he meets in the trenches or safeties swarming to tackle him down the field. It’s Ellison’s job to recover and make it back onto the field this offseason, and it’s a job he’ll gladly accept.

No matter what the Vikings have asked of Ellison, he’s done so without hesitation. Line up in front of Adrian Peterson as a fullback? Check. Spilt out as a slot wide receiver? Check? Contribute on every special teams unit? Check. He’s the Swiss Army Knife in Mike Zimmer’s pocket, and the tool these Vikings will need in 2016. Set to become a free agent this March, Ellison deserves one more shot in Minnesota, whether fully healthy or not. Without him, the Vikings are another crucial piece away from the Super Bowl.

Ellison’s sporting roots run deep. His father, Riki Ellison, was a 2-time Super Bowl champion and 10-year veteran in the NFL. As a child, he spent three years in his family’s homeland of New Zealand, where he played rugby and cricket. It was in Christchurch, the largest city on New Zealand’s southern island, where Riki believes Rhett developed such a feel for American football.

[quote_box_center]”I think it really gives him self-awareness and self-confidence,” Riki Ellison said, per ESPN’s Ben Goessling. “Contact, tackling, it’s part of his bloodline. Rugby really spurred on football. There’s commonality between both sports; both were basically developed as training mechanisms for the military. I think he really understood what his roots were. He can see the plaques of his (great-great uncle). He has great confidence of what he does. Rugby is a team game. It’s not an individual sport game. Their players are much more humble than our players. There’s a different culture there, in playing the game a sportsman. Rhett resembles a little bit of that.”[/quote_box_center]

When he returned to the United States at seven years old, Ellison followed in his father’s footsteps. At St. Francis High School in Mountain View, California, he finished his senior season in 2006 with 49 tackles, two sacks and one interception on defense and 31 receptions for 394 yards (12.7 avg.) with two touchdowns on offense. His performance was enough to earn a scholarship to USC, where his father was a lettered linebacker for four years and All-Conference honoree in 1979. There, Ellison shined as a do-it-all tight end, whose blocking and receiving skills made him an intriguing draft prospect after the 2011 season.

Though he finished his collegiate career with just 31 catches for 338 yards and four touchdowns, Ellison’s equal talents as an inline blocker and receiver were enough to vault him to the top of the “sleeper” draft rankings. As Chip Scoggins of the Star Tribune wrote before the 2012 NFL Draft, Ellison received a last-minute invitation to the combine as a fullback.

He may have been labeled a fullback in Indianapolis, but the Vikings saw him as much more than that when they selected in the fourth round of that year’s draft. “He’s a hybrid tight end who can block along the line, motion across the formation or play fullback in short-yardage situations,” Scoggins wrote. And when training camp opened in July, Ellison ran onto the field wearing the familiar No. 40 — the same number Jim Kleinsasser wore when he played much the same role.

After the draft, NFL.com draft analyst Bucky Books said that Ellison had “flashed strength and toughness as a blocker” in college, but needed to “become more consistent to win the job.” He didn’t take the job from the incumbent fullback, Jerome Felton, but Ellison proved his worth in a limited number of snaps. According to Pro Football Focus, Ellison played just 251 snaps at fullback, compared to Felton’s 402.

Despite the disparity, the rookie tight end/fullback finished the year with a “+15.8 overall grade and a +9.8 grade in run blocking — both the highest mark in the NFC and second in the NFL behind the great Vonta Leach. Those marks led the analytics site to call Ellison a “secret superstar” after the season. He may not be a traditional superstar by today’s NFL standards, but that’s exactly what he’s become in Minnesota.

“Rhett [Ellison] is a guy who can really do an awful lot of things,” Vikings Head Coach Mike Zimmer said after the tight end’s Week 17 injury. “He helps in protection and helps with blocking in the running-game. He has done a good job, really, with everything. He is a smart guy. We’re going to miss him. Rhett is a good football player and probably even a better person.”

When Zimmer says Ellison can do an awful lot of things, he’s right. Over the course of his four-year career, the Vikings have asked Ellison to do everything, and he’s done everything well. From blocking for Cordarrelle Patterson on kick returns to wrangling in punt returners as part of the coverage team, he’s the perfect plug-and-play piece in all three phases of the game. Who knows, Ellison could very well make an serviceable linebacker. The screenshots below demonstrate Ellison’s meaningful contributions in a number of different spots on the field.

It’s a testament to Ellison that he’s become such a malleable piece of Minnesota’s equation. In a world where nine-year veteran Adrian Peterson still hasn’t learned to hold onto the football or protect the quarterback, Ellison’s found ways to redefine himself in under half that time. And his transformation goes deeper than changing his number from 40 to 85 before the 2014 season. The process began his senior year at USC, and helped define the player he is today.

“I think it was my senior year when they moved me to fullback, Ellison said in an interview with Craig Peters last season. “It was probably the best thing that could have ever happened to me because I understood the game from a back’s perspective, and it really helped me understand blocking schemes, kind of the big picture of everything. They’re two different positions, so I think having that experience before coming here was huge in helping my versatility.”

Ellison went on to describe blocking as a sort of introspective action. “First and foremost, it’s your technique, your footwork, your hand placement, getting yourself in the right position and then it’s the finish part of it, and that’s kind of, ‘How much do you want it?’,” he said. Clearly, Ellison wants it enough to carve himself a role with the team. Beyond his blocking, he’s become a viable option in the passing game, especially for second-year, Pro Bowl quarterback Teddy Bridgewater.

The career stats for a player like Ellison don’t jump off the screen, but the trend is obvious; Ellison has become an integral part of the Vikings’ offense. In his first two seasons, he had a combined 12 receptions for just 126 yards. The following two years, he combined for 30 catches, 332 yards, and two receiving touchdowns. With Kyle Rudolph sidelined for much of 2014, Ellison joined Chase Ford in an effort to replace the fallen starter’s production.

That year, Ellison was targeted 26 times — seven more than his first two seasons combined. It’s no surprise that Ellison’s involvement grew with the arrival of a quarterback like Bridgewater, but much of that has to do with Ellison’s own hard work. He became more than just the fullback or a “Kleinsasser 2.0.” With the number change, he transformed himself into the arguably, one of the Vikings’ most important offensive players.

As a receiver, Ellison’s greatest strengths are his ability to pick up yards after the catch and extend plays. His running mate and the team’s current starter, Kyle Rudolph, has never been known for his outstanding athleticism. Though Rudolph’s a bigger, lengthier receiver, he lacks the explosive ability to run away from defenders and break tackles on a consistent basis. Ellison, on the other hand, seems to pick up extra yards on nearly every one of his catches. He’s deceptively fast for his size, and though he ran a slower 40-yard dash than Rudolph, plays with much more “game speed” with the ball in his hands. Below, a look at some of Ellison’s most impressive catches and runs.

Last, but certainly not least, is Ellison’s hallmark talent — blocking. He came into the league as a dynamic blocker and has only gotten better with time. As ESPN 1500’s Andrew Krammer wrote this offseason, his increased role in the running game was made possible by the return of Adrian Peterson. With two injured starters along the offensive line and Peterson rearing to go in the backfield, it only made sense for Turner to rely more heavily on “heavy” sets — two and three-tight end formations. According to Krammer, the 1,522 snaps divvied up between Rudolph, Ellison and rookie MyCole Pruitt were the most for the offense over the last four years.

The “multiple-TE sets” were used as a way to counter Minnesota’s issues at the line of scrimmage, both when blocking for Peterson and protecting Bridgewater. Ellison played 479 offensive snaps (44 percent) and saw time as both an inline blocker and backfield pass protector. In the 98 instances he “stayed home” to block, Ellison allowed just three QB hurries. Often times, he’d motion into the formation, serving as added help on the edges with tackles Matt Kalil and T.J. Clemmings. Ellison’s de-cleating block of Broncos defensive end Von Miller quickly went viral during the Vikings’ Week 4 matchup in Denver.

And as a lead blocker in the running game, he was exceptional, showing sudden quickness in tight spaces to spring Peterson and Jerick McKinnon free. Not only does Ellison have the strength and leverage to get underneath defensive ends, but he’s a skilled technician in the trenches. Because of his athleticism, Ellison can maneuver running lanes and chip multiple defenders in stride all while keeping his balance in the condensed areas of the defense. The slideshow below shows a few of Ellison’s key blocks this season, including one where he blocked three defenders own the field.

When Ellison went down in Week 17, Vikings fans collectively gasped in horror. It’s not often a second-string tight end can garner that much emotion from a fan base, but Ellison’s importance to the team is clear to all. Yes, he’s the Vikings’ best blocking skill player, but he’s also much more than a blocking tight end. He’s a receiver. A pass protector. A kick returner. A cog in Minnesota’s Super Bowl machinations.

It’ll take a speedy recovery for Ellison to return in time for training camp, but knowing his work ethic, that shouldn’t be a problem. The Vikings may not sign their tight end to a new contract until they know he’s fully healthy, though the risk is worth the potential reward. Ellison’s shown his faith and commitment to the team; it’s time the Vikings return the effort. If Rick Spielman’s comments after the injury were any indication, the Vikings share this sentiment.

[quote_center]“Rhett’s work ethic and contributions to this team run deep. “His commitment to doing his job, which includes a lot of dirty work, is a big reason why we were able to win the NFC North.” [/quote_center]